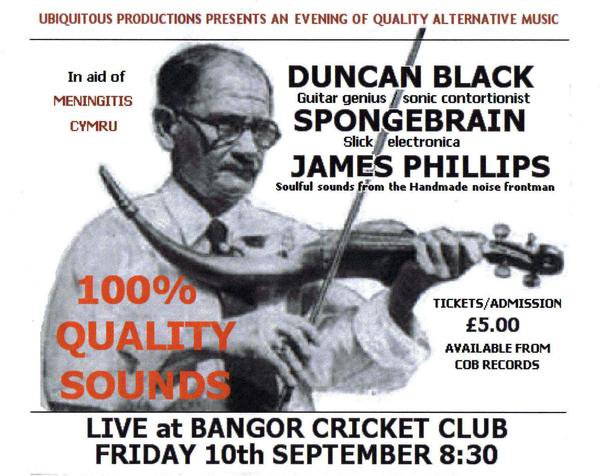 The last time I visited this hallowed ground was over a decade ago to see Vaffan Coulo supporting Gorky’s Zygotic Mynci, only to be told by a pissed up Trifle as part of his general abuse at the crowd that “if you’re not from Bangor what the fuck you doing here?”. Naturally I took it to heart and have shunned the place since only calling a truce to my grudge for this evening’s obscure entertainment. Echoes of the Banquent Ethania diverse mix, again with Mr Black’s presence at the scene of the crime, some-one should put two and two together.

Good turn-out that made the place seem reasonably busy, all helping for the contributions to the Meningitis Cymru charidee it’s in aid of. First up is a solo spot by James from Hand Made Noise, just him, his voice and his semi acoustic. At first there’s not the clarity in the sound mix to hear what’s sung but that’s soon sorted and is definitely the ballsy strength in the voice that carries the set. A selection of mainly protest songs from the likes of New Model Army (51st state of America (?)) and the Levellers (“you’re daddy went and died in the Falklands…”), the highlights for me were one acapella number plus a welcome outing for Talking Heads “Psycho Killer”.

Next the excellent techno wizardry of Spongebrain, the main man of the project assisted on the keyboards for tonight (in a minimalist way!) by someone looking remarkably like Justin from Skinflick, the pair of them resembling a budget Chemical Brothers or Orbital. A lot of the complex, trippy break beats and vibes is sourced from the assorted technology on stage, but some excellent drum and bass-style slides and tones are played on a strange 10 string device when appropriate. There’s good use of samples, particularly the “are we ever in Hicksville”. My favourite element of the mix is the thumping and pulsing bass tones that really cut through, and provide some sense of recognisable rhythm, as there is a great deal of diverse moods in the set that sometimes means it drifts of into a bit more experimental ambience. This reflects upon the crowd’s focus of attention, when the beats are there people are tuned in, when not it becomes background music for people’s conversations, it would be interesting to see how it went down in a “proper” club.

Enter the guitar mayhem of Duncan Black, a clanking industrial piece providing a false start to the set due to the absence of his backing track, I believe it’s known as machinery complications or tool worries, something like that. Anyway, once resolved he resumes his short and sweet blasts of a whole variety of styles in his compositions, though predominately heavy and that’s fine by me. There seems to be an increase in pounding repetitive beats driving his riff fury along, but deliberate quirkiness at other times. I maybe have the advantage of knowing some of his musical tastes but it’s impossible to hear a weird merry-go-round style tune without thinking of Mr Bungle, and the various guises of Mike Patton are obviously a big influence on this experimentation. He has included some warped, distorted vocals into the mix, though this is only when not playing, combining into the delayed, looped sound sections achieved through intricate pedal combinations that are the most impressive to me. Had a feeling that some songs seem to wind up too quickly, perhaps there’s little merit to much repetition of the song structures without other instruments or vocals to provide variety or colour but some of the pieces would make excellent songs in their own right, seem a little wasted as just guitar demonstrations. Maybe his use of a sample (from Frank Zappa?) of “I could have been a star” hints at his post 30, time running out angst and the thoughts on where these tunes could be going. Maybe it’s just irony, anyway it was entertaining none the less. 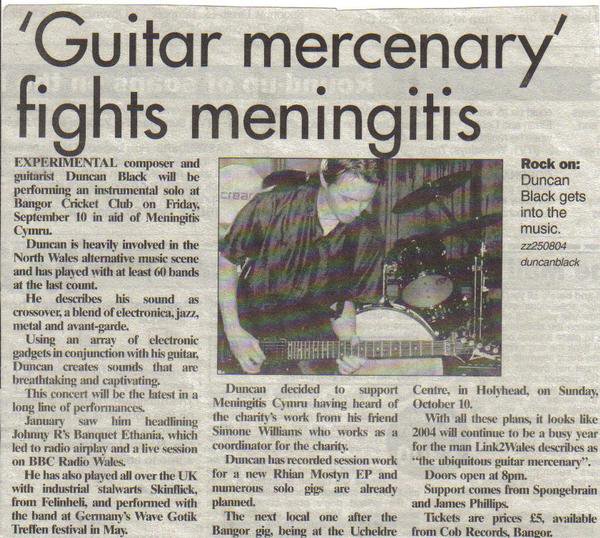