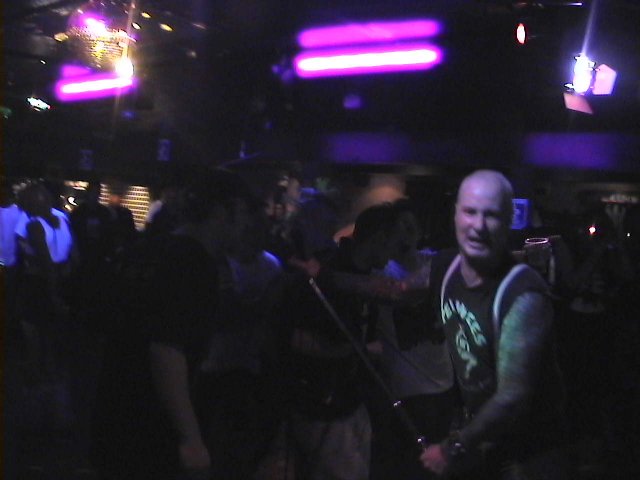 There we were panicking all day about getting to the venue on time cos some idiot, err.. I mean Dave Cox decided to start a 2 day punk festival at 5pm on a Friday. It’s a learning process and you learn from your mistakes. The first band didn’t turn up ’til gone 7.30pm, y’see, these days, in the affluent 21st century, if you’re on the dole, you’re on it through choice & not because you can’t get work, or, more likely cos you’re a lazy bastard. So being in a punk band is not a career, it’s a hobby, and usually an expensive one; thus the need to work. So all these punk bands booked for tonight were probably working, then had to get the gear into the van & drive into North Wales with all the English weekenders, shuffling along the A55. It was inevitable that there’d be drop outs; a disappointing one was Nth Ireland’s Dangerfields who Steve Sync was getting all excited about seeing again & on learning of their absence he proceeded to drown himself in lager & take the rest of us with him. Regardless of what I said were mistakes in the timing of this event, what we had was top quality bands, with a quality sound at a quality venue. 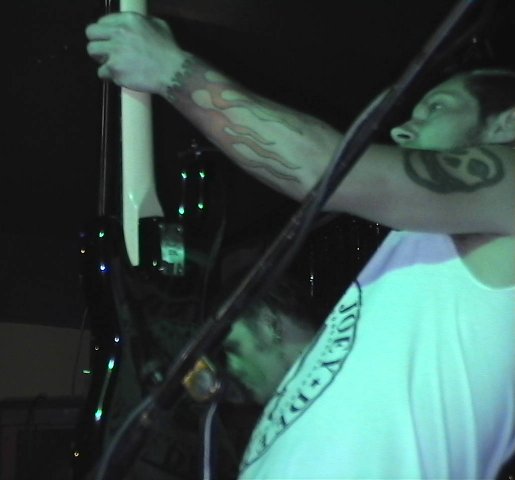 Seeing Stuntface turn up in their 52 berth tour bus brought a smile to my stunted face. They should be re-christened The Wonderful Stuntface for that is what they are which is more than can be said about the way Steve Sync tucks his t-shirt into his jeans. We sat outside in the evening sun before the show and Wayne The Bastard & myself & agreed that the t-shirt should most definitely be outside the jeans; but relentlessly Mr Sync pulled them up over his nipples & went to bully the Kneejerk crew on the next table. So with people milling about soundchecks had to be done quickly & in the presence of everyone. Stuntface even had a coupla punks rucking to theirs & when the band kicked in for real it was intense as fuck, ace as fuck, just fuckin’ ace – what more can I say? Every song is a classic and delivered with ferocity by Wayne Z’addiction, the full cream half pint frontman. Oh shit I’ve just come, they’re playing Commando-a-go-go, then Get A Life – ‘although the wheel is turning, looks like the hamster died…’ – Stuntface are not the best band in North Wales, they’re the best band in the UK. They are ‘the now’, your mum ‘n’ dad should be playing them. A wise move by Dave Cox to put them on early (well, first actually). Do you get the impression that I like Stuntface? Life is loud. 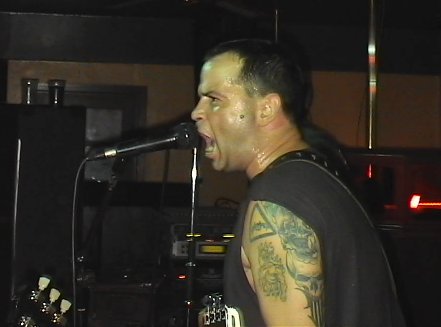 Steve Sync suggested that I grow some runner beans at Crud Acres cos they look very neat, then the conversation switched to Horlicks for some reason, nothing to do with the beer as it was very good bar one warm pint. Wayne was convinced that Sick 56‘s guitarist was the token gay punk for the evening with his (their words) half mast trousers, tight butt & a walk that warranted wearing a tu-tu. I think the band’s vocalist answered them with, ‘We’re Sick 56 & we’re gonna take no shit.’ And it was fast ‘n’ furious from then on in. Very angry with a great sound. Very loud, in yer face, in yer ears & guranteed to hurt you tomorrow. I immediately recognised their ‘hit’ Recipe For Disaster which got the bystanders dancing & like the band before them Sick 56 boasted a full on no holds barred vocalist/guitarist. The faster stuff is better than the plod-a-long tunes & I was sorry to have missed the final track having been summoned to the bar downstairs (cooler beer).

Howard’s Alias were already on by the time I had clambered back upstairs with relevant beers, bypassing the cabaret singer in the downstairs bar who was getting loads of shit off some pissed up scouser, Sync had also mentioned that there was a separate party in full swing on the balcony where the Stuntface crew were sharing a large bottle of Captain B Morgan’s Rum. These souls missed Howard’s Alias, but the venue was full enough anyway. This isn’t ska, isn’t punk, what the fuck are they? They come highly recommended and from Southampton (ironically where Andy Fatman was on his way to tonight). These were ace, they brought the crowd to life & I recalled the Kneejerk greengrocer raving over his bananas about this band last week. He was right & they tickled our entrails with a very bizarre set up, almost like 2 separate bands; as Wayne The Bastard pointed out – a bass like Fugazi, trumpet like The Specials & Dinosaur Jnr vocals, but it works, and works very well to spectacular proportions. Where have they been all my life? I sit thru rucks of CD demos hoping for the next big thing & here they are in my fuckin’ face!

Instant Agony inspired a couple of 17 year old girls to get up and strut their stuff, there’s hope for punk rock yet as many more soon followed suit. Hocky and the boys are here for the fun rather than the politics, but if one person does get it then their well rehearsed purpose has been fulfilled. If you’re 40 years old and still plying this trade, and doing it very well, then it is for fun (I’m doing for the kids man). And if this is frontman Hocky’s full time job then may he never be made redundant. Think Of England, No Sign of Life take me back to my teenage days when I used to get my punk rock by mail-order, & I’d proudly play my Instant Agony singles before making my way to school. 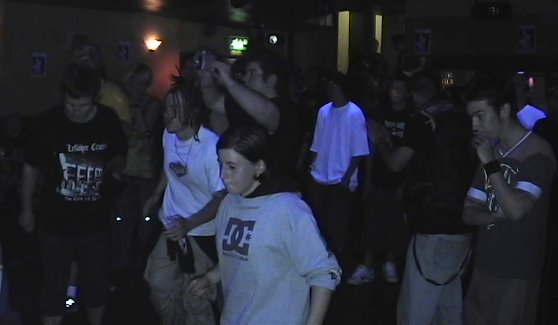 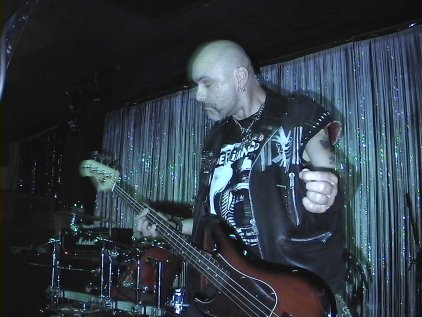 Drongos For Europe brought us their Brummy punk & it was getting louder in this place as Leigh Cox shifted the PA into overdrive. It was relentless and our ears started to bleed, we desperately looked for the St John’s Ambulance man but only Milton was willing to offer mouth-to-mouth (we politely declined). The Drongos (or is it Drongoes) gave some more of the old school punkerockerama; uncompromising to the core & like every band, spot on, professional and very very good. Unfortunately the £1.90 a pint from 7pm onwards had taken its toll and surprisingly The Dead Pets got what turned out to be the graveyard shift with only half the crowd remaining. The Crud Crew, being total light-weights and only able to stand 12 pints intake of lager each, plus losing 2 pints of blood slowly dwindled into the night. Sync was first to drop and he staggered home. Wayne then played chicken with a train guard and I went to play frisbee with a Gino’s pizza. Thumbs up to Dave Cox & the other twats for putting such a big event on; hope the Saturday was as successful, sorry I didn’t get there; Crudstock ran on longer than anticipated. Lets hope this is a annual event – maybe a one dayer at the Morvill (great venue) 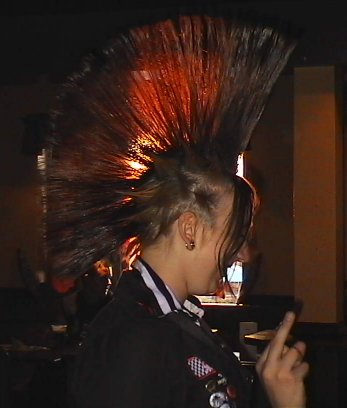