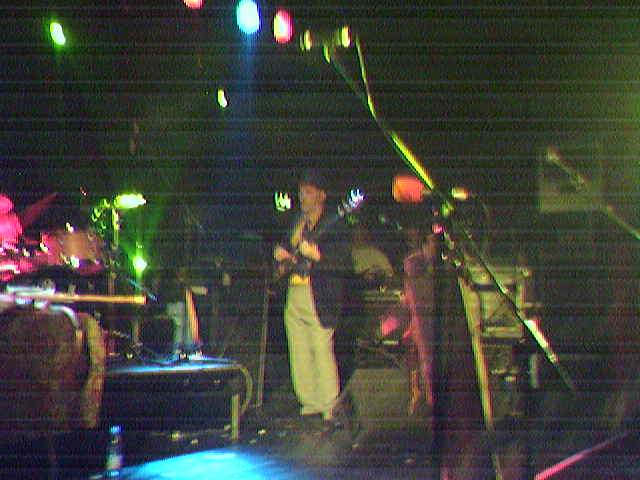 Jah Wobble takes to the stage of the Academy, the second date of a rambling tour over the next few months. Sadly the crowd could only be described as sparse, I reckon there were only 80 of us! – maybe its down to the fact that this could be a contender for the most poorly advertised gig comp, or did everyone else go to the Jamie Reid exhibition at the Masque?. Either way Wobble deserves better; just remember his history – apparently he attacked Sid Vicious with an axe!, the rubbery bass that drove PIL, the endless list of musical collaborators (Sinead O’Connor, Laswell, Can, The Edge etc).

The other thing is that even Wobble himself seems confused, the album ‘English Roots Music’ accompanying this tour is Wobble with The Invaders of the Heart, yet the flyers state the band are the English Roots Band?

Initially Wooble and his drummer are alone on stage and treat us to a drum and bass session, with Wobble reclining in his seat. The remainder of the group join them for the second number, sadly no-one communicates with the crowd, so no song titles here. Wobble steers his group along with a driving bass which is countered by the magnificent drumming of Chris Cookson. The third number is of epic proportions, coming in at a total of 25 minutes, however it fails because the vocals provided by Liz are frankly just flat. We then get a version of the 1991 hit ‘Visions Of You’, the one with O’Connor, sadly Liz’s vocals let the whole thing down, the band played a slowed version that was barely a shadow of the original.

At this point the music seemed to take on its ‘English Roots’ direction, with the vocals becoming folky, accompanied by the multi instrumentalist Jean-Pierre Rasle. Rasle plays a bewildering array of obscure and odd looking bagpipe type instruments, not to mention on wind instrument that resembles an inverted walking stick.

I was left confused, we had the solid heavy bass generally accompanying dub/reggae, mixed with folk music. Now I’m all for experimenting, but I don’t reckon this really works, the two styles just don’t sit comfortably together.

A couple more numbers were played, Wobble complained of the ‘curfew’ and that was it. They returned for the obligatory encore, with Wobble firmly seated throughout, we were treated to some fine clarinet playing from a member of the supporting Mighty Zulu Nation and then he was gone.

Wobble is a fine bass player, who is regularly sought out to play on other peoples works, credit to the guy who forged his own path in ‘world’ music long before it became hip. Maybe now everybody else has caught up he has moved on to the English Roots music?, apparently the ‘English’ set is based on the words of poet William Blake being put to music, very commendable I’m sure, However this move just seems to have alienated even his loyal fan base, as demonstrated by the few in attendance; either way Wobble deserves a bigger audience, but will he get it? – on tonight’s performance I would guess not.