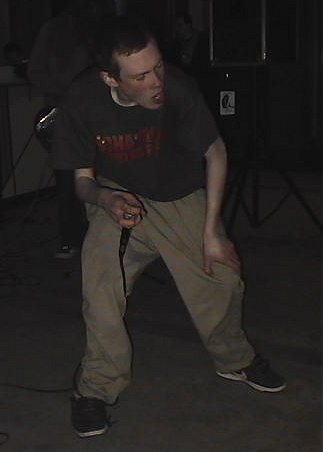 Flyers are back in a big way, they’re everywhere! I think the advent of the computer & internet age kinda stopped the flyer brigade for a while, but the vengeance has begun. Every table & bar at every gig is plastered with flyers advertising whats on next week at Bar Blu, when Beki Bondage is at the Iron Door in Birkenhead, how much Crave will rock you, etc etc. And its great to see.

The snow storms that wreaked havoc over every inch of the country apart from the North Wales coast ensured that Sheffield’s Regicidal were not going to be sledging over the Snake Pass to play in Rhyl on a Wednesday night. You can hardly blame them & apparently they did set out on a quest to get over here but the Huskies cried wolf & scampered back the the kennels.

This left the boys down the coast to keep us warm on this bitterly cold evening. Enter Six Year Hangover, I think this is the 5th time I’ve seen them & they’re still finding their way through an emo-punk – Ramones style. With a new & very timid singer as an addition to the line up rather than a replacement he now needs to put a good number of gigs to bed & build confidence to face his audience. Maybe watching a few Clash videos would help as I think that’s what Rhys Mwyn (ex-Anhrefn) would do to young bands he’d take under his wing; give ’em a Clash live video to study & say ‘this is how I want you to be on stage.’

Bands tuning up at full volume for 20 minutes whether they had a soundcheck or not is not what a ‘flu ridden head full of Lemsip & Guinness was asking for; it’s so unprofessional & very annoying (the tuning bit, not the paracetamol-alcohol concoction). So why do young bands do it, you don’t need to, you only piss people off; we know you’re in a band, save it for the show.
And show is what it was, just like last time I saw them (no review) Gape do not hide behind their instruments. Llanfairfechan’s finest (& probably only) hardcore thrashed out punk band promise to deliver & they delivered enough to put any midwife to shame. A guitar amp pushed to the absolute hilt, so loud it kept cutting out in protest at being so blatantly abused by this teenage upstart. And a front man with so much energy like a spastic on speed with a ferret down his pants, this guy could give lessons to any other vocalist in the business. In fact, chuck those Clash videos away & come and watch Gape. Musically it was to the extreme, like The Electro Hippies on a bad day but that didn’t matter & I don’t think they really cared, Gape were not here to please their mums & dads who stood in the audience. Fuck off mum, fuck off dad.