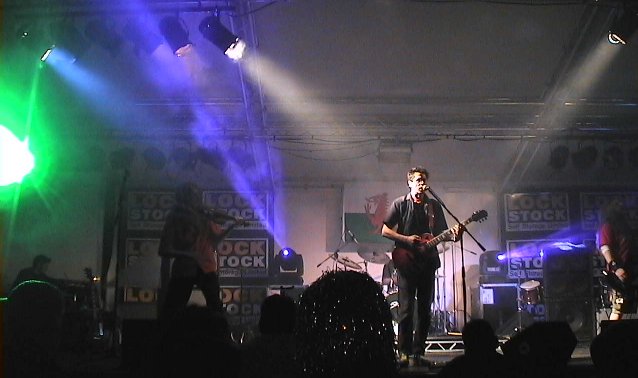 It’s not about the music, it’s all about the vibe, which is a godsend really cos I drank so much ludicrously cheap Carling that there’s huge chunks of this festival missing from memory. Where were the Giro Gypsies, Y Moniars, Amy Wadge? Yes they were there, yes they played, no, I don’t recall any of it! – Must’ve been an ace festival & I did the right thing in losing my mind, cos that’s what its all about. I think. 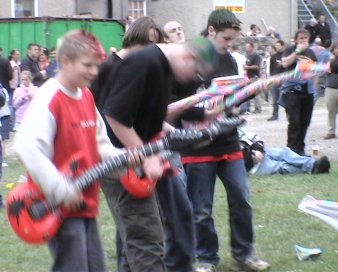 Last years financial sabbatical gave the organisers chance to breathe, regroup, lick there wounds & sew their pockets & give it another go. Just a one-day event this time & I got the feeling that they only got the go-ahead or decided to do it in a very short space of time. Not that there was any slacking on the organised side; a great stage, excellent sound, superb stalls, friendly atmosphere & Carling at £2 a pint! What more could you ask for! Not even a spot of rain to dampen the proceedings.

Fatman was busy baking bread for single mums ‘til dinner time, & with Mrs Fatman providing transport, it meant we missed the early bands; notably Hooper, playing their final gig in that form, & I really wanted to chill out on the grass to their Gomezque sounds. It turned out that they ploughed through their set with no time to chill & their next carnation will be more acoustically driven.

Corky’s Cat sort of set the tone for most of the day, where the bulk of the bands played cover versions, so you could say Pigstock is a cabaret festival & yes, the bands who play original material find their stuff lost on a crowd simply here for the buzz rather than the music. It’s a local festival for local people, where 99% of those present still think the Rolling Stones are ‘in’. So a new band playing their own stuff (unless they’re exceptional) is not going to cut it here. Although I do remember a certain Pocket Venus winning the Denbigh masses over for 2 years running for varying reasons! (See previous Pigstock reviews). Having said that, Corky’s Cat touched my heart with Dirty Old Town, which always brings a tear to my eye. 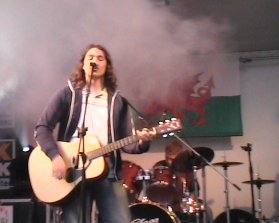 The breaking news is that half of Gintis had a fight last night, which is probably a bit better than doing it onstage (its high time there was a Pigstock DVD, to include ‘that’ Pocket Venus fight). The Gintis boys were having a BBQ in Dave’s garden & Carl decided to remove his jeans & underpants & chase Kyle. There was a muffled scream as Kyle gasped for air when Carl sat on his face. Punches were exchanged, next door threw the undies back over, Carl threw his pint over Kyle, Dave played hell screaming at how immature they were, Carl screamed ‘fuck off’ & Dave said he wasn’t playing today unless he got an apology. They did play, I have the photos to prove it, but no memory of it! I recall them tuning up (eh? Gintis. Tuning up! Shurley shome mishtake), but that’s the extent of my memory apart from Carl’s bird fuelled by extra strong cider trying to get Fatman to give her a shoulder ride & then Carl getting a bollocking off Huw Spew (organiser) for swearing at a family orientated festival. (Anarchy). 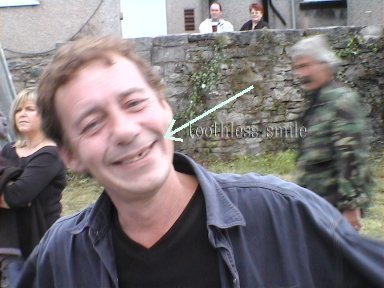 Before all this & before the Carling took over the red blood cells & invaded my veins I was accosted by an angered Martin Trehearn (pictured) who gave me a gummy grin & the middle finger. Me & Martin go back a long way to the days when I frequented the Bistro as a snotty punk, to playing the Bistro as a spitting punk, to DJ-ing at the Bistro as a spinning punk. He had the misfortune of my elbow connecting with the bottom of his pint glass while he was taking a drink; this happened 3 years ago & the consequences were 2 years of pain & now a front tooth missing. So if anyone wants to get a t-shirt made up with, Neil Crud Knocked My Tooth Out on it, I’ll pass it onto him. Sorry Martin. 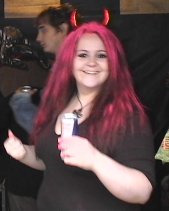 Sarah Davies (left) was always going to benefit from having a backing band & she’s half way there with a bassist & 2 percussionists (I think) & gave us that opportunity to chill out. I did notice the ubiquitous Chris Godfrey up there tapping on the bongos & I’m certain Sarah had black hair on stage cos I’ve got a picture later & she’s got a red mane & devil’s horns! Damn, that Carling is good stuff!

Much lauded, hotly tipped Mooi (pronounced ‘moy’) were lost on the Denbigh crowd, this acoustically driven female duo were just too damn mellow for this kind of event. They may also have been too quiet and more suited to Wrexham’s fine Central Station venue, where they played earlier in the week. 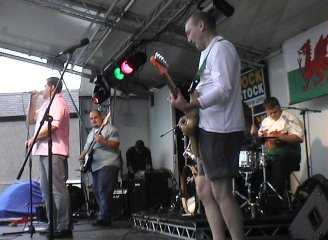 You see this is the point where it all starts getting a little fuzzy, Carling Carling Carling Carling Carling Carling and another pint of Carling was all on top of 4 toasted tea cakes, which is not the menial amount of food you should eat to supplement what is to be a Carling binge, so Straitjacket (above left) make their annual appearance which I know is harmless fun & very entertaining, I recall Teenage Kicks (the 2nd band to play it) as Mid Life Crisis (right) had done it earlier amongst Who covers & I recall frontman Colin Broster’s smart looking top, but my head was in a Carling spin by now as I had lost Fatman & instead worked my way through the crowd, annoying old school mates.

So what exactly did happen to the Giro Gypsies & Amy Wadge? They did play, at least I think I spoke to Stu Gypsy backstage at some point. So where was I? What planet was I on? Fatman did later tell me that we were stood at the back & he and Dave Gintis were split up by security & a copper after Dave took offence to Andy spilling a pint over him (is there a pattern forming here? Dave Gintis involved in more trouble?) (see fight pic below). Then Fatman lost me to the extent of my name being called out over the tannoy (so he says) – ‘Can Neil Crud come to the lost childrens tent please.’ 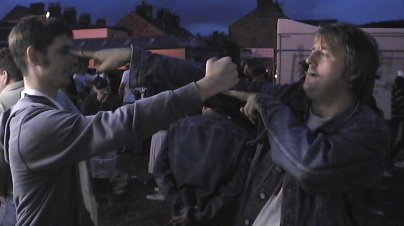 We did catch the Bleeding Hearts who gave a great performance (great bassist), which really looked & felt the part as night time drew in & the fire eaters did their roof top stint to a firework backdrop. They were like The Levellers, only good. Don’t even know if we made it as far as The Goodfellas, by now Paul Scouse had come to collect us, got pissed off with waiting & then came back after a long plea.

Great day out as we peaked at the right time. Hopefully you should read a review next year.