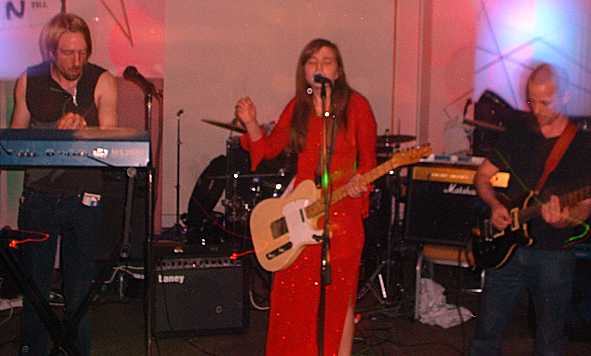 It was a lovely afternoon & I was sick of typing in updates for this website so I dusted down the golf clubs & headed out for a quick 9-holes; something I’ve not done since being publicly slain by the Blind Lesbian Dwarf website. It was the combination that lured me to the lush green grass; Golf & Gintis, such a perfect day.
I shaved off 5 days of beard growth, checked my smooth complexion in the crud mirror (it always lies) & headed out.
Five hours later I would be marvelling at the wonder that is The Hollow (pic below left), Holyhead’s finest & could well North Wales’ finest for they get better every time. This isn’t indie, it’s not punk, it’s not rock; it’s there somewhere between. If these genres were pigeons, then The Hollow are a feisty cat that’s thrown itself among them. Extremely well planned song structures are complimented by no less than 3 guitarists to produce a sound well beyond their years. After an opener of vitriolic proportions it is still that song Prove It that does it everytime. The Fatman nodded with an ‘Oh yes’ & soon as he heard it & Steve Sync asked what cover version was it; it of course isn’t a cover, its just so good that he remembers it from last time; but don’t take my word for it, check it out on my radio show (playlist #8). The cover version was left to a Radiohead song off OK Computer. Radiohead are now the dinosaurs of British music, so you’d get the same lack of cred covering a Genesis song! OK rant over, nonetheless The Hollow version was very good. With a switch to keyboards at the end Tom Parry spazzes out behind the ivories enough to make Sync request they play at his forthcoming funeral. 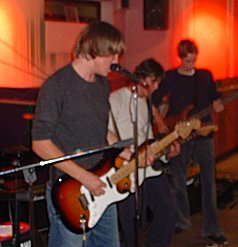 Feeling a little nervous about turning out in front of my golfing peers (Ronnie Corbett, Bob Hope & Bill Clinton) for the 1st time in 18 months I decided to rattle off the rust with 120 balls at the driving range beforehand. I never did get the hang of a full swing & made that mistake as I topped the 1st 10 or so strikes. Self discipline brought me back down to my old quarter swing that strikes through the ball, sending it on a very straight 125yds with a 7 Iron. With this boost of confidence I ventured out toward the 1st tee.
With the autumn sun beating down I took off my jacket & the Kentucky AFC badge caught my eye, they also caught my ear when I heard their new single Outlaw being played between bands at Blu, you wanna check out an ace interview with them on the Radio One Sessions in Wales website. You see KAFC come from the cool part of North Wales, a place were the South accept as being OK, had they emerged from Rhyl (Scally Land) they’d not stand a hope in hell of getting exposure from down there.

Coming from a scally part of North Wales but forming in London are Science (pic top of page), who are playing their 1st gig in God’s country. Homecoming queen Rebecca Dien-Johns looked quite spectacular in a Morticia style red dress with slits up both sides. Add a guitar prowess to this form & Sync was contemplating changing his name to Gomez so he could kiss Rebecca up her arm. Long gone are the days when she’d watch 4Q & Blacklisted at the Grand in Penmaenmawr as a 14 year old; she probably didn’t but sounds romantic anyway! A strong keyboard prescence with cool backing vocals did at times smack of a husband & wife duo where the rest of the band just made up the numbers & Science did find their quieter ballady numbers lost on a crowd intent on talking over them. But like myself after the 5th hole, where the continual 4 or 5 over par scores I was hitting was merely a warm up to the home run, Science too got out the biggest driver in the bag & slammed the ball home. The crowd got a little excited too when someone set fire to a chair, which is customary as it was some stage bunting alight last week. A surging sound pumped from behind (oo-er) by an excellent looking semi-acoustic bass guitar thumped by a shorn of blond locks Stu Maxwell played its part as Matt followed in The Hollow’s footsteps & went beserk on his Korg. This left Rebecca to PJ Harvey (a well know adjective, look it up!) the moment with her guitar & hammer the living daylights out of it at the end of Sonic Boom (hear it on my show #10). My biggest complaint is that the Sonic Boom outro should be a lot lot longer as it really kicks in just as it ends! It did however leave the crowd roaring for more, which is unheard of round these parts. Science didn’t oblige, good on ‘em.

Feeling pretty good with myself I walked up the 9th fairway having drove a perfectly straight ball just infront of the green, I noticed some weird looking mushrooms poking out of the ground & feeling pretty peckish I munched away on them, I found some more & wolfed them down as well. I chipped onto the green within a footstep from the hole & parred it, my 1st of the day. Feeling chuffed with myself I skipped back to the car, whacked on ‘Physical Graffiti’ by Led Zeppelin & cruised home to contemplate watching Gintis (pic below) later on.

As the mushrooms kicked in Gintis pissed about endlessly before starting their set, totally unprofessional yes, but I reckon if they do make it (& they’re adamant they will) then they should carry on doing this just to piss everyone off. Dischordant & out of tune to the point of pain for the 1st couple of numbers I did envisage one of those Bar Blu nights where the last band trash everything cos they’re so wasted. It doesn’t take a scientist to work out that if you pay a band in beer tokens they’re going to drink, & the last band on are going to be pretty tanked up by the time they stumble on stage. It did dawn on me by the 3rd song, that truly wonderful masterpiece, Philosophical Transactions of a Disappointed Physicist (radio #10) that these guys must’ve also done a round of golf this afternoon & had a bash at the same mushrooms as I did! Some of these songs, or at least the way they were playing them are straight out of the magic mushroom teapot that was brewing on the 9th hole. All Gintis need is a psychedelic projection & they’ve cracked it! In fact a projection of car crashes or tampon adverts (or both) would just take that bizarre to the extreme. In brutal honesty, the band probably let themselves down tonight with a messy disjointed set, surmised by the statement Carl Gintis said at the end;
’thanks very much, you’ve been great, we were better.’
There was an element of past tense truth in that, Gintis have been better, but when your front man is the Jim Morrisons [sic] of the new wave of post rock you know they’re going places; pity he works in Asda.
Now pass me the bong please. 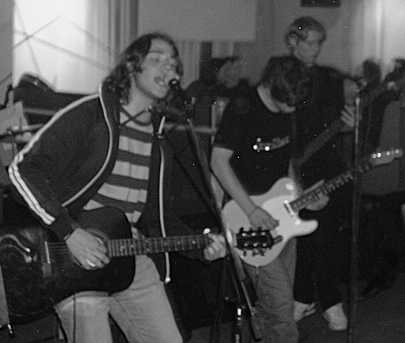