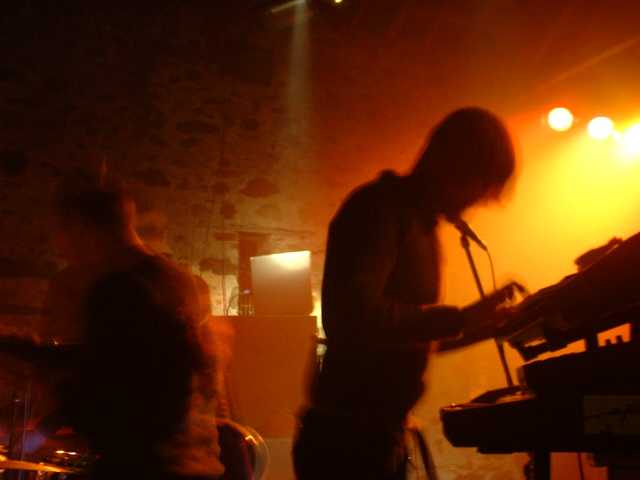 (Sync) We were in doubt whether this gig was on, as the Crud mobile pulled into the empty car park. The three bands on offer tonight were a package unmissable for us, but as we looked around the venue, it became clear that we, and about 30 others (this includes bands and bar staff) were the only people to make the journey through bad weather tonight. There were stories of minibuses breaking down on route to this gig, but I couldn’t believe the low turnout, considering the quality of tonight’s bands. The venue looks and sounds better and better every time I come here. The venue now has a stage, and the sound quality tonight was first class, and a big improvement on a couple of previous gigs I’ve witnessed here. There’s something very special about watching bands in Hendre Hall, especially tonight, with the large open fire, flaming and hypnotising images over the stonewalls of this old Victorian barn (what was I drinking?).

(Crud) It was one of those defining moments in my musical life, like another milestone, & there have been a few. You could say it all started when I uttered my first words as a baby; ‘Hey Jude’. It was the only thing that would get me to sleep so my parents would leave the arm off the record player (that’s like putting a CD player on Repeat to you kids) so the Beatles single would play again & again. The next I suppose was meeting The Clash as a 13 year old, then experiencing the Anti-Nowhere League a year later, then hearing Bauhaus’ ‘Burning From The Inside’ LP for the 1st time while on mushrooms! And so & so on.

Tonight was another of those moments; the 1st time I saw Jarcrew. All will be explained later. 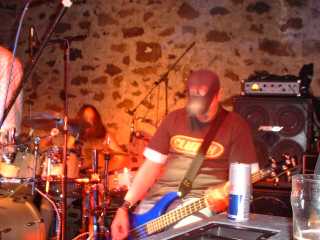 (MWJ) Suns Of Thunder – I made a late arrival but could tell they were in action as I approached through the rumbling bottom end vibes, almost definitive stoner metal, perhaps generic but excellently done. Plenty of building up and pounding down. Sparse vocals and epic rock-outs like the masters Kyuss.

(Crud) Their single on Remote Control does not tell you the whole story, I was expecting a trip back to the heavy rock section in school discos, where the kids with Rush embroidered on their denim jackets would take to the dance floor & headbang to Saxon’s Wheels Of Steel Rainbow’s I Surrender. The Suns opened with a heavy metal stormer that concluded with a splendid long outro similar to my mate Hendrix. Excellent stuff. This Complete Control Music night (the 1st of many we hope) had all the elements against it as the 80mph winds outside ensured the Bangor free bus broke down.

(Sync) The Suns’ 4th song casually opened my flies & masturbated me gently throughout before zipping me back up & leaving in a taxi.

(Crud) There is a craft to this band; its not all heads down, goat fucking, tie your daughter down stuff as the fashion victim frontman’s ridiculously long hair & ludicrous baseball cap would suggest. There are some great build up jams with plenty of atmosphere, great use of the massive drum sound. Add this to the open roaring fire (choke), rain splattering on the high slate roof, all we were lacking was Satan himself to order a pint of Boddingtons at the bar. Long instrumentals, but not of the guitar wanking type, this band are going places with extremely well constructed stuff & an aural pleasure… whoops, I’ve just come. 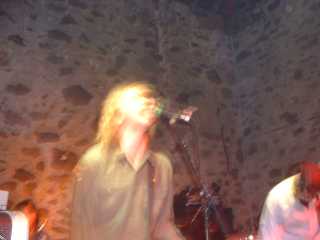 (MWJ) Kentucky AFC – First time I’d seen these and found their take on raucous, bluesy hyper-rock’n’roll something fresh for these parts. Three-piece achieved a lot of subtle complexities and variety within this familiar genre, confident stage presence and vocals too. Reminded me most of John Spencer Blues Explosion, cool. 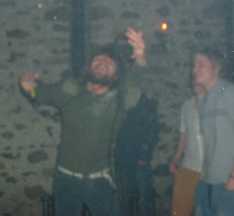 (MWJ) Jarcrew – Jeez, Jarcrew. Again, one of those deeply pleasing occasions where you can say you’ve seen or heard nothing like it, that reminds you why music and gig going can give you such a buzz. Sporting a nice matching line in army surplus jumpers they still seemed very young for a band that has already built a good reputation, fair play to ‘em. The music is berserk really, in an angular punky rock style, the only vague reference I could think of was At the Drive-in. But there is plenty in unique combination within them, the main vocalist freaking out, backing and banter from an agitated drummer, bass beaten shit out of . Interesting use of keyboards and effects to give warped out sections, also adding to sweeping aching melodic sections, like something off Sonic Youth’s “Goo”. Other classic moments include guitarist screaming vocals through his pick-ups, drummer diving over his kit at the end, other people chipping in on added drums, and a general sonic melee at the end. Great stuff, shame so few there to see it but band seemed to enjoy it anyway.

(Crud) The spastic disco singer is definitely disturbed, I bet he doesn’t get many people badgering him after shows, they’d be too scared to approach him! Though I’d be disturbed with a haircut & beard like that! There’s no fucking around with Jarcrew, ‘unique’ is their middle name with a cool excellent delivery.

(Sync) This is one of those gigs where you can boast that ‘I was there’, although in 5 years’ time there’ll be 200 people saying the same thing.

(Crud) Kelson’s spastic poses with a tambourine stuffed down the breach of his pants, fitting like an epileptic on fly agaric mushrooms from keyboards to mic stand to crowd & backed by a wonderful wall of sonic bliss ensures that I am one of the honoured few to witness what went before us tonight. One of the gigs of the year for sure for the sheer quality of all 3 bands.

And you missed it. Losers