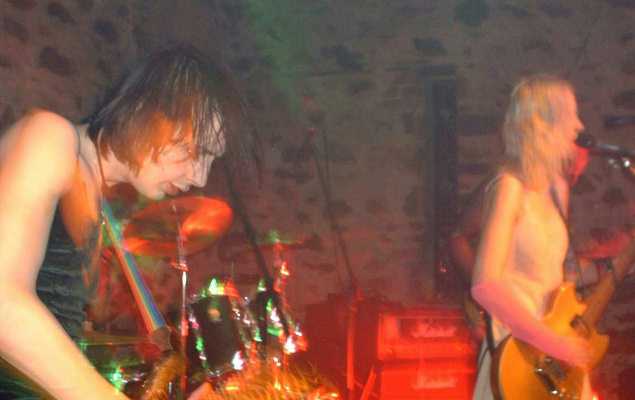 (review & pix by Neil Crud, with a little help from Wayne The Bastard)

Two days on after tonight’s gig & I’m sat here with Guinness poisoning as the black stuff courses through my veins, we did one of those cultural trips to Dublin; y’know, the type where you go to another country to sample the local traditions. It also gave us time to discuss the bands we saw at Hendre Hall.
The Wendykurk way seems to attract bands, too many for the bill again, which detracts from themselves a little. Tonight’s gatecrashers were Logic of Impossibility (below) a Felinheli band who gave us the full range from slap-funk-bass to punkadelia in a Senser meets Back To The Planet stylee. They are that obligatory hidden track you get at the end of every CD, only at the start of the show.

Seven of us had 6 hours in the Emerald Isle to get in as many rounds as possible on top of the cooked (very expensive) breakfast on the Fast Cat crossing. Over this breakfast & the anticipation of consuming alcohol before 10am we talked about Carbon Vein (below), who struck me as an MTV2 band but with some excellent double guitar fx, half of which were provided by the ubiquitous mercenary Duncan Black who played also for Logic and plys his trade in about 10 other local bands. 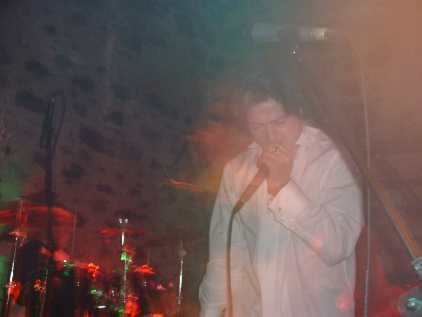 We were in disagreement over Kipperwig (below), (great name if you’re into fish), Steve said the singer of this 3-piece was dressed like Don Johnson in an Alexie Sayle ill-fitting suit, I thought the songs were a little too rocky for me but Wayne suggested they are on the verge of writing sweeping anthems like the Manics but are not quite there yet. Steve did quip they were like a fig roll, they sound interesting but taste awful (Wayne on the otherhand really likes fig rolls & had earlier introduced us to a new herb in his garden – Fennel). We did all agree that the 10 year old drummer was superb, a revelation in fact. 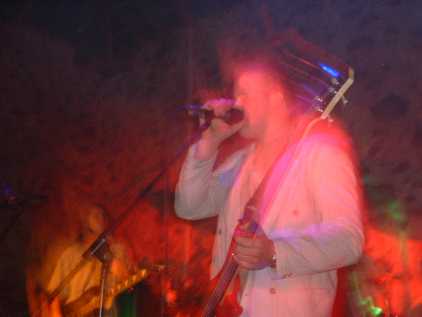 With Dublin looming close the following morning we made the mistake of arriving before most of the bands. This gave us time to advise Steve on the songs he should perform in his forthcoming 80’s tribute band; ‘Alternative Eighties’. Fatman has already been signed up to play

Matt from Wendykurk was finally paired off with Steve Sync (see previous review) & they make a lovely couple. After a false start where Nomi broke a string & went for a piss, this Holyhead 4 piece went for it. most people were here to see Wendykurk, (great name if your girlfriends called Wendy and you like Theatre Of Hate & Spear Of Destiny, anyway I digress; looking like the children of Marilyn Manson and Placebo, they managed to assualt our ears with some quality tunes. Again though they were their own victims by playing close to midnight on a weekday there was a small exodus as people made their way home. I decided to check out the band from close quarters & dodged the flying dreadlocks and observed from the stage side, I wasn’t disappointed, more like overawed by the power of Wendykurk. Preparing to release a mini-LP on Ankst Records complete with a raw meat lampshade on the sleeve, this band are not here to please you, they’re here to fuck you dry whether you want it or not. There is no mercy & with songs like ‘Cunt’ you know there is no compromise. They are a band who can provoke opposite reactions from the same audience, some people love them others loathe them, some leave disappointed, others overwhelmed. We too had to leave before the end with having a date the following morning with a hydrofoil and a lot of beer.

Hendre Hall remains a great venue, the crowds just seem to be small when we’re there.