(review and pics by MWJ)

Driving up, listening to the radio on events unfolding. Reports on demo in Manchester, will it stop me getting to the gig, should I be bothered? Bloodthirsty media questioning why bother protesting now the wheels are rolling? Errr…For the same reason that they did against the Vietnam war, shall we wait till it drags on for months/years, it’s wrong, do not accept it, now. Get to venue unhindered, time to spare, “Tactical Aid Unit” filth-mobiles flying past, wander up towards centre. All mod cons cops milling about, plus the traditional horsey types. Couple of old dears standing by, watching, comment “I feel sorry for them (police), some of them won’t like the war either”. Couples with young children in tow, hurrying along, not away from, but towards banners and noise. In front of a big sweeping line of dibble bikes and hosses, the march is moving on apace, people piling in from every direction. Join the flow, and so does the adrenaline. The whistles, megaphones, chants, cheers at the horns of approval and peace signs from countless blocked but good-natured motorists. Tears well in my eyes, cos I’m soft and actually care about skiploads of dead Iraqi kids, picture war happening here, maybe it’s only then people will snap out of their apathy and we’ll all be anti-war until its worn off again in another 50 years, or maybe tears of joy that there are still thousands of people who give a fuck. To the beat of samba we bundle along, slowing at some junctions, speeding up to make the (red) lights at others. Numbers difficult to guess, measured by the street full. Pocket of abuse at the Lord Nelson pub (England expects…), many times their number pause to debate. Pass electronic sign reading “System Fault”, too right. Must have covered miles in minutes, off up to around the inner ring road. I leave to one side, convinced to join again when opportunity next arises.

Back at the MDH the gig has actually started early so it’s straight in to the spectacle of Zimmer’s Hole. Bigger hall than previous Strapping Young Lad show at Hop and Grape upstairs but still packed out. The tour is titled Keeping it in the Family as musicians are interchanging between the three bands, here it’s the guitar and bass from Strapping with a front man and a half. Done up like the Devil, red, horns, blacksmiths apron, sword, as I work my way through he’s promoting the benefits of demon piss and spraying some from a huge rubber(I hope) strap-on he’s pulled from under his garb. People are licking it up. Catch up with some mates from Preston, “what the f**k is goin on………”. The theatrics suit the music, because they incorporate just about every sub-genre cliché of metal imaginable, all done with knowing over-the-topness that has this crowd (that would probably like these things even if they were serious) in “metAAAAAAAlllllllllllllllllll” hysterics. It’s like post-modern metal, self-deprecating at the same time as glorifying in formulas. Songs such as “A Thousand miles of Cock” and “The Death of the Resurrection of the Death of Metal” sum it up, but the delivery is very good as well, carrying it off all the better. Seek to confirm the fact that “We’re Canadian. We’re not American. We don’t make stupid mistakes.” Wry smile from most here.

Interlude at the bar meets Ian guitarist from Stuntface, also loving every minute, and arranging to come back along N. Wales coast to play soon. 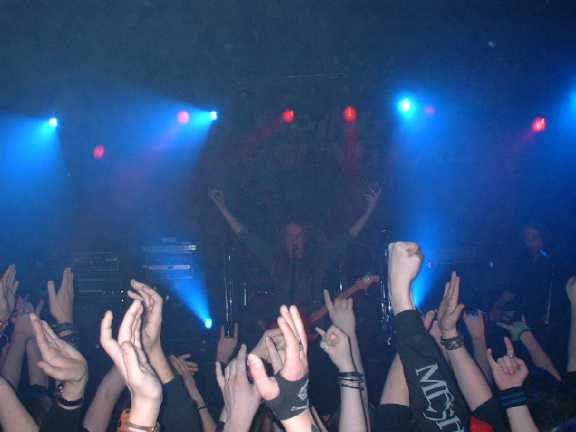 Next up Devin Townsend fronting his own band, who are a more prog-rock mix with atmospheric metal. It has people swaying and nodding appreciatively, occasionally getting over-exited when the tempo picks up (yer spilled me pint). There’s ongoing amusement from the man himself, he has charisma by the bucketload even if he does look wasted a mere third of the way in to their European tour. Some lady shouts “I want your baby” Responds “We have a kidnapper in the building”. “The sports team from my sector is superior to the sports team from your sector”. Although diverse in the amount of feeling they get into the tunes, there’s some connections to Jane’s Addiction or Tool in the soaring melodies contained in tracks like “Ocean Machine”. Finish with insane rock boogie of “Bad Devil”, aided by guest Devil from Zimmers, who tries to mate Devin with his large appendage. “You wanna watch you don’t lose that up my ass, baby”. Again, all disarming in the best possible taste, everyone is enjoying the friendly violent fun. 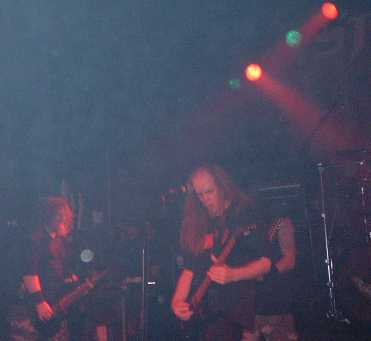 Last but not least, “Do you see bald fat old men, or do you see strapping young lad?”. The final combination of this touring entourage is the least silent, most deadly. From the pounding intro chords into blitzkrieg riffing it’s a display of shock and awe (Enough of the clichés) in speed metal terms that rivals the gods Slayer. Their whole album is inspired by post-September11th world so there’s no real need to speak separately on the issues, lyrics like “Give us a reason for wanting a war”, and “Bring on the young, bring on the dumb, young machines burn for war/pay for war”. It’s driven along in apparently effortless style by the man mountain / fat bastard legend Gene Hoglan on the drums, looking like Cousin It, but bringing teeth grinding/jaw dropping disbelief from me drummer mate for fact he’s throwing in stick spins in 200bpm songs. Some of the riffing could pass for the extremity of black metal but with none of the pretensions, and with much more invention and technical precision. There’s also strong input from new keyboardist (“Maximus!”), adding an industrial/future vibe. They mix up songs from all their album releases and the impact is consistently good. Ending with (“we’re so predictable”) “Detox” that has everyone piling into a frenzied pile, and encoring with “All hail the new flesh” that ekes out any energies remaining, we’re left shell shocked, ears ringing and just stunned at the levels of intensity that this 21st century metal can reach. Far more productive aggression than the economic slaughter in the Middle East. 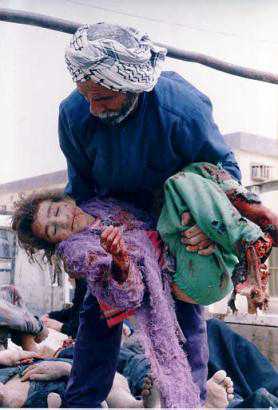