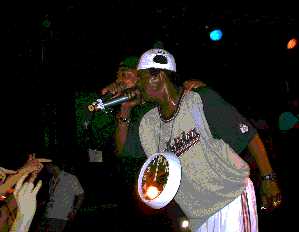 Christ, I was excited about this for weeks, like the run up to Christmas, the opportunity to get up close and personal with legends. Seen them twice before in early 90’s “heyday”, Brixton Academy with Anthrax on the back of the “Bring tha Noize” collaboration, and ’91 (?) Reading festival, where they headlined the Saturday before Nirvana’s “final” show on the Sunday (yes, I was there kids, Mr Cobain and crew were OK, PE were better). Both times some of the best of times, and although I haven’t kept entirely up to date with their numerous releases over all these years, and rap has evolved in many directions in the meantime, I just knew this was still going to be the mu-va-fu-kin BOMB.

Got over just after 8pm doors, thinking it may well be a short Sunday evening session. Approaching, can already hear beats and vibes cutting out into the cool air so dive straight in. DJ Hurricane already on stage, on the 1’s and 2’s in front of a crowd that’s already rammed in and more streaming in all the time. Reassuring that there is still that much respect/affection for the band and it’s from all sorts, races, 14 to 40+. Hurricane is probably best known for his work with the Beastie Boys but tonight it’s pretty laid back roll out of hiphop tunes, not going overboard on his mixing or scratching, leading the crowd in some chant alongs, generally getting people in the mood for more to come. A hooded figure wanders over, shakes hands, leans on the side of the podium. There’s rhythmic nod and bob from this individual to the beats and bass, matched by the crowd, a lot of happy smiles. He wanders to the front, unzips his coat, there’s a huge clock (I said clock), its Flavor Flav, the place goes into uproar. He wanders back to watch the spinning discs for a bit, maybe psyching himself up, maybe addicted to being on stage full stop, then heads off.

Soon, to the main event. Interesting to see there’s a live band set up as well as the decks, what’s in store? With a relatively short sample frenzy intro a cagouled Chuck D starts off with a brooding number, and there’s live instruments playing throughout the set, knocking back any critics of “not real music”. At least I think it’s Chuck D but it’s a bit hard to tell under the hood, kind of Grim Rapper effect. That’s off soon though when it all kicks off with “Welcome to the Terrordome” and the full band gets into full effect. I think it’s a 9 or 10 piece all in but it’s hard to keep track with the constant milling around. This ends very abruptly and quickly as things have got a bit over-excited and all the people who thought they’d be able to keep hold of plastic pints in a bouncing mass of bodies have quickly lost them, plus helpful others have thrown a load at the stage. So they inform us in no uncertain terms that the show won’t be going on with that kind of malarkey, and though “We don’t advocate violence, if you see some one throwing something you better beat them down before we do” which seems fair enough. By the way, the S1W’s seem to have samurai swords available, so no messing. Anyway, blending “…Terrordome” with “Bring the Noise” as an opener ensures everyone’s carried away by the wonderful chaos.

It delivers all hoped for plus more. Through strategic bouncing and bobbing I get right up front, right in the face of it all. They have such a strong back catalogue of awesome tunes like “Shut it Down”, “Black Steel”, “Don’t believe the Hype”, “911’s a joke”, they just keep hitting you. So close in the music is physical, bass for yer face and body as well. There’s newer, just as strong stuff in there as well, though sometimes not as fast paced as the earlier. “Revolverlution” and the oh-so-topical “Son of a Bush” (“son of a bad, bad man”) that enables discussion on bullshit government wars (“Tony Bush, George Blair, just the same”) and the 1000(?) here giving a shout out of peace in unison. Directly followed by a cover of “War (What is it good for?)” dedicated to the recently departed “local” Edwin Starr. There’s a moments silence for the also”late” JamMasterJay, although Professor Griff corrects Chuck that “we don’t say “the late” Jesus Christ, JMJ’s spirit carries on”. Someone nearby comments earnestly “Professor Griff knows”. Too true 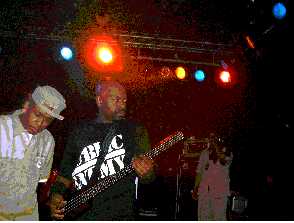 And so it goes on, it is a show and a half. A perfect mix of music and politricks, they have plenty serious to say but they maintain a sense of humour also, rare combination obviously refined through sticking with it all these years. You get the effortless delivery of machine-gun raps, some times you just can’t concentrate on them because there’s so much else going on. You’ve got the banter, the moves, the crowd participation. The S1W’s and Griff, with their quasi-military drill/martial arts sequences in the background (including press-ups!). You have a magic show when Chuck gets a shiny top hat from someone in the crowd and shows the power of his finger in setting of beats. They have soul breaks from the drummer, licks from the geetar. You have a 20 minute Flavor Flav solo spot, dancing (a bit better than Bez), treating us to one minute blasts of one of his numbers before getting the DJ to jump to another, finishing with a new one “How come we don’t hear from Flavor no more?”. We can’t get him to stop. He also points out the positive mix in the crowd; this isn’t just wiggas like me. Then there’s straight into a whole set of rap/rock lead by Professor Griff, as they say showing that it doesn’t matter how wide the influences, it comes together to something good. They throw in “Back in Black”(!?!) and a tremendously charged version of RATM’s “What good is a bomb”. Griff is also amusing in his looks of disbelief at various proceedings, checking his watch at Flav’s incredibly extended “Yeah boyeeeeeeees” DJ Lord (the “retired” Terminator X’s replacement of some 4 years) gives us some turntable action that I can’t even begin to describe. And still this is all just cranking up to a final assault of the full band with numbers like “Can’t Truss It”, “Prophets of Rage”, they just keep coming, DJ Hurricane joining them for a section as well. Getting towards the climax they are coming up front in quick rotation, giving us one-line philosophies to mull over in to the night. Finally a little soul jamming to ease themselves away to deafening appreciation, they show their own enjoyment right back, it’s been about 2 ½ hours of pure entertainment before we eventually shake hands/bang fists. Peace, togetherness and power. Equals fulfilment. Long may they continue. 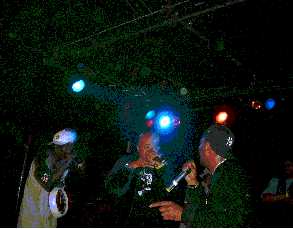