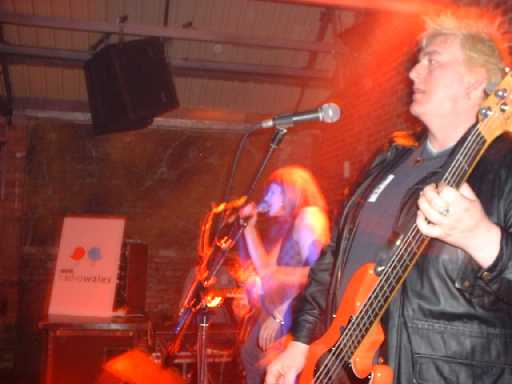 Diverse is the way of the world on this Sunday night with a line up that would never play together had it not been for the hard working Adam Walton & his BBC Radio Wales team. They organised tonight’s show for a live broadcast, so everyone in the large audience was on the guest list. And this being my 1st review of 2003, having come out of a 3 month sabbatical & ready for a heavy 6 weeks of live shows, I was like a little kid with a new toy & really excited about seeing these bands.

Acting as a prop for the heavy drinking Andy Fatman & Steve Sync we took our places for Cream Tangerine. I really felt for them when I rec’d a demo 18 months ago as it had been produced by some non-geezer & I knew they were capable of more having seen them at The Breeding Ground. Taking the term Diverse to the extreme, this Wrexham band were diverse to the point of being a splinter group, yet there is a funk element running through them. The newer stuff is far superior, which is good news for the band, or any band. The Radio Wales live recording presence ensured a very vocal support, perhaps we could get Adam’s Musical Mystery Tour to record every live show in the area, a sort of musical Sky Sports blanket coverage. Imagine the crowd response! And if it was a bit mute they could turn the crowd’s sound up like they do at Wimbledon’s home matches. Occasionally joined by a backing female vocalist Cream Tangerine mixed indie, funk, psychedelia, oregano & feta cheese. The penultimate song was excellent & if I had switched on my radio & stumbled across this song I’d’ve thought it was fucking great! 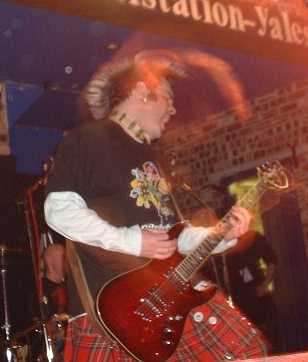 Having seen Stuntface (pic above) in a forgotten pub in a forgotten village late last year with Wayne The Bastard, I was eager to introduce Fatman & Sync to the delights of this full on, no holds barred punk thrash outfit. It was very Heineken to catch ‘em in their full blown (off) glory, blasting salvo after salvo into the big crowd. These are old school punks playing very up to date underground punk as fuck rock. This what we want, this is what we got. Now these guys are not spotty 17 year old spring chickens, in fact they probably sprang a surprise on the chicken & shagged the living daylights out of it! Stir fry anyone? A new LP is due out soon on Good Clean Fun recs & you know it’ll be fast furious & very very tight. Tight is an understatement; put it this way, Steve Sync writes his name on each coin of loose change in his pocket, Stuntface are tighter than that.

When George Dubya Bush came onto TV promising shock & awe, he was of course referring to Stuntface.

Melys (pic top) took old Frank Sinatra literally & definitely do it their way. Having cut themselves off from a corrupt music biz they have followed the example of those anarcho-punks of 20 odd years ago & do what Crass did; became self sufficient. Their own label, their own studio, their own radio show (John Peel ;-), & their own fans (growing all the time). By the 3rd song my spine was tingling as Chinese Whisperings ran down it. On the radio & on CD Melys are very good. Live they are awesome (a term I normally reserve for bands with 12 guitarists). Being a Melys virgin I didn’t really know what to expect; an indie washed soft set? Fatman ran along the lines of a Welsh band with Celtic roots. We were so wrong (thankfully). The Garbage – St Etienne adjectives are obvious but there is an extra edge to this Betws-y-Coed 4 piece & theirs is a truly professional & powerful show. The swagger from the bleached Paul Adams (he’d pass for Brett Anderson anytime) & a sway from the timid yet confident Andrea on vocals. Add a metal beer keg being smashed with a hammer by an enormous bassist & an almost Killing Joke style drummer & you have Melys. A new LP ‘Casting Pearls’ is out now, buy it & keep these people in food & more importantly in music, cos if you disappoint them they’ll kick your ass you pussycats.