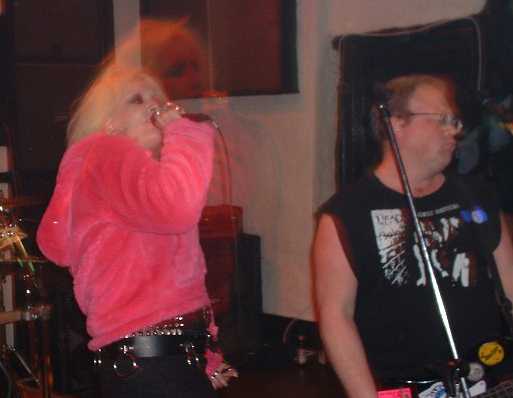 ‘You’re putting us on after these!?’ One of the Mere Dead Men exclaimed to the promoter during a frivolous, hard hitting & well received set by Stuntface. You can see their point & it is respect for a band to accept that fact. I’m becoming a bit of a Stuntface junkie, or they’re stalking me, as it seems every gig I turn up at, they’re playing, I was thinking of changing the name of this site to link2stuntface!

Such ubiquitous activity simply epitomises that this band mean business & yes, they were the ‘local’ band tonight, but only by virtue of coming from Wrexham, which is slightly nearer than the other 2 bands. Stuntface have earned their stripes with the North Wales punk scene & deserve the responses they’re getting.
Me & Steve Sync were discussing their sound as its always spot on & he pointed out that one guitarist has his sound very trebley & the other with loads of bottom end, thus they’re complimenting each other rather than competing. He also noted that they were enjoying the Old Hall as much as the Old Hall was enjoying them.
It is quite unusual for Steve to actually say something that makes sense when you’re well into an evening of alcohol abuse, but the continuing saga of Wayne The Bastard’s herb garden just won’t go away. Steve insisted on calling there on the way to the Old Hall & Wayne politely gave him a tour around the chives, basil & lavender he had on offer. A lack of coriander was noted by Steve & I left the two of them in private to discuss the terms of exchanging cuttings.

Mere Dead Men are fronted by the peroxide Mandy & are old skool punk rock & you could tell by their ease that they’ve been doing this for a long time (17 years to be exact!). And they do it for one reason, because they enjoy it, & if there is a message in there it’s lost in a swirl of guitars & drums. Steve’s philosophical outlook was of a mature punk formula that kept everyone nodding; who am I to argue with that? 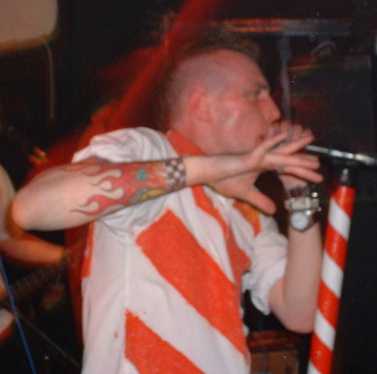 Dead Pets‘ claim to fame if you didn’t already know is their frontman appeared on TV’s ‘Faking It’ programme (he with the pink mohican) where he had to pretend he was a fully trained orchestral conductor. He is also renowned for his love of the tipple & had in their last gig downed a bottle of Jack Daniels before going on stage.
So we could’ve seen a Spinal Tap incident similar to the Lonesome Boys‘ outburst earlier this week (see prev review). Thankfully, if he had drunk himself blind, there are so many people in this band that he wouldn’t fall over due to lack of space!
The Dead Pets brought a brass section with them but that’s about the extent of my memory, which is odd for I didn’t drink ‘that’ much & I do recall watching most of their set, even moshing (in a girly stylee)! Seeking help with this review I emailed Steve; this was his reply:
‘The third band I haven’t a fucking clue apart from the brass section, by that time, my brain had transformed me to a strange world where urinals talk tactics to you, as you threaten to sail single handedly across the piss sodden floor, to the land of the hand dryers. Something was in the beer that night, ask Wayne.’ 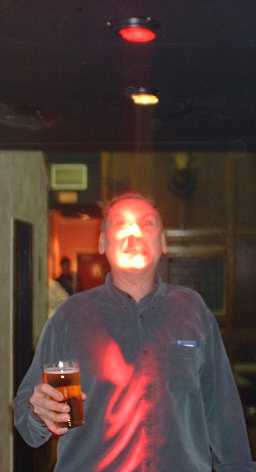