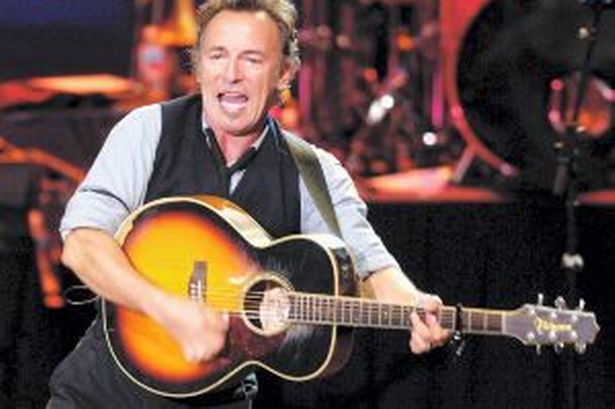 Well what can I say about this? What an amazing performer. I think maybe a few of the bands that are around these days can take a leaf out of this guy’s book. For those younguns of you reading this who don’t know who Bruce Springsteen is, ask your parents. He’s quite literally “The Boss”.
This gig had the most electric atmosphere out of any gig I have ever been to. Springsteen is a master of song writing, music composing and a true rock star. But he doesn’t seem aloof like many other stars who have the same pulling power as he does. I’d like to see the likes of S club 7 and even (talented as he is) Robbie Williams selling out Old Trafford with  thousands of adoring fans in 20 years!

What I find most amazing about this guy is the way that he seems genuinly down to earth. The kinda guy that you could meet in the street and go down the pub and have a good drinking session with him. Incidentally most of his songs are about bars, girls, or cars. But at the same time he is quite political. Like the lyrics to Born In The USA that he opened the set with “sent me off to a foreign land, to go kill the yellow man”. As we all know from current issues, the Americans don’t like anti war messages!

Springsteen for this tour has got back together with his old buddies, the E street band. Steve Van Zandt on guitar, and the one and only Clarence Clemons on saxaphone, Max Weinberg has taken his place back on the drum throne, Roy Bittan on keys and Gary Tallent on bass. You can instantly see how they bounce off one another from over 20 years of working together. They would certainly be able to teach the likes of the pop and “rock n roll” stars of today a thing or two about how to put on a good show. Much as I like new music, I’m a big Green Day fan, and I think some of the stuff the Foo Fighters have come up with is excellent, when I have seen them live they have missed that little something that makes the hairs all stand up on your arms and neck, which is exactly what happened in the setting sun of Trafford Park when Springsteen walked on stage, with cheers of “Brooooose” that all to often sounded like he was being booed by the crowd!

What also amazed me was the fact that the band had no set list. Springsteen and the E Street Band have such a large back catalogue that after each track he just yelled out what he wanted to play next and off they went, seemlessly merging one song into another.

Even after all these years Springsteen can still pull a crowd, it will be a while yet until we see him doing the Butlins holiday camps, or doing a warm up gig in the Pavillion Theatre. There are not many musicians in the world that could go anywhere on this planet and receive the adulation from the fans that he does. He could have done two or three nights at Old Trafford and sold out every one. After a three hour set it was time for the party to finish, but he could have gone on and on, playing hit after hit. After three hours of non-stop playing I still hadn’t heard all the songs I wanted to hear. There are not many acts around the world that could play three hours, and could still go on and play ANOTHER three hours of GOOD QUALITY music.

Of course he played the old hits, Born In The USA, Dancing In The Dark, Thunder Road And Born To Run, but what about Streets Of Philadelphia, The River, Blood Brothers, Murder Incorporated, Glory Days…………

Maybe they are for next time ehhhh Bruce? Please don’t leave it so long between visits next time!