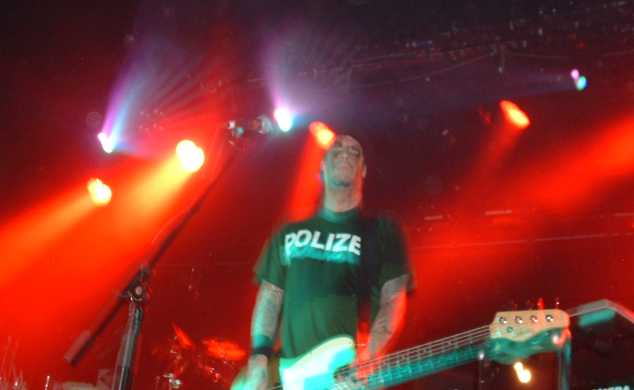 When Pete Alien (vocalist with Alien Matter) buys Killing Joke’s Jaz Coleman his 7th double whiskey before the band go on stage you know you’re in for a good night. We saw Killing Joke on Friday night in Liverpool, which turned out to be a winter warmer before being hit by the full force of the storm here in Manchester 3 days later. The Liverpool gig was rocking & I would’ve happily retired for the week a fulfilled man having seen it, but if Liverpool was awesome, Manchester was devastating. Just on the boundaries of the mosh pit in this crammed Academy was the spot to take it all in, too quiet right at the front where Pete Alien & Milton rucked away, too much boom & feedback at the back where Steve Sync stood grimacing at the soundman’s fumbling fingers (Steve said; ‘after a bad feedback attack I looked over to the soundman, who to my horror, was ‘air drumming’ – twat!!’). No, at the periphery of the mosh pit I had the prime place & my ears were last seen heading down the road with rucksacks in tow, looking for a safer haven to live. 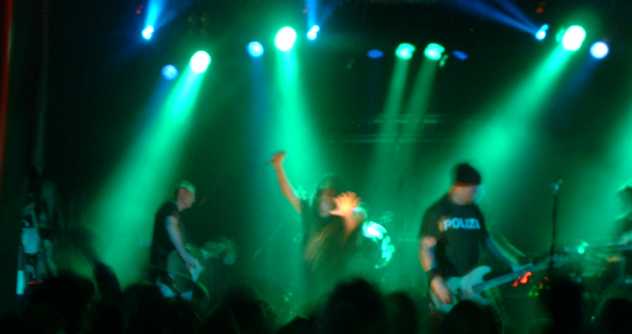 I have to use the word awesome again, for that is what the opening riffs of Communion were, simply awesome. Add the mood change of Raven on bass, who was obviously upset by someone in the crowd as he’d transformed from the mild mannered gent that he was at the bar to a spitting, swearing demon ready to kill whoever he had singled out. He was still cursing as they got stuck into Requiem & the older element of this huge & varied audience lubricated their joints & attempted to crack each others ribs, skulls, jaws etc.

Geordie has got to be the most natural laid back guitarist you’ll ever see, I was quite taken in Liverpool by his ease at playing & by the stunning sound he gets out of that guitar & I commented on it to Pete.
‘He was off his cake on Friday’ said the Alien one, explaining that in their dressing room, Geordie was sat down with his eyes transfixed on the ceiling & had to be prodded to get a word out of him. I was quite shocked by this, but on closer inspection Pete was probably right as Geordie did look off his tits. He was in ‘playing mode’ as Steve puts it, where his mind is on a different planet & if he actually thought about what he was playing he’d mess the whole thing up, but because he’s in ‘playing mode’ he can switch off & not put a note wrong.

Jaz Coleman enters the fray, a man of iconic proportion, a shaman, a demon, a clown, all rolled into one. I always remember him buying 2lb of raw cow’s liver, a bag of live maggots, mixing the 2 together & marching into the NME offices & pouring it over the reception desk. And all because they gave Killing Joke a bad review! So I’d better be careful! That feat always stuck with me as I sent Steven Wells of the NME a rancid pork chop crawing with maggots for giving Sons of Selina a bad review; he, like Jaz’s perpetrators deserved it for he is a cunt. You can take a bad review when the criticism is constructed, but when its simply done to boost the writer’s fat ego then maggots & fists if I ever cross him will fly.

Coleman gathers his flock in, we’re in awe, we’re in pity, we’re laughing with & we’re laughing at him, but showmanship apart we’re looking at true legends before us, whose faces should be carved into the side of a mountain. The Killing Joke sound launched a thousand bands, let’s not forget that & the proof is in the pudding on this tour as to how much a major force they are 5 years on from their last release. Most of the shows are sold out whereas a lot of their peers (& no disrespect here at all) have fallen by the wayside & scrape a living on the cabaret circuit; a look at recent shows by Spear of Destiny, The Damned etc cements that as their audiences age & dwindle.

The frightening new album along with the 2nd LP ‘What’s This For!’ are heavily pushed tonight, both are by far their best 2 releases in my humble opinion.

Set List Tonight – Communion, Requiem, Total Invasion, Wardance, Blood On Your Hands, Change, Seeing Red, Fall of Because, Empire Song, Tension, Kings & Queens, Loose Cannon, The ferocious Death & Resurrection Show a song that makes you feel like you’ve been sexually beasted by something that bulldozed across you, which then reversed back over your twisted torso to make sure the job was done properly, The Wait, Whiteout, Frenzy, Psyche. They hammered 20 songs in all (3 more than Liverpool) into our soft brains, our heads nodded, our feet stamped, our ears bled. We needed more, we craved, we cried, we got it in the form of Asteroids, Follow The Leaders & an outstanding Pandemonium.

Although my ears were totally shot on the way out & I was hearing things in Dolby I did pick a conversation where a seasoned gig goer said that’s the best band she’s seen this year, I have to agree with her & I’ve seen over 150 since 1st January! 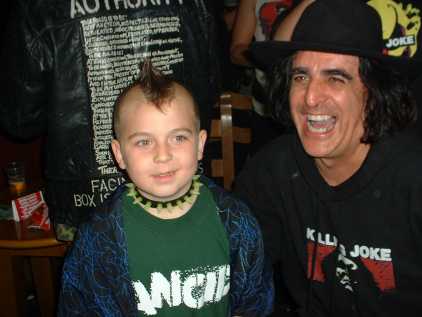