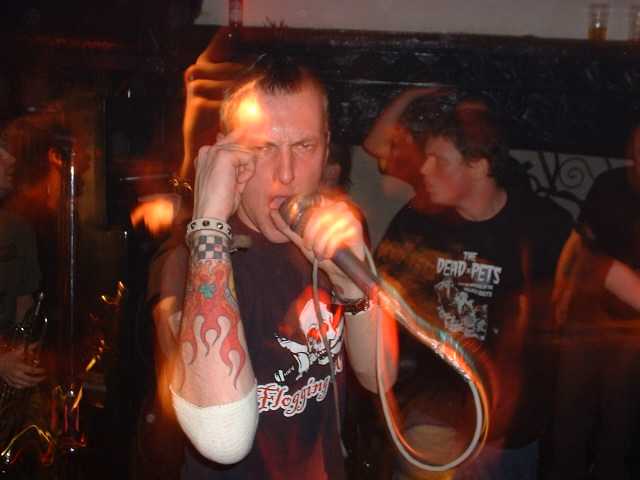 It’s the hallmark of a good night when you’re convinced you’re not pissed, only to wake up the following afternoon with a stonking hangover & memories of all the stupid things you did.
Quietly sneaking in as Alien Matter‘s roadies, myself, Fatman & Wayne must be the only roadies who don’t carry any gear! We were initially disappointed to find the venue bar closed until the doors opened, which meant the conversation was very conservative, there was no topics like tit wanking Gordon Brown or drinking from Jordan like a bucket, nope it was strictly Telegraph Crossword stuff until that first sip of fruity Grolsh was taken. Then it was a free for all frenzied sick fest as we curtailed the politeness & began verbally fisting each other. 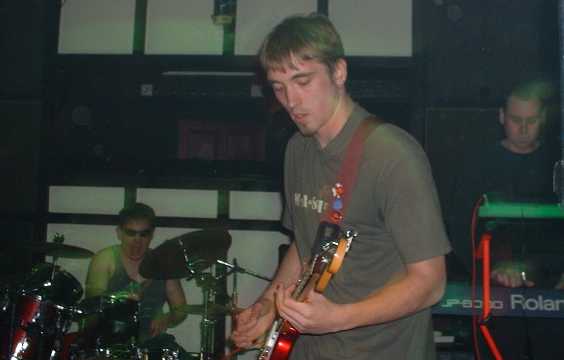 Wayne’s view of the Alien Matter set went like this…

At least I got a lift to the gig with the Crud Crew, but then again I am an honourary member. Five bands on tonight & Alien Matter are forced on first. Steve Sync promised to get hammered on short chasers to liven up the set. There was no need as Pete Alien livens up any evening. So Mr Crud asked me to review the local band but he knows I never remember the songs, so suffice to say they’re good. Second to last is my fave (Kelly & Steve), the last song (Padded Box) had been altered to make it sound more dramatic? OK, but not a good idea for a finale.

With 5 bands on AM overplayed – good on ’em – means the 2 imposter bands on tour with the Dead Pets will have to play shorter sets. As there were no gigs all summer at The Old Hall its fairly packed out with a great atmosphere. Over to you for the rest of the review. (Alien Matter pic above, Cumi, Daz Roddick & Ste Sync)

Thanks for those choice words of wisdom Wayne, Goth however took this opinion…
Alien Matter were shit (serves you right Daz for not sharing your weed you fuck up). Seriously though, when Crud wasn’t touching my groin or telling me to call people cunts, I managed to hear a bit of their set. The quality of AM is that they always sound the way they do on CD. But tonight Matthew they suffered visually, they are much more a ruthless punk outfit when Pete is smashed. So unless he is giving himself a wedgie & fondling everyone’s cocks (girls included) then don’t watch this band; just listen. I’ll give an opinion of the new guitarist when they have played a few times with him. Keep giving you bastards, you excite me. It’s safe to say that when you split your lip & drop a full pint while being passionately snogged by Andy Fatman, then you give Steve the empty glass to drop kick (it didn’t smash) across the dancefloor, you know you’re on your way to oblivion.

Fatman gave us his hazed view of The Hangmen

AAAAH! The memories come flooding back, that mid 80’s “phenomenon” called Psychobilly….teasing your fringe with a can of coke to get a bigger quiff than your mate, (walking to) scooter runs at, err, Colwyn Bay & Rhyl, diggin’ through your Ol’ Mans record collection trying to locate some obscure bit of rockabilly, only to get suspended from school for that ‘ridiculous haircut’ with the rest of the Flat’eads.
The Meteors, King Kurt, Guana Batz et al, seemed to cast the genre with a comedy edge, they didn’t want to be taken seriously. The Hangmen have ventured down a different path, they’re stance is more sleazy. It works well on some tracks, but it’s when they speed things up, your attention is grabbed (unless your Crud who’s engaged in animated beer spitting contest with The Cox.). Don’t get me wrong, they don’t take themselves too seriously, (joining in with between song banter). The compacted audience seemed to like it too, enough to cause ripples of pogoing, slamming & even Cat from Kneejerk was seen straining the straps on her bondage pants.Certainly looking the part, the immaculate quiffs, the style, the guitar, and by no means last, the gargantuan double-bass player who made his instrument look like a balsa wood violin all added to the enjoyment. Blending punk rock with their own take on rockabilly, works tonight, especially when, certainly, the local music is breaking taboos between only listening to one particular type of music, something Blood & Lipstick, Punk in Drublic and D&B have all contributed to in their way.

Vas Deferens gave us the full on punk rock’n’roll in a Cock Sparrer stylee, which I assumed was because they were from the same neck of the woods, plus there were a couple of CS t-shirts doing the rounds, then I was told they did some of the bands covers as well. Maybe they were a tribute band! 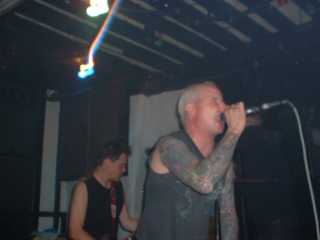 Goth went over to see if he could cop off by blatantly asking someone twice his age; she walked off as soon as he popped the question. And Instant Agony (left) took to the stage to play a ferocious 25min set of punk anthems, including Think of England & No Sign of Life. Not content with parting with my money on an Instant Agony t-shirt I still felt I could give the band more & I duly despatched half a bottle of Bud over Hocky’s head while he was singing.

With the prospect of diving into hedges on the way home where Fatman will hit the tarmac hard enough to make a dull thud we absorbed the Dead Pets (main pic). Led by the Scottish born Welsh man brought up all his life in North Yorkshire (that’s what he said to me as we argued over whether there was ever a Rock City in Leeds) you know you’re guaranteed a great show when these guys deliver. Five bands does take its toll & the crowd tend to drift away as night turns into morning. The Dead Pets fair do’s to them gave as good as anyone could get, with their Malaysian Eskimo vocalist amongst the crowd as far as his mic lead would allow. The excellent brass section gives the punk rock an almost cabaret feel without being at all cheesy.

We parted with the place still in full swing, it was either that or get barred for doing something stupid, which we promptly did in the kebab shop in Colwyn Bay weighing ourselves by means of fireman’s lifts; if you’ve seen the size of that pair of fat bastards (Sync & Fatman) you’ll understand why my back is killing me now. 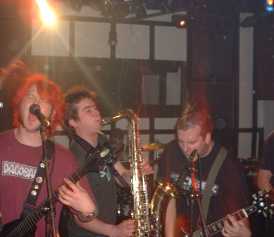 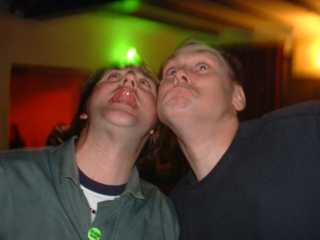 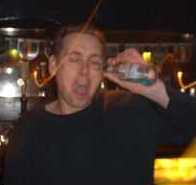 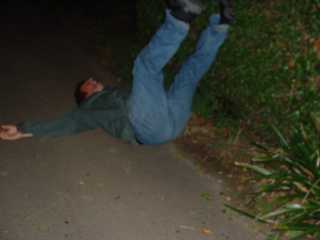