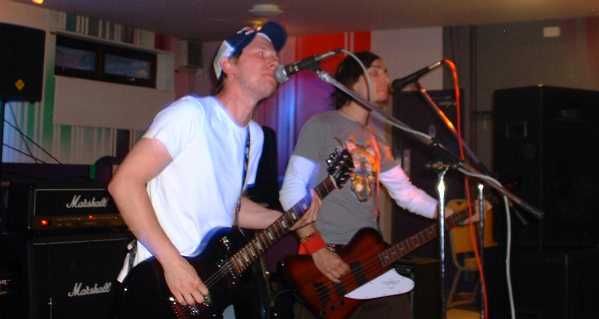 One thing to learn when putting on gigs in as fickle a town as Rhyl is keep it local! The kids appreciate seeing bands from out of town, but they won’t drag themselves from their Playstation games on a Wednesday night if their local heroes are not going to be there as well.
A double Scouse bill saw the lowest attendance yet to these Bar Blu nights & even the free entry could not coax them in. Unfortunately for the locals who stayed at home they missed 2 very different but excellent bands.

I remember those dodgy days of turning up in an alien town where no one had ever heard of you so no one turned up. We’d plug in & play to the soundman, support band & bar staff. At least Flesh Resonance (pic below) were lucky enough to add a few of us locals to the list at their low key debut show.

It may have been their 1st gig but live performances are not a new thing to these guys 2 of whom used to make up part of the grindcore merchants Morbid Symphony; the quiet unassuming Tony on bass, looking almost uncomfortable with what he was playing & the outstanding guitar work of Keith. Andy Morris provides the keys, industrial sounds & extra guitar (nice haircut!) but this band are crying out for a singer. With low key being the theme, you just know that on the festival stage with 500k of power behind them, this band will simply blow you away with the drawn out ambient-industrial tuneage (there was even a hint of Alien Sex Fiend in there). Their LP, ‘The Dark Between The Stars’ is well worth checking out. 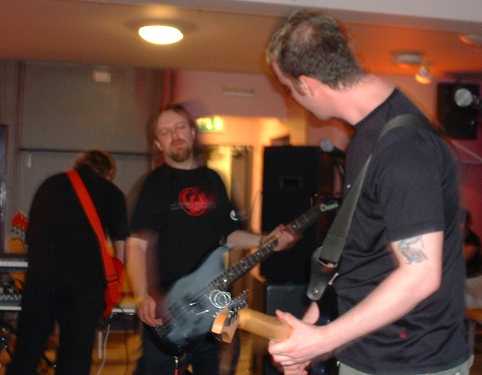 Cadium have just signed up with Glasswerk & you can see why the organisation was eager to snap them up, they have something special in their possession. These boys are at ease on the stage, they’re relaxed enough to enjoy what they’re doing but not so casual that they’re sloppy; no way, Cadium are tighter than Steve Sync on Comic Relief night (& that’s tight). In Stuart Doherty they not only have an exceptional guitarist they also have a great voice; the guitaring is exceptional because he can do it while singing, & where he lacks in the looks department, his counterparts make up for it. With a bass guitar that purists would die for, Col Smith (definitely not a scouser) has the looks, the moves & more importantly the ability to play with ease, as Cadium spill out their own brand of guitar driven rock-punk.

I hope both tonights bands weren’t put off by the no show & return to support some local outfit & a bridge is built between the bands of North Wales & Liverpool.

You’ll be able to check out both on the new radio show next week. You can also check out their respective websites (see their entries on the A-Z of the Liverpool section of this site).