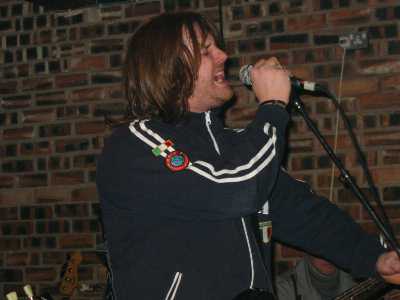 (review & pic by Elly Roberts)
Wrexham’s recent showcase special at Central Station proved to be a very interesting night in many ways – with all the ups and downs of Rock’n’Roll. Headline act Beluga from Deeside showed they are extremely competent musicians.

Kicking – off with Messiah and its haunting resonance with added guitar overlays, they made quite an impressive entrance. Feet Like Lead went a bit more up – tempo and was a good follow on choice, with Shadow proving to be the best song of the whole set. After that I felt the material getting weaker, losing its way and becoming self – indulgent as the re – run on the video proved. I was expecting them to lighten up a bit, but in the end I found myself switching off. Much of the material would make good album choices, with very little potential in the singles market. I also think they seriously need to sort out the lead vocals department as there were far too many flat notes by the frontman. Band info contact www.beluganet.com

Second on, Wrexham / Chester four piece outfit The Draft proved to be a totally different proposition. Lead vocalist Taylor has all the makings of a bone fide singer – songwriter of the highest quality. He has stage presence, charisma and the looks to be a star in his own right, but I’m certain that he would rather make it within the confines of a band. Taylor possesses an inner calm, with a cheeky confidence which was refreshing. Unashamedly mainstream, they have the capability to really go places in the fickle showbiz world. I say that because on the evidence of their slot, and the benefit of a video recorded during the show. It serves to consolidates my opinion, they are destined for greater things. I can just see them on the huge arena stages supporting the big acts. They went down really well with the crowd and made many friends in the process. Their set of seven songs made a real impression on me, particularly the acoustically driven Last Goodbye, the dancey In The Park, Don’t Don’t, and It’s Happening Again which showed solid songwriting mixed with catchy tunes, superb guitar riffs and picks by Richie Gelder. There were no problems with the rhythm section as Phil Jones on drums and Lee Edwards on bass held everything really tight. Weaker material came in the form of What About Us and Fear. Taylor’s vocals were crystal clear and he really knows how to convey a song with his happy – go – lucky style. My advice to them right now: getcorporate sponsorship and book some studio time. Best band on the night.

Llandudno based Pocket Venus roared their way through the opening slot. They fall somewhere between melodic pop and classy Indie -Rock, a revelation in itself. It was unfortunate that they were plagued by sound problems which was not of their doing. However, that does not give licence for band leader Chris Yates to be very unprofessional in lashing out – calling the venue “Amateurs!” That sort of behaviour does not solve a difficult situation , in fact it makes it worse. But I can understand the inherent frustration. Cool heads are required when it happens. On the other hand, there is no denying their collective talents, found on e.p. singles : Make It Through Your Day and Tell Me Why. The former is a truly sublime song receiving some attention from Radio One, and rightly so. If I heard this on the radio, I’d go out and buy it immediately. Devine opening chord sequence, lashings of keys, swirling lead guitar, and great vocals by Yates – a real beauty. With the right kind of push it’s good enough to be a number one hit. It was given an outing as their second song , proving a real winner with the crowd. Other highlights included the ‘ new’ single Tell Me Why and Like You. Most of the clever bits by Dave Robinson and Dyfed Roberts were drowned – out by Yates’ powerhouse vocals and guitar . This may well be attributed to the poor sound balance, anyway, on the night, whatever the reason, it didn’t do justice to their performance. At the end of the set Yates lost his composure again, having an uneccessary pop at the venue, leaving a bad taste in the mouth’s of many people. From the EP’s you get a feeling they have mastered the art of studio work, as all the instruments are spot on, but stage wise they need to pay more attention to lead guitar and keyboard that provide textured layers on the overall sound. The more I listen to the recorded material, the more I’m convinced they have the potential to make it, and manager Neil Crud is right to invest in them. Pocket Venus use a lot of instrumental subtlety and dynamics that not many bands would touch these days. Whatever I say, you won’t forget Pocket Venus. I wish them well.

It’s healthy to see young musicians mastering their craft out on the road : it’s the best learning ground they will ever tread : these boys don’t expect it on a plate like The Fame Academy and Popstars brigade !