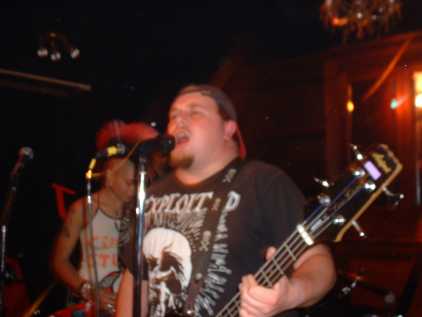 I had a text off a band last week, it read: ‘Hey you bastard, where’s our review?’

There is a limit to the number of times I can review a band & actually have something to say about them, we do try & get a different one of us to review the same local band at different times so you get a fuller picture from people with extreme musical tastes. Hence only a paragraph on Kentucky AFC from last Thursday, as they’ve been covered by us 4 or 5 times (I do love ’em though!). So you’ll get some nice pics of Alien Matter tonight rather than a review, as I went tonight to enjoy the riotous show as I did at the Stuntface, Kneejerk, Cox show a couple of weeks back. The Alien Matter set was filmed by Wayne The One Eyed Bastard & on seeing it Cumi said it was like watching a riot on TV. I’m covered in bruises & Dave Cox tore my spanking new KAFC t-shirt the twat. 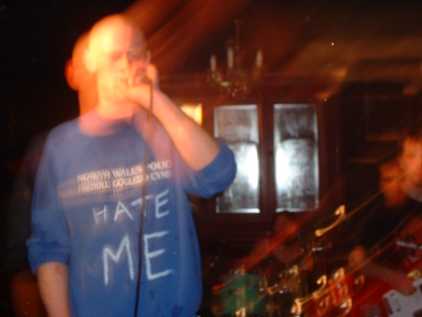 Dogshit Sandwich hail from Brum & sport every hot blooded male punk’s dream; the coolest babe guitarist ever! This is no compromise punk rock, proving the scene is alive & kicking. If punk is dead, then those who suggest it is would never pass an autopsy exam.
‘This ones only got one line, but its self explanatory, its called Tony Blair Fucking Dickhead.’ Dogshit Sandwich are probably right on that count, but they may or may not remember the 20 years of Tory shite we had to crawl through & I hope that they don’t have to change the title to Michael Howard Fucking Dickhead in the future.

The lyrics & songtitles did take me back to the tiresome days when every punk band sang from the same hymn sheet, ‘Blah blah I’m on the dole & I don’t care, blah blah fuck the police, blah blah murdering government bastards.’ Not that I’m against that, it was just ground into my skull from an early age. I went to the Crass school of life & the Conflict college for Further Education so I know every whinge, gripe & concern there is. But I suppose to hear them again is OK as its only these Brummies & The Cox I’ve so far heard with a conscience during this new wave of punk.
You could see the buzz of Dogshit Sandwich, they got off on the venue & the venue took to them, hey we even got Smash The Disco (The Business) thrown in for good measure. To see their CDs & t-shirts being bandied about afterwards shows that if you put yourselves about & give a decent show you can sell your merchandise afterwards. I somehow completely missed Appease, through not realising they were on (too quiet?) so if anyone wants to do a write up in the next couple of days, please do. 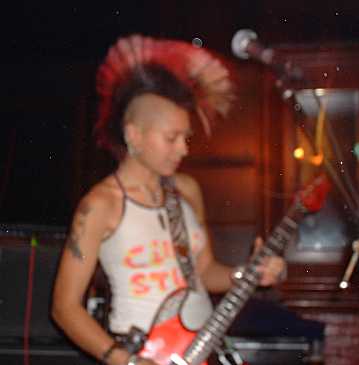