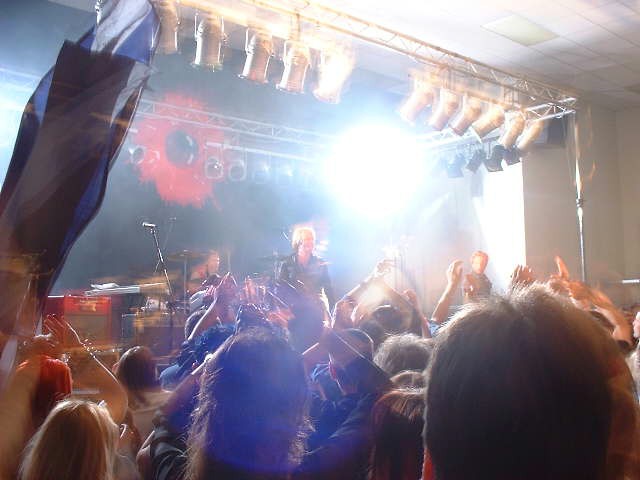 Having surfed over the crowd a couple of times (hey! it’s tradition) & exchanged a few choice words with the security, I decided to take a step back from the sweating pit & look at what exactly was on the stage. We are talking legends here, legends of their day with enough stature to have their faces carved out of the side of a mountain.
Mike Peters gave us The Alarm, this is his gig, his annual celebration, his gathering, his payday & his homecoming. For someone unpretentious enough not to have gone ski-ing down the cocaine slopes of London at the height of his career, Mr Peters also has a modesty about him where he could have been upstaged at his own show by Kirk Brandon singing the Theatre of Hate classic Do You Believe in The Westworld, or by Pete Wylie singing that heart warming Mighty Wah! tune Come Back, or by the master of the guitar himself, Billy Duffy doing his Cult masterpiece She Sells Sanctuary. Add this to the members of Mike’s band who come from backgrounds of Stiff Little Fingers, Gene Loves Jezebel & Gorkys Zygotic Mynci, & the faces in the mountains description becomes more relevant. We are witnessing a super group, or a super gathering, but not the anal indulgent Emerson Lake & Palmer type stuff; this is like a thank you to the 2,000 people who made this probably the busiest yet. 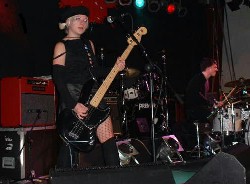 The 2 pints at the Imperial (hey! it’s tradition) meant we must’ve been drinking quickly as Fairziff, Sync, Fatman & myself arrived just in time to catch Black Swans (left) opening their set & sounding absolutely superb. Last year, they would’ve froze playing on a big stage in front of a big crowd, this year they looked the part, sounded the part & are almost the part, the finished article is not too far away. I had a drunken heart to heart later at about 4.30am with their manager Mike Jones, I hope he remembers what I said!

I had to leave when a surprise 2nd band took to the stage; the word – band – is used very loosely here. Had there been a drummer, keyboardist & bassist playing the same thing I’d have stood in awe at the wash of industrial noise before me. But because we were presented with a singer, a miming guitarist & a backing tape I left in case I was ejected from the building for climbing the stage & punching their lights out for cheating us. It was 15 years out of date & total shite.

Although armed with a notebook as I knew the chances of me remembering much of the show were slim I’m afraid I was too drunk to write by the time I hit the after-show party where Towyn’s X-Ell played to a packed downstairs room. I was also too drunk to stand up & had to eat a very expensive but bland lasagne ‘n’ chips, but judging by the crowd response it sounded like they had a pretty good show. I also remember asking Kirk Brandon if he’d take a pic of the Crud Crew (he ignored us) & also recall seeing Fairziff in an uncompromising position outside the gents toilet (photo available £10 inc VAT).

The Gathering, the 10th such event, is like a greatest hits package where you’re guaranteed, Rain in The Summertime, 68 Guns, Blaze of Glory, Spirit of 76 etc. But it is also far more than that, I don’t recall too many home comings by the Rolling Stones or The Manics or anyone for that matter where they have an annual weekend event, one night acoustic, the other electric with a 5-a-side soccer game & quiz during the day.
Particularly liked the Poppy Fields song, see you next year.