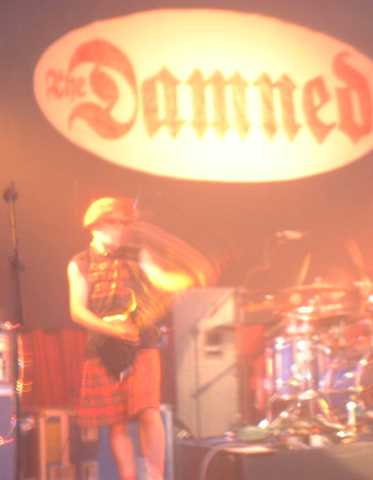 Tattoo removal by laser treatment is very painful & very expensive. I’m halfway through a 12 month course & ironically one of the tattoos to be removed is a love heart with The Damned beautifully designed by the side of it. I was 18 at the time & in love with the band; a love affair that hasn’t waned. So in the run up to this gig I’ve been like a little boy who’s just found the keys to the local sweet shop. I’ve grown up with The Damned, ‘Machine Gun Etiquette’ is rated in my Top 5 Albums of all time, & since that 14 year old spikey punk kid witnessed them at the Pier in Colwyn Bay in 1981, I’ve been a changed man ever since, or was it after being buggered by the support band The Anti-Nowhere League?.

The Damned are not pretentious, they’re not here to provide cabaret, a superb new album will vouch for that. Neither will they deny they have a past, unlike The Buzzcocks who tried to reinvent themselves & failed miserably. Nor do they give us a Manics type gig where only the hits are played, there was no ‘New Rose’ ‘Grimly Fiendish’ or ‘Wait For The Blackout’. Instead we had a well chosen mix of old & new, from ‘I Fall’ (c1976) through to ‘Amen’ (c2002). The new LP shows The Damned back on track after the dark post-Eloise years where one element was lacking; the genius that is the clown Captain Sensible. Donned in a kilt, white pumps & a black thong The Captain may well add a circus feel to otherwise gothic proceedings, but it is his psychedelic influence stamped all over The Damned’s soul.

Prior to this performance, local blag artists Homespun proved that they were just toying with us last week (see review) as in the space of 7 days they turned full circle & turned out a performance that was totally together with a big sound to fill the big space a crowd provides for an opening band.

Metallic was Kate Bush on Absinthe remarked Andy Fatman, ‘A whazzo pair of jugs’ quipped Cumi. A backing tape & a wannabe goth singer is not what the doctor ordered & we soon turned our backs & discussed the market potential of Gall Stone Gravel for gardens. I later learned that Metallic had bought herself onto this tour; I would’ve paid her the same to stay at home.

The Damned’s mainstay Dave Vanian still looks exactly the same as the last time I saw them (the bastard), which must’ve been about 15 years ago & Fatman remarked that his voice is so good he’d love to hear him on a Nick Cave stylee crooning LP. Vanian’s wife (the victim of lustful looks from Fatman) is bassist Patricia Morrison, who most of you should know from her Sisters of Mercy days, she’s not in the Algy Ward or Paul Gray league of bass playing but she does even the band up, providing a gothic ally for Vanian against the comedy of Sensible & the absurd movements of keyboardist Monty (he IS on drugs).

For the purists, the set was Street of Dreams / Nasty / I Fall / Disco Man / I Just Can’t Be Happy Today / Democracy / Amen / 13th Floor Vendetta / Ignite / song.com / Under The Floor Again / Thrill Kill / She / Neat Neat Neat. A sneaky, but staged encore by Captain Sensible where we had a quick couple of verses of Happy Talk before he was joined once again by the band to finish us off with Love Song / Would You Be So Hot (If You Weren’t Dead?) / Eloise / Smash It Up (parts 1 + 2).

Rumour has it The Damned ‘did a runner’ after the show, ie, didn’t pay for the hire of the venue, leaving the wealthy rate payers of Llandudno to stump up the bill for the council owned property. Punk’s not dead yeah!

I’m off now to find a tattoo artist.