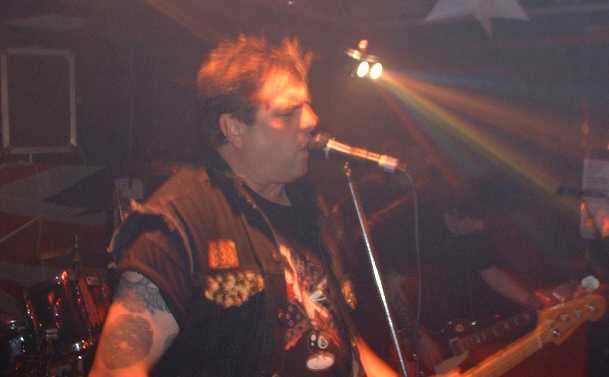 It was a cross between Tarantino’s All Night Titty Bar from the film From Dusk Til Dawn & the pub scene from American Werewolf in London. On arrival we were told to stay on the road & keep off the moors & there was a 7 pointed star on the wall.

This is Clynnog Fawr, a place unaffected by Tube strikes, taxi ranks & dodgy nightclub bouncers, for this is the middle of nowhere – welcome to rural Wales. A look at the map on the pub wall will tell you ‘Clynnog Fawr’ & marks a stone age burial chamber (where Tarantino’s topless zombies lie in wait no doubt).
Wayne The Bastard & myself were greeted by Instant Agony frontman Hocky, for it was in honour of his 40th birthday that D&B Promotions had set up this out of town event. The scouse accent enquired;

‘How are ya? Thanks for coming. When are 4Q gonna reform?’

Our reply was, fine thanks, it’s a pleasure & we’ll do it for ten grand. Which is maybe a little too much for the collective Llandudno & Birkenhead punks to muster in a whip round. 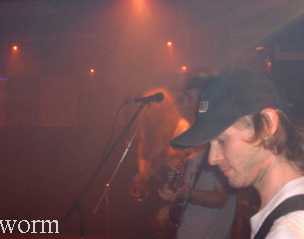 With the Keystone Cops sat outside with a worried look wondering what they’d do if 150 punks kicked off, Worm wriggled to the stage & warmed up. The commemorative T-shirts noted that Menace were in support, but they have just split up over political differences. One of them must’ve decided that the GLC wasn’t full of shit & could no longer play the band’s only ‘hit’. The coach load of mohicans & spikey tops from Birkenhead joined those already present & Worm hammered through 20 songs in 30 minutes. Wayne had earlier overheard a conversation while he was cottaging in the gents; it was between a scouser clad in leather, bristles, studs & acne & someone who lived in the sprawling metropolis of Trefor a couple of miles up the road;

‘What music are you into?’ Asked the heavy Welsh accent.

‘I’m into heavy metal, I love Megadeth & Metallica,’ the Welsh lad commented. Next year hip-hop will be breaking in Clynnog.

As the tumbleweed rolled blissfully by outside, Worm were playing so fast & furious that their set was over before it began. One minute 30 second chunks of punk rock segmented by 1-2-3-4. Phew!

It gave the locals brave enough to visit the pub a chance to let off some alcoholic steam as the seasoned hardcore crew nodded in appreciation. Yes it was a clash of cultures but without the trouble you’d almost anticipate.

I felt like presenting Lurkers mainstay Arthur a medal for travelling 240 miles to do this gig as he spent the opening 15 minutes whinging about the sound & how he’d travelled ‘240 fackin’ miles’ to play & ‘I want the sarnd fackin’ good cos I’m not gonna rip my fackin’ throat out trying to fackin’ hear my fackin’ self.’ It turns out he was singing through the backing vocalist’s microphone, the fackin’ cockney toilet! 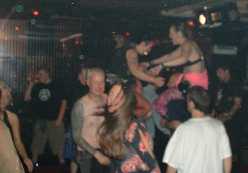 It started off pretty dour & I began losing faith & thought it was time these lads got themselves proper jobs as they weren’t very good at what they were doing. I wasn’t sure whether the stuff they played after the opening Freak Show was new Lurkers material or forgotten LP tracks; either way the songs were the unimaginative plod punk you’d expect from schoolboys & not from a band with 25 years’ pedigree.

Thankfully that pedigree did show through as our chum Arthur & his 2 companions got it together & started knocking out the hits. With the entire Lurkers 7″ singles collection nestling in my record case back at the House of Crud I had forgotten just how many gems they actually produced, Just 13, New Guitar In Town, Cyanide, I Don’t Need To Tell Her & their highest charter at No.45 in 1978 Ain’t Got A Clue. I’d also forgotten how good their version of New York Dolls’ Pills actually is, & that grape inspired love song L’il Ole Wine Drinker Me.

They didn’t play This Dirty Town but hey! this isn’t punk cabaret!!

See you at Penrhyn Old Hall on Nov 9th.