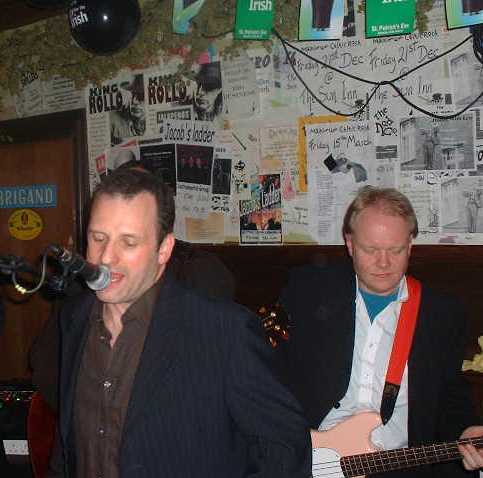 “It’s like playing at fucking Crufts.” Exclaimed DJ Mahone (aka Mark Radcliffe) as 2 dogs of the animal kind walked across the stage. The dogs in fact looked so wolfish that Andy Fatman thought there could be a 5-pointed star scribed on the wall behind the posters as the American Werewolf in Llangollen stalked the shadows. What you will find round these parts when urge is upon ‘em are the Family Mahone. How much longer they will be able to play in a setting as big as my living room remains to be seen but let’s not think about the future, let’s sink a few pints, sing about the past & enjoy the present.
With St Patrick’s Day jigging up on the morrow it was fitting to entertain the locals & 2 car loads of scallies from St Helens in a traditional real ale pub & when we all swayed & sang to Dirty Old Town it brought a lump to the throat on an otherwise bithesome evening. The frolicking began after the opening tinkling from Christie Mahone because when Radcliffe did the obligatory 1-2-3-4 Joey Ramone Mahone count in, the stray dogs started barking. It was another one of those perfect comedy moments & set the tone for the rest of the 2½ hours.
As always the liquid refreshment flowed downwards & the spirits rose, Radcliffe took it upon himself to destroy the St Patrick’s bunting by playing drums on them, blissfully unaware that a medical student will probably be doing the same thing to his liver in the not too distant future.
The sign of a good band is when you remember their songs on only the 2nd time you’ve seen them & having seen many of the same bands many times & not remembered a bleedin’ note, I must then tip my Guinness hat to the Family Mahone for adding depth to the diddley-dee tunes, & for pausing between each song to let the bursting audience trudge across the stage to get to the well positioned bogs at the back.
The hat also comes off to the Sun Inn for the massive pot of stew they served up at half time (where did those dogs go?).
I would’ve reviewed the Family Mahone CD for you & tried to blag a copy after the show but whatever they said to me it wasn’t in English (or Welsh, or Gaelic), it was soaked in alcohol.