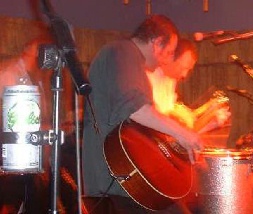 Fuck me with a can of Draught Guinness! All those years I spent being an angry young man in punk bands, catching flying spit with my face, getting involved in aggro & being banned from everywhere, when I could’ve been doing this.
The formula is very simple; gather some of your drinking mates (preferably with musical talent) & get pissed with your audience.
The Family Mahone formula is just as simple; you need 2 or 3 fellas who look like something The Bachelors might throw out at night before going to bed, a potential tree hugger, a driving instructor & a daytime Radio One DJ (you couldn’t make this up). It’s all about diddley-diddley-dee tunes of the Irish roving stance played as a background to sad tales of pissing in Salford doorways. Bizarre, but it really works.
The revolution may well start at closing time but we’re all going to be too pissed to care at this very political gig; the politics of drinking.
’This is another drinking song.’ announces the boy Radcliffe after a baiting session with the crowd. A confessed advocate of Anglesey Mark Radcliffe showed off his local geographic knowledge & also mentioned the last time Family Mahone played the Bulkeley: ‘The tables were all taken down the side & there was a single loon on his own in the mosh pit.’
A year on & their 1st gig of 2002 & the venue is packed full of people with the single intention of having a good time. Thankfully the Family Mahone have that exact sentiment as the beer flowed freely (well, two-pound-a-pint-ly) & the band got more & more inebriated. It didn’t matter as we all did together.
It does make you wonder why someone on a daytime Radio One DJ’s wage would bother sweating it out in the back of van & get stuck in traffic by Abergele to tour with what basically is a folk band (albeit a folk punk drunk band). But the evidence is as obvious as a Coronation Street storyline; it’s because Mark Radcliffe enjoys it. Although how much he’ll be enjoying a very thick head this morning remains to be seen.
So St Craig David’s Day brought about a refreshing change from the indieland nu-punk-spunk-galvanised-metal, & if you fancy that change once in a while then the top option on your list should read – The Family Mahone.
(Neil Crud) 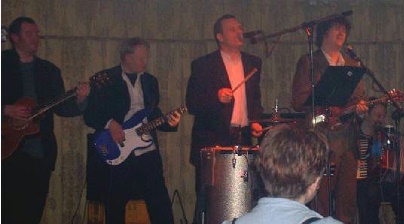