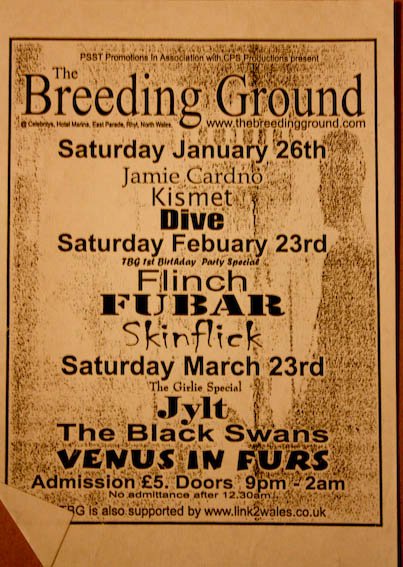 I wasn’t going to review this gig because I had to leave early, as I was still suffering from a hangover sustained from the night before (blame Fairziff and Fatman for that). My early departure meant that I missed Jylt (the last band on the bill). So I apologise to them for the absence of the review, and myself, though I heard Jylt played a blinding set.

We Start Fires from Darlington came on first, and for me, they were a breath of fresh air (musically) to The Breeding Ground. Fronted by two girls – guitar + vocals and keyboards + vocals respectively, along with their male friends on bass and drums, they pumped out their own Indie Pop songs with the style and confidence of a well-gigged band. Good strong vocals from the guitarist and backing (almost rapping) from the keyboard player. The dance floor steadily got busier as their set went on, and they finished with the crowd in their hands.

They may well start fires, but tonight, Black Swans were at hand to extinguish their flames with gushing accuracy, as they pouted and powered their way through their increasingly impressive set. I’ve now seen Black Swans about 3 or 4 times and can recognise most of their songs (unfortunately not the names). They fill the stage with confidence and presence, and this band look the part, I last saw Black Swans supporting The Alarm at ‘The Gathering’ earlier this year, and there, they had to impress all ages of Alarm and Mike Peters fans, which they did very well, but nervously I felt. Tonight though, no nerves on view as Sarah (vocals + bass) performed and seduced the crowd into a frenzy of moshing and person carrying (4 people lift somebody onto their shoulders, and carry them across the dance floor, to the other side???) much to the bands amusement. Tom (guitar) kept the ‘Rock Kids’ happy with his impressive guitar styles, ranging from huge sustained chords into well sequenced lead riffs Hendrix would have been proud of. Along with James on drums, they really impressed me, and every one else watching tonight. They looked like they enjoyed playing every note of their set, and at one point I saw Tom throw his fist up in the air, in a ‘Rock God’ style, obviously savouring the moment, and maybe imagining that stadium audience he could one day be playing to. This band surely must move on to greater things, they have the full package, and the backing, which must look attractive to the ‘music industry’.