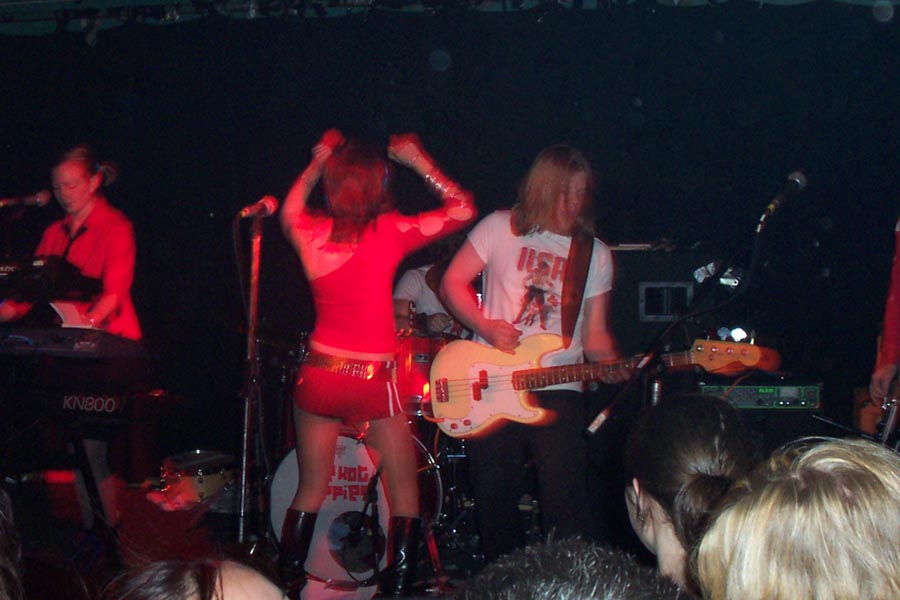 The last time I went to Aberystwyth I spent 2 hours trying to persuade a stoned friend not to throw the TV out of the hotel window we were all staying in. He reckoned he could justify it somehow but I wasn’t prepared to take that risk and we compromised. He went off to throw his TV out of his hotel window. That is my lasting memory of Aberystwyth apart from the bar on the pier which was heaving with students. It seems only natural that Aberystwyth should produce musical talent with such a student collective, fortunately the Hot Puppies are part of that talent.

Tonight was the Hot Puppies’ debut gig in London and as debuts go it was one of the better ones. I always find that band’s who have to travel great distances to their gigs, play with much more passion and energy than local bands. If you’ve been up for 12 hours and spent 5 hours in the back of a transit van heading down to London to play a gig, you put in a much better performance. Believe me. The opening song was just that, a good solid number – catchy and melodic. The band certainly got into it straight away. Vocalist Becky Newman put in a great vocal performance on the opener, clad completely in red you can’t seem to tear your eyes from her. I did get the feeling that she was a bomb waiting to explode; I kept waiting for her to go wild and to be fair she did – but in controlled short bursts. Thankfully as the set went on she grew more and more energetic as the adrenaline was kicking in. I can truly see this girl being a (famous) rock sex symbol in a few years time. She has a good and distinctive voice and you can hear that in time it’s going to be a great voice. Loved the hot pants. 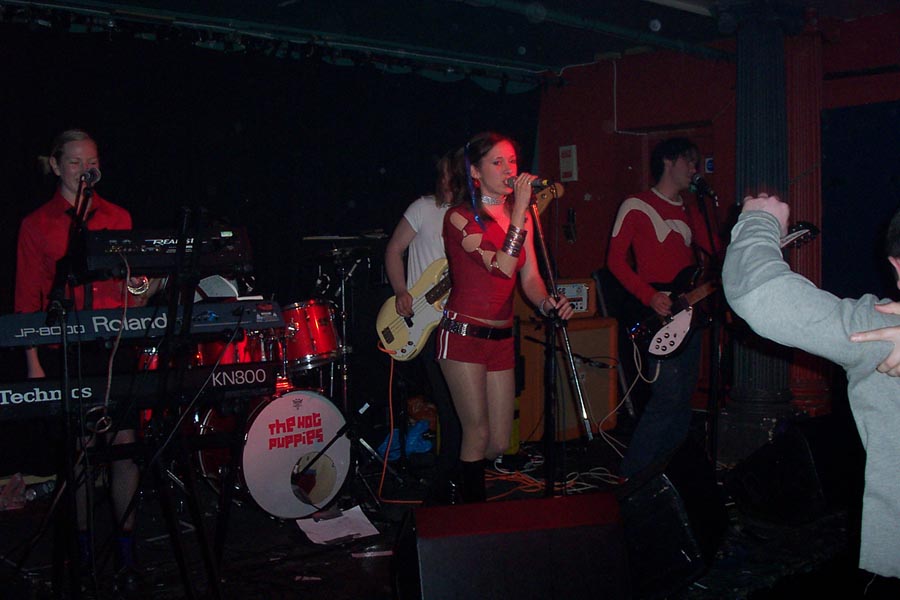 Already by the second song the band achieved a good empathy with its audience. It was very difficult to see who was their friends and who was the punter off the street, everyone seemed to be genuinely entertained. Guitarist/songwriter Luke Taylor seems to be a master of the 3 minute tune, interweaving hooks and melodic lines into the overall canvas of the Puppies sound. ‘Why spend 5 minutes telling a story when you can do it in 3?’ I was once told by an American punk, fair comment. Luke knows this and dispenses with the padding and produces some great little numbers. It is so easy to get a tune and pad it out with 3 minutes of guitar solos and instrumental breaks but for a band like the Hot Puppies, there’s no need. Luke also plays a gorgeous Rickenbacker so he was in my good books immediately <lol>.

Some punters at the back were making the usual sheep shagger jokes (yawn), ‘yeah mate we fuck them but YOU eat them’. I really wanted to say this to their faces but there were 3 of them and I didn’t think a notepad and a camera was much defence. I liked the little touch of the stuffed sheep on the PA speaker – subtle. By this time Becky had managed to draw the crowd inches from the stage and the moshing had already begun.

I was struggling to categorise them, New Wave? New New Wave? The Next Wave? Who knows? There was definitely that late 80’s New York era feel to their music along with some Devo for good measure and for some reason they reminded me of the Dandy Warhols. As I’m not really an expert on the bands that influenced the Puppies (Devo being the main one) and I can only speculate and draw from what I do know, but I could definitely see the Puppies supporting someone like The Strokes.

I can’t write a review without mentioning the rhythm section. Ben Faircloth and Rupert Wood are a good solid unit, pounding bass lines and good solid drumming. I must say that I felt bassist Ben seemed a little out of place (not to underrate his bass playing which was excellent) but his look seemed so removed from the other members of the band. Back to the gig and the standout track for me personally was ‘I Feel Like John Wayne’ it has chart potential and a great pounding feel slightly reminiscent of the Dandy Warhol’s Get Off. I found myself comparing them to the Warhol’s because both bands share that raunchy raw energy and great look.

In essence it is Beth’s responsibility to gel the Puppies sound and bring it into focus with the rhythm section, Luke’s punky guitar style and Becky’s charismatic vocals; something Beth does whilst also providing the harmonies. 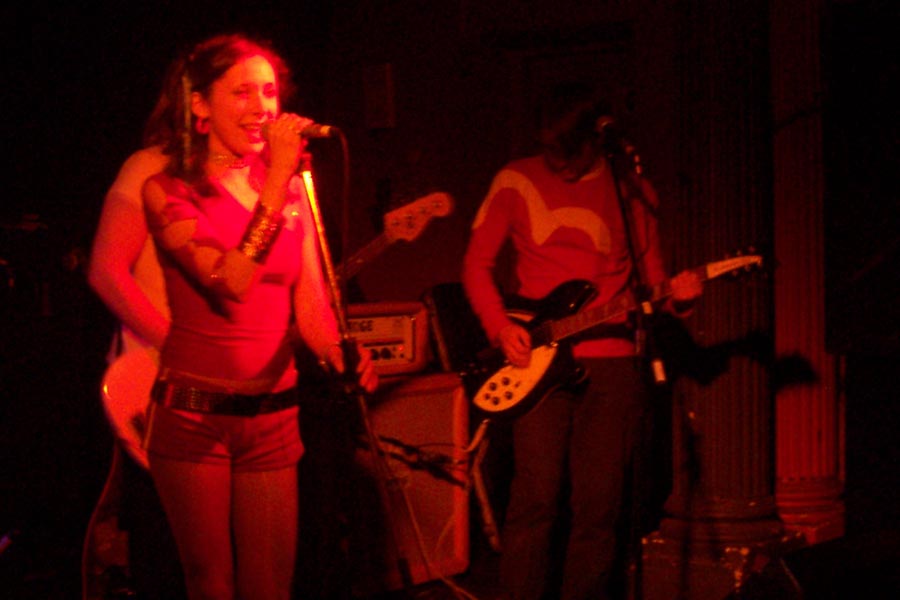 The crowd clearly loved every minute of it and it was getting a little rowdy down the front. Soon it was all over and then something happened which I have never seen from an unsigned band playing in London. They got an encore – and the sound guys encouraged it! Sound engineers have normally shut down the desk and are propping up the bar before the last cymbal crash is heard. Tonight they let them play on. I think they would have got lynched otherwise though so probably a wise decision. But, just when I thought the Puppies could do no wrong they dashed all my hopes – they played a cover version. A COVER VERSION! In LONDON! My heart sank as the started to play the Bangles Walk Like an Egyptian, they had committed a cardinal sin. Why did they have to do this with so many excellent songs of their own? My mind raced back to Manchester where I saw a band get bottled for playing a Stone Roses track and I feared the worst…

There’s nothing worse than being wrong is there? The crowd lapped it up. In fact a few more people came back in from the bar to watch them play the cover. Another raucous ovation and the end of an excellent debut gig.

The Hot Puppies are a very watchable band and do possess that first listen quality. Their songs are catchy and well constructed, short but sincere. They seem to share a mutual empathy on stage which flows out onto their audience. I really hope this band succeed and I would recommend going to see them if you ever have the chance. I couldn’t really find many bad points because most of them will disappear with time and experience. As a band, the Hot Puppies still have a long way to go but you know they are going to enjoy every damn minute of it.