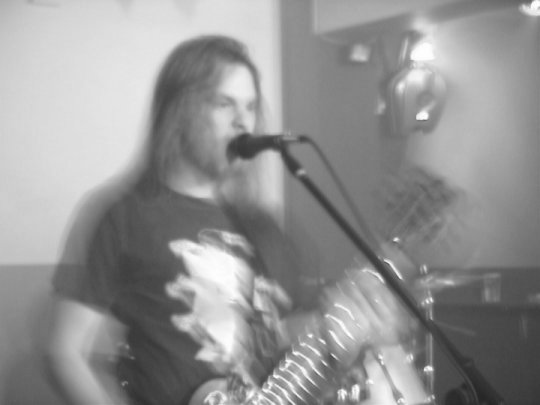 It’s weird going out half way through a Saturday night, sober (driving). I picked Fatman up, and we made our way to The Breeding Ground arriving half way through Dammerung‘s first song. I have a soft spot for ‘Gothic Rock’ in small doses, and I liked their sound, on first impressions they were very ‘Sisters Of Mercy’ with the ‘Andrew Eldritch’ sound alike on vocals and guitar, they also sported a female bassist, which always improves a bands appearance, and sound in Dammerung’s case with some great playing. There were a few more Goths in tonight than usual, and they looked very good, especially when they all danced together through the stronger songs in Dammerung’s set. I enjoyed most of their songs, though some were a little samey, but this could be because I haven’t heard them before, and it’s nice to have all corners of music on show at The Breeding Ground.

Carpet walked on next, to the delight of their ever-increasing fan base. There were a few technical hitches with the sound through their first few songs (sound desk Deja-Vu) and once they were happy, they showed off their talents, playing their own ‘US Grunge Rock’ style songs to a hungry crowd (still not sure about the Kurt Cobain vocals) with fantastic guitar playing and guitar effects, and style straight from ‘Rage Against The Machine’s’ back catalogue. This band look well rehearsed, and well gigged, and the three-piece are all excellent musicians. Nearing the end of their set, they played ‘Hot Dog Dance’ which is ZZ Top’s ‘Sharp Dressed Man’ with their own lyrics replacing the original, this is a superb cover (live with it Crud!) and shows again the talents this band possess.

Casino made their entrance and immediately caught the eye with their topless blood stained guitarist/bassist, and the vocalist, who had the face paints and appearance of Jaz Coleman (Killing Joke) and the dress sense of Trent Reznor (Nine Inch Nails). I was excited by the look of the band, and I was more than ready to hear them, when the vocalist announced in his stage character voice (imagine Rocky Balboa) “Yo, we’re Casino from Vicars Cross in (ear splitting scream) CHESTER!!!!!!!!!” they looked ready to start except for the bass player who didn’t have a jack lead for his bass. The vocalist screamed once more “WE NEED A GUITAR LEAD!!!!!” after a few seconds the sound guy went from the desk to the stage and asked over a microphone “can any of the other bands lend a jack to jack please” which was followed up by the vocalist screaming “JACK TO JAAAACK!!!” (A pure comedy moment I’ll never forget). Eventually, one turned up, and they started their fiercely paced set, and certainly got me going. I think if a band can create an interesting image, they’re half way to gaining the attention and interest of an audience. But this band have the sound as well, fast and furious with the vocalist rapping, chanting, and screaming his way through their set, with all the band throwing themselves around the stage like mad men. A couple of times, the bass player moved around so much, he pulled his ‘jack to jack’ out of his amp mid song, but this all added to one of the best shows I’ve seen at The Breeding Ground. A ‘Fred Durst’ look alike joined the band onstage for a couple of songs, one of which was called ‘Head Fuck’ in which he rapped and spat lyrics at the crazed, chaotic moshpit. For the last song, the front man invited everybody onto the stage, I watched the look of horror on the sound crew’s faces as 30 or so people joined the band and moshed with them, causing the bassist’s jack lead to pull out once more, though he just shrugged his shoulders and shared the front man’s mic for the rest of this finale. This band are pure Punk at its best, if you haven’t already seen them, then I strongly recommend you do. I hope we get them back at The Breeding Ground very soon.