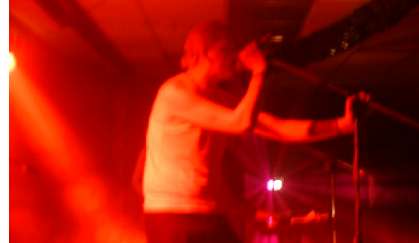 Any band that can induce vomit within you definitely has something about them I thought as I quickly made my way to the bogs to throw up a night’s intake of assorted lagers; ’Sorry, you can’t go in there, some arsehole has smashed up the toilets.’ said a doorman, so I swiftly headed outside & ensured the seagulls had a ready made breakfast in the morning.

I really did feel for Skinflick (above) tonight as vocalist Justin puts so much into his on stage presence but failed to emulate that dark exorcising menace you get out of a Skinflick CD. Partly because I think they need at least one extra guitarist & mainly tonight because the sound was pretty poor. It would be easy for everyone to blame the young soundman but he is learning his trade while his mentor sits at home awaiting payment, & it is a problem that needs to be addressed sooner rather than later.
So our dream of being aurally raped by Skinflick has been put on hold at least ‘til 15th March when they appear in Bangor. The clock is ticking down.

Town was unusually dead tonight (most people were at the Breeding Ground), Steve Sync, Wayne The Bastard, Andy Fatman & myself, gave the glass-eyed punk doorman called Mad Dog at The Dudley a resounding ‘fuck off’ when he tried to charge us a quid each to drink their beer. He let us in anyway fearing trouble when he noticed Steve’s extremely negative body language. What the doorman didn’t know was that Steve’s posture was due to diarrhoea challenging the dodgy anti-laxative tablet I gave him (Dr Crud). 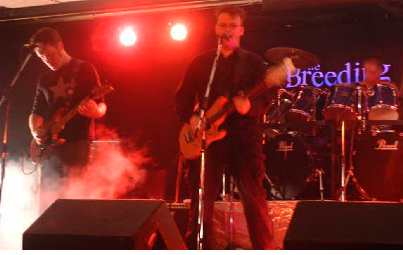 Flynch (above) opened up the fun & like Skinflick were probably unaware of the struggle with the sound as they ripped through their set. Feels Like Bliss received a collective nod of approval as did the excellent Lucky. Throw in Papa Roach for the kids & a rendition of Message in a Bottle that would have Pete Bethell reaching for his Bistro Police medley & the band said goodnight. Lucky is featured on the Kill your Management Vol 3 compilation CD on Psychophonic Recs.

Fatman endorsed the Lunatic Magnets DJ set & wants to go round to their house to finger their collection.