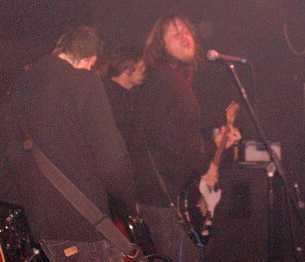 “There’s never a dull moment with this band…” muses Mr Crud on the way to “De Pool”. He’s not kidding either …… After putting the previous nights fracas at the Bluetones gig in Bangor behind them, the boys arrive at the venue to be told that they’re on at 8.30pm instead of the agreed 10.00pm slot. The initial heated exchange between band & promoter is resolved with “9.40 is de best I can doo for ya, la”. Happy with this, they decamp to savour the sights of nearby Slater St.

When the Crudster & I get there the mood is positively “up”, excited by forthcoming gigs, festivals & making the playlist on “Mark & Lard” on Monday. Spirits are slightly dampened when it’s explained that it’s a strict 30min set. Reluctantly, the boys discuss what to drop from the set…Bastards…it’s Fatmans favourite “Get Away”. Delayed by 20 minutes whilst support band Junk Culture casually clear their gear after overrunning their set, P.V hurry through their intro into a storming “Sell Your Friends”. “Through Your Day” still does it for me everytime, even though I’ve played it to death. The newest song “Why” is next, it’s the first time I’ve heard it, it’s a stomper and I can’t wait to hear a studio version. “Fall Away” is a thing of sheer beauty even Mrs Fatman thinks so (she has even threatened to turn up to see them, in a cropped P.V t-shirt & hot-pants…. oh no that’s me.) 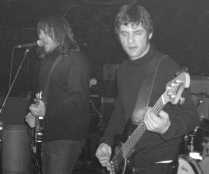 Desperate to fit in as much as possible into limited time, Chris survives a temperamental amp and grips those gathered with a crashing “Like You”, only to be given “Time Out!” by the promoter. Curiously they have only been playing for 25 minutes max. It’s obvious the lads are gutted but on reflection it’s not that bad: they played brilliantly, they sounded great and won some new friends/fans. Ever philosophical Yatesy tells it from the bands prospective: “It’s like reading a book and not being allowed to finish the last couple of chapters.” or as Mr Crud(e) would put it “It’s like having a wank and not being allowed to come”.

I’m glad I’m not going home in their fucking van !