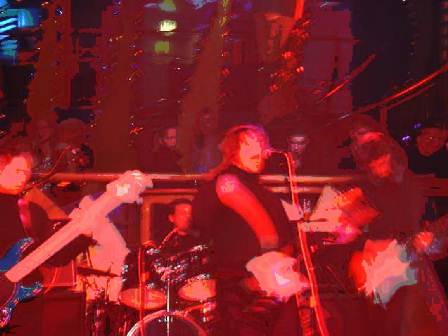 I braved the cold weather to accompany Neil Crud to a warm up gig in Betws-y-Coed of the soon to be legendary Pocket Venus. Known for its bikers gatherings, the Swallow Falls ought to have been a sure fire bet for this band! On arrival the DJ was playing songs from the early 90s & the teenage girls (more 13-teen than 19-teen!) thought they were dancing to today’s bland pop music – such is the wierdness of deepest Wales.

The girls danced; Pocket Venus sound checked; the girls retreated to the bar. By 10.15pm Chris Yates & company had started their uncompromising noise fest. However their music was alien to the aforementioned girls (& a few boys) & when 2 became brave enough to get & dance, Yates applauded them for their ‘fucking effort’ & began his usual crowd baiting.
I’ve only seen PV 2 or 3 times but tonight’s set was like a greatest hits event. Notably due to indifference from the audience, Yates changed Like You to Fuck You. My girlfriend thought it was a tribute to 4Q, it wasn’t, he was just pissed off with an odd crowd, although they do perform better when they’re annoyed. I was more than impressed by the sheer audacity of the new song Sell Your Friends so much so that I’ve taken their advice & sold Mr Crud to the highest bidder.

They ended on a high with How High, Crud said they were going to drop it from their set. My advice is – don’t or there’ll be trouble!