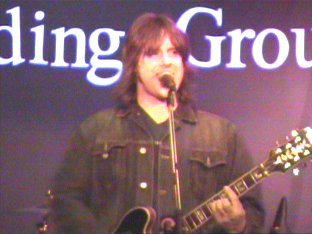 The void had been a long & dark one & the break had been a welcome one. With a show every 2 weeks the Breeding Ground supply was out stripping the demand & the head count was falling. Now billed as ‘specials’ the novelty of a big event in town attracts enough people east to this venue.

They say Indian food has hallucinogenic values & one consumed in the evening leads to having bizarre dreams. This statement is very true, for having had a birthday fly agaric madras last Thursday I have still yet to come down, & the cocktail of Bud, Carling, Guinness & Fosters (flat, of course) only whipped the hallucinogenic qualities up. So I didn’t really get showered in glass on the minibus home when someone angered by not being let on threw his pint glass hard enough to break a window. I also didn’t really see a packed out Breeding Ground with all the seats taken, queues at the bar & the dancefloor full. Nice one. 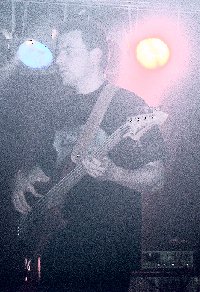 Before stepping through the gateway into alcoholic madras induced oblivion Fatman challenged me to describe each of tonight’s bands with one sentence.

Carbon Atom – much better than last time but died on their feet when the crowd ignored them.

Pocket Venus – top performance with memorable songs but the shine was taken off by sound problems.

What was to be a big night out whittled down to a three-some as the other flies got caught in their respected webs. Steve Sync had his pelvis screwed to a cake stand and Dewi Gwyn having suffered a near death experience 6 weeks ago (he was watching Sesiwn Hwyr on S4C) found his car had belatedly come out in sympathy. So it was left to Andy Fatman, Wayne The Bastard & my good self to fly the Flag of Crud & discuss the points of tonight’s event.

At The Dudley I managed to off load a couple of the excess tickets onto White Trash & Blondie at the expense of escorting them to The Bistro to buy them Malibu & Cocaine. Bizarre. Even more bizarre is standing next to fruit machines at the place that was once the epitome of the local alternative scene.
The Breeding Ground was packed out even by our early arrival & Dusty Moo had the bouncers on the door nodding in appreciation of his acoustic set & nice new haircut. 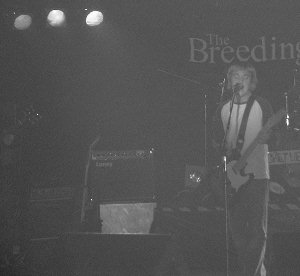 With the Fosters as flat as Twiggy’s chest we’ve discovered the Guinness is pushing for promotion to the Melinda Messenger league so Fatman, Wayne & I discussed the pros & cons of Pocket Venus & Nutonic. The Llandulas boys exiled in London have a Mansun look about them & a very rock orientated sound. The stage presence although staged is one of total confidence & shows pedigree from countless performances. And, as previously said; I can’t remember any of their songs, there’s no hook line or melody that stands out so they’re a ‘grower’ band. As a live act they have that spontaneous feel, that capture a moment now for it will be gone the next.

Pocket Venus on the other hand lay the pressure on front man Chris Yates to visually run the show whereas if the rest of them gave a little more it would complete the picture. Steve Allan Jones making a special visit to see them tonight said it, as did Infectious Records last Thursday in London. Their songs though can be hummed the next day as there is a natural source of writing that hook line & no stinkers.

If the 2 bands took lessons off each other they’d have the area sewn up, but they both have far more complicated knitting patterns in their sights, with Nutonic backed up & based in London & Pocket Venus about to launch an EP into world-wide waters. So hopefully both can return to the Breeding Ground with enough money to buy a poor reviewer a pint of something from the Jordan premier league of beers & perhaps form a super-group, Pocket Nutonic? Nutonic Venus?

Carbon Atom have worked hard on their 2nd CD Restart & it shows, The Levellers residue has nearly been wiped clean to leave a much brighter spacey feel. Unfortunately the odds were stacked up against them tonight with 2 halves of the audience here to see the other 2 bands & in no mood to be entertained by anyone else. Throw in a dodgy guitar lead & you’ll cut your set short & head back to Liverpool with your confidence in tatters until Emile Heskey puts you 2 points clear at the top of the table the following day.

Having not realised that Fatman had picked up on some of my smuggling techniques & managed to sneak a whole bottle of Gin inside his stomach, I gave him my camera to get some choice snaps of Pocket Venus. Loading them up tonight I had a pretty decent breast fest but none of the band. Never mind (the bollocks).