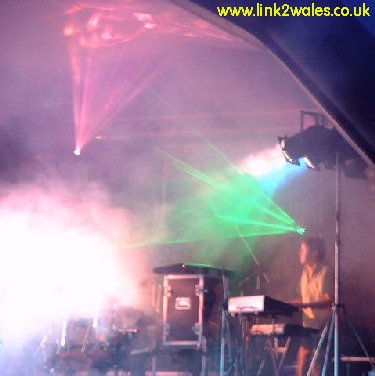 I was disappointed to have missed a rocking Friday night, but with the weather just holding off, Saturday wasn’t a let down. This part time reviewing lark has now got to a stage where I am sometimes conscious about what I actually write. As I sat gassing in the field to the prodigy son Nick Grover I glanced in to the crowd & noticed Grasshopper all sat in a row & momentarily thought; ‘Oh shit, did I slag them off in my last review?’ The fear passed quickly, hopefully most bands with any intelligence will respect the fact that I’m prepared to say it like I see it, rather than give a local press type Next Big Thing review. 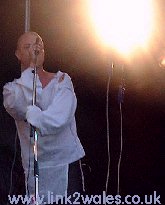 So it is with hope I don’t have to avoid Strait Jacket (left) on my next visit to Denbigh They have the style, they have the charisma, they have the look (in fact, drummer Chris Grover looks so cool you’d swear he’s just stepped out of a fridge). In their singer, I’ll call him the Grolsch Man (thanx for the drink!); they have the natural front man, at ease with himself & his audience. The type of vocalist most guitarists, bassists & drummers yearn for. Where it goes horribly wrong for Strait Jacket is their original material, err… there isn’t any. Like their Denbigh predecessors, Wild Weasel, Strait Jacket are on the road to local hero status & the tarmac is still steaming. What a band of such obvious talent needs to do is ensure they become anti-heroes. Like I said; they have it all & it’s fine being rabble rousers for events like Pigstock where you’re guaranteed a raucous response, but take a set like that beyond the safety of Denbigh’s borders & the reaction will be very different. I normally wouldn’t spend this long on a band at a festival but I’d just like to stress the importance of original material to a band of such capabilities. Take a leaf out of Fudged’s scrap book (who opened proceedings on Friday) & start replacing covers gradually with your own material. So I expect you to buy Primal Scream’s XTRMNTR 2000 LP & play it alongside Never Mind The Bollocks, drink a bottle of Bub’s Homebrew & start songwriting. I want the results on my desk by Monday morning.

There was something not quite right; due to driving restrictions I was chastised to the consumption of Coca-Cola, & on buying a pint of the said teeth rotting liquid I was stunned. ’60p please.’
Shurely shome mishtake, you don’t set up a stall at a festival & only charge 60p for a pint of coke. Thankfully the town’s traders haven’t cottoned onto the word ‘inflation’ at festivals yet (let’s hope they don’t). Some tosser tried to charge me a fiver for an ice-cream at V2000 last year; he was left with it dripping down his arm as I walked away in disgust. Here you could endure a cheeseburger & can of pop for £2.60, which can’t be bad.

Having missed Fudged, Big Business, K’aenobi, Giro Gypsies, Keaf & Y Moniars the night before I collected eyewitness accounts, all with the same result; ‘What a night!’ With a self-imposed 11pm curfew, the festivities ran on ‘til 12.45am. It must’ve been a good night as a couple of relatives of mine finally dragged themselves from their hungover slumber to get here by 7.30pm having suffered from an incoming tide of beer last night. When I say ‘relatives’ I should be more precise in a town which bears a family tree that is one straight line.

Having warmed her fretboard at Llandudno’s Buzz Club the previous Wednesday, 5’ nothing Emily Gresham calmed things down with an acoustic solo set to much appreciation. I anticipated the worst as the black clouds poised over the event all day finally teetered over the edge & gave a scant warning of possible things to come. Watching Supergrass last year I saw 8,000 people desert the band like rats off a sinking ship when the heavens opened. Here it’s obvious Pigstock has more staying power; with an alcoholic force-field protecting the revellers from the shower there was no need to heed Bob Dylan’s advice & seek shelter from the storm.

Spotting an old school friend, Mark, we watched Carbonari to see how their sound would carry. It didn’t carry that well to the back of the site, not a reflection on the band as Mark did remark [sic] that last year it was loud enough to hear from his house, whereas this year we could converse without shouting from where we stood. Chris White (not being assaulted by bands today) watching things from closer proximity said the sound was excellent from the 3-piece & as they’re serious musicians they just now need to find a level on stage at which to communicate with the audience. I suppose he’s right, but that’ll come with more gigs under their studded belts (The Barfly in Cardiff – see gig guide). It was good to hear new material such as X Rated which’ll hopefully find its way onto their inevitable critically acclaimed debut LP.

The mix of emotions being a festival organiser must be quite a hit – you want to enjoy yourself but can’t relax. You’re getting that buzz of ‘I did all this,’ but at the same time worrying in case it all goes horribly wrong. So when a scuffle breaks out you fear the worst that all hell could let loose. Thankfully it was only a couple bringing a domestic argument out from the confines of their home & into the arena. Maybe a Domestic Tent could be set up for next year? Anyway hats, baseball caps & toupees off to John Evans & his troops for another top year, even the pissing rain at the end didn’t dampen the squibs enough to snuff out a magnificent fireworks display. 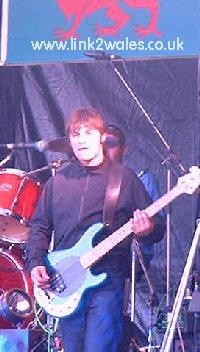 ‘Neil, if you produce the single, we’ll record it live in one night & mix it on another.’ Six weeks on & we’re still leaning over the mixing desk & Pocket Venus (bassist, Naldo pictured right) have lived in my pocket since then. So a write up on them can be either biased or over critical, but in fact, this is what it’s at. It takes a lot to win an audience over with original material & 30 minutes allocated time. So after opening with a new song that blasts straight into the chorus before playing the once crowd pleasing but now honed Rollercoaster (& better for it), the crowd had to be coaxed into cheering. The denim clad Chris Yates couldn’t resist a ‘Hello Denbigh.’
I’m still not convinced the slow acoustic numbers work in the set back to back & someone mentioned that Pocket Venus are one step away from a Coldplay formula, where the songs are polished ballads in the studio & the band go mental on stage. Those watching were won over when Ginger was dedicated to Chris’ daughter & he asked everyone to stare at her; the ice at this point had not only been broken, it had melted a hole in the clouds to give us the only sun of the afternoon. Like You set the tone & the heads started nodding & How High, a 7 minute hypnotic blast of epic proportions convinced Pigstock that it was £4,000 well spent (whoops! shouldn’t have mentioned that!). When you draw blood from breaking your guitar strings in a frenzy you know you’ve had a good gig.

The bunting draped all over the town also signalled the start of the National Eisteddfod. The thought of 170,000 Welsh people converging on a town that is almost a self proclaimed republic might have serious implications. Denbigh is a town where they beat each other up over a beer in practise for when outsiders turn up, so you can only anticipate the ructions when thousands of Welsh youths leave the confines of their tents & venture out into the badlands. Maybe the 2am beer tent & proposed foam party on the Eisteddfod field will keep the factions at opposite ends of the town.

Mahoney perhaps show you cultural divide doesn’t exist outside the people’s republic. From Leeds, they boast Welsh speaking ex-Fluff guitarist Gareth John. (Un)oddly enough Mahoney sound just like every other band from that part of the world that has played recently in North Wales – Lapdog, Find, Bighead, Cardinals & now Mahoney all sound the same; yes, they all sound good & have great songs, but sound the same all the same. Perhaps it’s a cunning plan by a band to get as many gigs in the area as possible by changing their name! 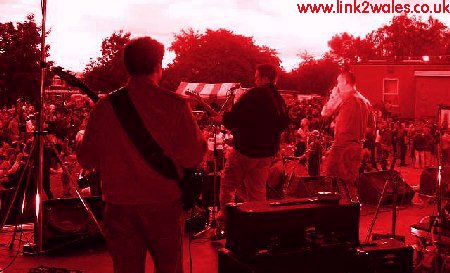 Oh no, not a bloody ska band, I thought – still scarred [sic] from The Specials, Madness, Selector etc of 20 odd years ago when I was a young punk rocker tussling with the labels, genres & school colleagues of the time. Punk, mod, ska, teddy boys, heavy metal & I didn’t want to be reminded. However the memories Caban (above) rekindled were fond ones & soon my head was nodding in unison with those around me who were skanking to the exquisite sound the South Walian outfit gave us. Back by popular demand the programme boasted; Caban ensured they’d be contacted in anticipation of next year.

I was offered some F’s by a dyslexic pusher 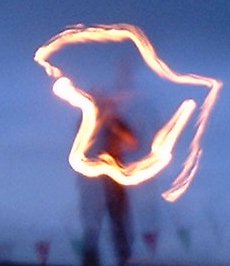 The same can be said for the Cargo Cult Sound System (main pic) that could set a precedent for future years as the night closed in & crowd doubled to more than 3,000. CCSS lifted the spirits of the age with their transient pulsing hypnodance rhythms coupled with a spectacular fire juggling show & lasers.
With 700 gigs under their belts Levellers clones the Bleeding Hearts would find it hard to fail to impress. They didn’t fail & they did impress. Just like this event does every year, it’s only a great pity that every month can’t be August.

I felt for the Goodfellas as I drove to the Breeding Ground in Rhyl for another engagement, the heavens opened in earnest, but it’s certain those who got wet were warmed for another 12 months.