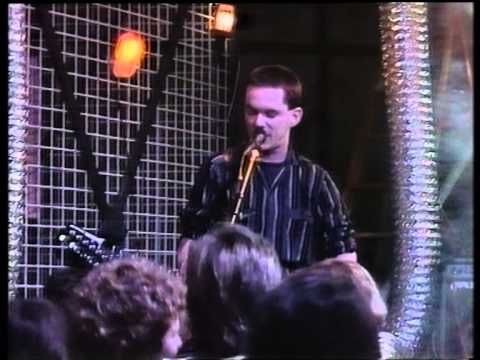 My head was stooped over The Independent on Sunday trying to decipher the words; I bought the paper to take advantage of the free Nick Cave CD given away with it. Fairziff & myself were in disagreement over the Australian necro-crooner; Fairziff can’t understand what the fuss is about, whereas I rate the LP Kicking Against The Pricks amongst the very best. Andy Fatman would go one further & probably admit to swapping spit with Mr Cave. Regardless of all this my point is that the free CD summed up my feelings this morning, I had a stonking hangover & the music softly massaged my throbbing head (oo-er) as I came to terms with my ailment.

It had all started so well, Wayne the Bastard & I devoured a mega Armageddon death burger from Gino’s before wiping the blood off our lips & meeting up with old vegetarian acquaintances in The Lorne at 8.30pm. Those being Rhys & Sion of Mangre, formerly of Anhrefn. Growing older is a funny thing, in the old days it would’ve been customary to at least empty a full ashtray over Sion’s head before washing it off with his own pint of lager. Then after scrawling ‘Anhrefn are wankers’ on the toilet wall, I’d have swung one of the band round by his ankles until he screamed for mercy. Of course you grow up & instead you talk about the new Ikea catalogue or Russell Grant’s gastronomic habits & hope no one writes about it (whoops!).
One thing that did come up in conversation however was the fate of a famous microphone; in 1987 – Cumi Pants & myself went with Anhrefn to watch them play in Bootle. We’d raided the off licence before they picked us up so by the time the Welsh punks were on stage, Cumi & myself were trolleyed. The song Action Man began & I jumped up to relieve Sion of his vocal duties & proceeded to make a complete tit of myself, dropping my pants I firmly lodged the microphone between my arse cheeks & aroused the audience with my perfect physique & sphincter control. That very microphone is still in circulation today & over the years has been used (unwashed) by Cerys of Catatonia, Gruff of Super Furries, Big Leaves, Melys etc.

That show will always be remembered by 200 scousers who saw it & like I mentioned last week, bands need to offer something visually on stage, like tonight’s Sulphur, Snibglider & Mangre. They all play pretty decent stuff in their own fields of joy, from Sulphur’s brand of punk rock, Snibglider’s guitar indie to Mangre’s dirty rock’n’roll.

Now Mangre by their own admission have nothing to prove & nothing to gain; as Anhrefn they’ve been there, done that & shagged the girl behind the T-shirt stall. They’re too old to get signed & the music doesn’t quite hit it off with the young audience, which leaves them in a purgatorial state of a band in search of an audience, but they don’t care, they do it now for their own kicks & will invent an audience. The girl singers accompanying Sion’s vocal are supposed to create a bit of soul but as one was making her debut tonight I’ll leave deliberation until next time.

After a quick felch in the gents with Dave Hughes & a hamster I stumbled into Dean Obscene who I had the misfortune of playing with in the Psycho Sexual Sex Terrestrials (PSST). As there was no Football Focus this morning I used that spare hour to watch a PSST live video, shot at The Mermaid in Rhyl in 1992. Like the 4Q shows that preceded them, PSST gigs were full of raw energy & that video epitomised it perfectly, the audience were crazy & the band was madder still, it was a show, a performance, an event. The band were there to entertain, we knew our musical capabilities were limited & me & Dean agreed that that was probably the reason why those shows were total frenzied affairs. The set-up would have road cones, banners, live chess players, poems, & crap drum solos when we would drop our guitars & leg it out of the venue. It was great fun & memorable, it was inevitable that it wouldn’t last & fell apart when we started taking ourselves seriously.

The whole point of this review is a message, not only to Sulphur & Snibglider but also to all the bands that play the Breeding Ground. You are all very talented & far superior to the racket we used to make, but you’re all so talented that there is very little to distinguish you from the rest. All I have to remember last night by is this steaming hangover brewed by warm Fosters whereas I should be sitting here remembering an event rather than a gig.