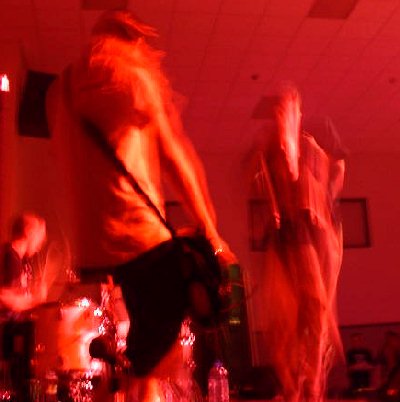 It’s been a strange couple of weeks LATBG (Life After The Breeding Ground), lost souls calling The Samaritans, not knowing how to carry on. A special helpline has been set up to aid those suffering from the loss & trauma. The Rastin suggests TBGs closure is a stimulus the area needs as bands were getting lazy & becoming cocooned in Breeding Ground circles, not breaking anywhere else in fear of rejection, or through fear of having to organise something themselves. Now in the era of LATBG the big bad world once again beckons the bands who will have to work that little bit harder to achieve their aims.

One band who have grown up independent of TBG clique are Rhos-on Sea’s Out of Use (pic above), who are more in tandem with the still vibrant Nwest underground punk scene than with the nu-punk happening in Rhyl & Bangor. I mentioned to a couple of people that I was going to see them tonight, one said: ‘They’re shit.’ And the other said in a derogatory tone that they had merely sped up their songs. It’s safe to say members of other bands passed these comments, & it’s good to see that the 2 faces of the local scene are still alive & spitting.

Out of Use were the 2nd of tonight’s 3 bands, I had seen them a couple of years ago at the West Shore Social playing with Alien Matter. I don’t recall anything from that performance, but I was struck tonight by the sheer energy & enthusiasm of a shed load of songs each barely 2 minutes long. The organisers I feel were being a little ambitious using such a large venue (the Manics played here last month) & the atmosphere would’ve been far warmer in the room downstairs. Still, it meant we didn’t have to wait too long to be served at the bar, although Andy Fatman did shock the populace by refining his Carling intake to a paltry 5 pints.
I keep trying to find new adjectives to describe a really tight band; Steve Sync when its his round is always a favourite (there’s nothing tighter than that), so Out of Use are tighter than Steve Sync when its his turn in a round with 12 mates & it’s the day before pay day & his missus has been on a shopping frenzy. To play songs this fast you need the stamina of Paula Radcliffe & a wank sack full of amphetamines as songs like Just Forget It & Lack of… were hammered out without faltering. Some kid’s T-shirt read ‘Out of Use – Hardcore Punk’. Nuff said. 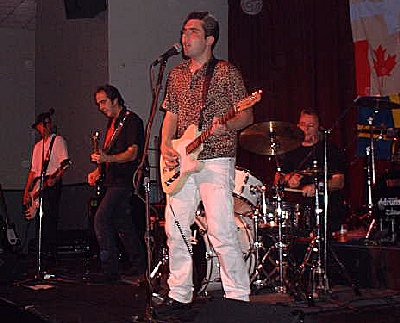 By contrast, Liverpool’s 0898 (pic above) were messy & untogether, which suited their opening set down to the ground. Old enough to be the parents of Out of Use these old-good-timers look suspiciously like the Go-Heads crew who I 1st encountered at L’pool’s Planet X when I was a 21 year old guitarist with 4Q. Like their loyal following who they have grown up with, slept with, fought with & probably married & divorced with 0898 take the spirit of punk for what it really was; to have a good time. The old school music with a pinch of new college zeal is mixed into a bundle of raw tunes like I Want You that have been lifted straight out of a Ramones songbook. It was fitting that they had written a new song as a tribute to the late Joey Ramone, & the opening line of: ‘I remember the day you passed away..gabba gabba hey.’ Had me in 2 minds, do I reach for the box of tissues or look for a sick bucket? Nevertheless, the song progressed into the most un-Ramones tune in their set & probably their best. Throw in a top notch version of 999’s Homicide, a Ringo Starr Thomas The Tank impression, an on stage argument & a plethora of technical difficulties & you have the perfect punk rock set.

Joe Strummer & Mick Jones have always refused to reform The Clash & quite rightly so. They don’t need the money & it would’ve been a joke, I may have thought differently had I not seen them on the London Calling Tour at Deeside Leisure Centre. So you can look at a tribute band in a couple of ways – you pop along to reminisce over old times, get drunk & have a laugh like the Go-Heads crew. Or you could cry into your fistful of flyers like I, & a lot of others did at the travesty unfolding on stage before us.
Imagine Bjorn Again if their version of ABBA’s blonde singer had been a Jamaican 6’5″ male body builder? It wouldn’t have worked. I assume a tribute band is there to be a copycat of the real thing (Bootleg Beatles anyone?). Black Market Clash’s (pic below) version of Joe Strummer had certainly studied Clash videos & sounded the part, but looked like Mick Jones. The Mick Jones-u-like looked as if he had been recruited from Devo. The excellent bassist was the spit of Half Man Half Biscuit’s front man & the drummer was a stand in (Topper Headon must’ve been on a drugs charge). 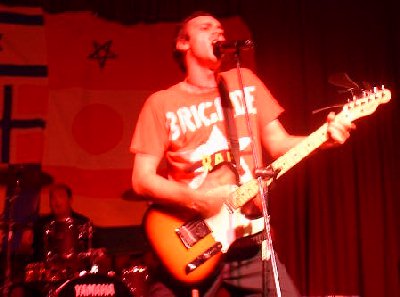 I’m sorry but I really did mind the bollocks tonight, for that is what I saw – a load of bollocks. Apart from a half-decent bash at Julie’s Been Working For The Drug Squad, Straight To Hell & White Man. The rest of the set was a mistimed, miscued, mishmash of class songs so badly performed that Black Market Clash should count themselves lucky that it isn’t yet a capital offence to murder the work of other people. If you play Complete Control or Tommy Gun at home that sheer force that made The Clash a superpower amongst punk bands hits you. Listening to those same songs performed tonight it was like being slapped in the face by Dale Winton.

I remember The Clash turning up & busking outside a gig by The Alarm as they weren’t too happy about the similar style of the band & I do hear that Dave Gilmour approves of & goes to see Think Floyd live. I’m certain Joe Strummer would sue Black Market Clash for defamation of character.