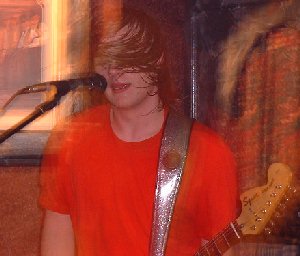 I’ve got a good business plan; I’ll charge a band £30 to hire a room, pay ½ of it to the barmaid & keep the £350 bar takings. There again, I’m a nice person & won’t charge the band, which is what the New Inn should do considering there was no one downstairs in the ‘normal’ bar tonight.
Carpet, for some reason decided to make it a gig a fortnight in Rhyl on the run up to xmas, this is their 2nd installment – be sure to see them week after next at the Breeding Ground with Fudged & Black Swans. I thought at 1st they had taken up a New Inn residency, then perhaps they wanted to make amends for a below par performance last time (they did make up for that). Or maybe they were eager to demonstrate that the Carpet merchandising bandwagon has rolled into town. New CD £3.50, T-shirt £5. Bands take note – people will listen to your stuff at home & advertise you on their chest, but only if you’ve got it to sell in the 1st place.

They were apparently smashed tonight, but playing wise you’d never notice. Carpet are the Dalglish & Rush of punk rock – they have a level of telepathy so astute that they know exactly what the other is going to do & in what key. While George Harrison’s guitar is the only thing with a long neck that isn’t going to get plucked this christmas, John Morris’ (above) geetar got its customary fucking this evening. Drummer Hargi was being praised by fellow drummers (& quite rightly so). Julian Jesus was quite simply off his tits & still managed to play his bass tighter than Steve Sync when it comes round to dishing out custard creams at coffee time. Hey, & we even got a trashing of the kit after the superb ZZ Top pisstake, Hot Dog Man. 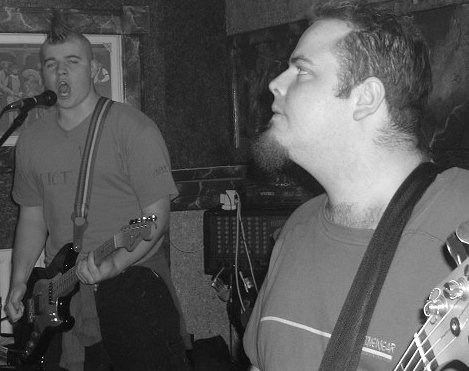 They do look the part, 2 mohicaned guitarist/vocalists flanking a Bob Mould lookalike bassist, who won’t look you in the eye but has the potential to wrap his bass around your head if you upset him. And the multi-talented Jamie Cardno whose snare drum was taking such a beating that it was begging for forgiveness by the end of the ½ hour set.

Looking around the packed room I wondered how much longer this scene will survive & thought about the Bistro scene that all but died 10 years ago. The bulk of the people from those Bistro days have now faded into the suburban bliss of mortgages & children. So I concluded that this thriving local music scene will last for as long as the girls involved don’t get pregnant.
I’m just off to the wholesalers to buy some rubber johnnies.