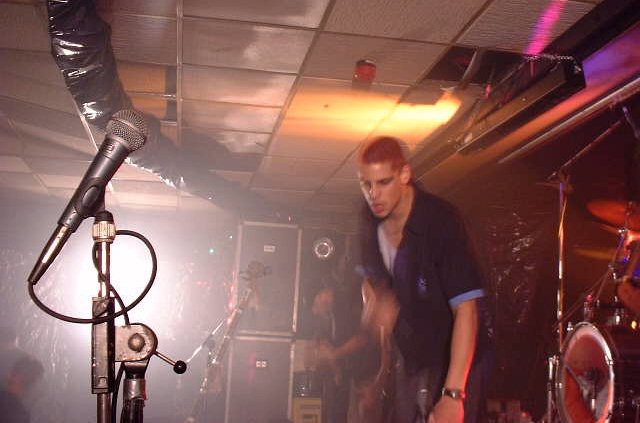 There’s still plenty of rabbits left in the hat. If you had taken the Internet message boards at face value they had broadcast nothing but doom & gloom for this venue. Since the last gig they have banned under 18s after one of them tried to get home through a stranger’s house having supped the wrong stuff at the Breeding Ground (allegedly). With the CID monitoring the venue because of this incident & under-age drinking everyone had said they’re going to The Dudley tonight, to be fair to the venue under age drinking has never been an issue as the tables occupied by the pre-adults were always drink free.

So myself & Wayne The Bastard expected an empty house – much to our delight this was far from the case, the only thing that had changed was that these youngsters more suited to the excellent MASE events were not there to play ‘tip-on’ having been turned away at the door.

Curious as to the hype, myself & the illegitimate one stopped off at The Dudley, a pub once called The Load of Mischief, a bikers haven in the 70s & 80s where you could get any part for any bike. Welcome to the 2001 Mutant Oddity – a cosy Dickinson pub with quaint porcelain figurines in need of a dust next to a Marilyn Mansun framed poster & full of mutant punks – the majority of whom never seen at TBG. It is like a subculture that has developed away from the main glare of society, full of PVC & piercings & hardcore punk blasting out from behind a curtain, shrouding an exclusive dark & smoky room. An adjacent room had the karaoke queens in pink dreadlocks & leather bras murdering the B52’s Love Shack. A superb place free from the oppressive nature that can be found in Rhyl’s other pubs & a guaranteed Trendy Free Zone, it’s only a pity the clientele don’t make the trek up to TBG as tonight in particular they’d have something to scrawl home about.

’We’re gonna open up with something different tonight.’ Announced Paul Hammond as water dripped on him from a hole in the roof above the DJ box.

Enter Mark Moonan (aka Dusty Moo), having split Babakin up this week & joined PSST. The thought of an acoustic guitar set at a punk gig could have you anticipating flying bottles & Mark was visibly nervous. Much to his delight & astonishment his short set was warmly received by all & sundry. Although we’d better not let it out that he played Come Up & See (Make Me Slime) or we’ll have Stuart Tong & the Rhuddlan Folk Club putting in an appearance complete with candles on every table & Arran cardigans!

With fit mums present (hey, it’s my age!) the very young Flea Cirkus made their debut, again to much appraise as it seems this older breed of Breeding Ground punter (albeit by a couple of years) is here to watch the music rather than play Derry 123. The obligatory Offspring & Blink 182 covers blanketed a raw set with only a couple of original numbers (the one near the end was v.good). It was a set of inspired chaos & like I said in the MASE review last Monday, these bands are the next wave, fed on a diet of American punk that they use as a platform of influence & gradually mature musically. It’s that maturity that can take the edge off a band (see the histories of 4Q & Psycho Sexual Sex Terrestrials) – the out of time drumbeats, chaotic endings, guitars coming in at the wrong place, all added to the Flea Cirkus before us. Take that away, & it will go away the more they play together, & you could be taking away the very thing that makes this band worthy of more people paying to see them.

I have to say that the beer in this place is fucking awful. For £2.20 a pint you expect at least a bit of life from your tipple, instead I’ve invited Fosters to the funeral of the tepid pint I was poured as it was as dead as an Aussie soap story-line. I’ve also heard on the grapevine that Alcoholics Anonymous have enlisted this place as a therapy centre; one pint of this stuff & you’ll give up the ale forever.

Earlier in the day I had grown gills & fins & visited the Miri Madog Festival in Porthmadog. Arriving there to see Quidest finish a mostly harmless set on the Radio Cymru stage it was evident that the weather was going to play a major part in determining the success of this excellent idea. The rain was at times horizontal, which meant covering the PA with bin liners & one time rock star turned toilet cleaner, Sion Sebon (ex-Anhrefn, Mangre) put his skills to good use & mopped the stage in between bands (left). Conditions were much better inside the huge marquee, capable of holding 1,000 plus, a disappointing 60-70 watched a Cardiff band Sammo Hung with a colourful female singer & very loud guitars. What is noticeable about these & the very good Carlotta playing simultaneously outside in the rain is that they differ from their English counterparts & better for it. It’s well documented on this site that I find a lot of indie bands from over the border all tread the same old boards & play the same old chords. Whereas here, isolation; not from the music, but from playing amongst others has created a slightly different sub-style.

With the rain trickling down my back we went to town for some lunch & the Crudlets who begged me to take them home out voted me 2-1. I only hope the weather eased off through the day & increased the numbers present.

Back at TBG, Anglesey’s Fubar are fucked up beyond all recognition – if they came from the West side of the States they’d be hailed as awesome & fantastically mind-blowing (which they are) by the press darlings. With a style similar to that of Senser (without the crappy girl singer) jacking up a drug cocktail of pure amphetamine, cyanide & Vim, Fubar should bottle their on stage aggression & sell it for profit. From the inspired chaos of Flea Cirkus to the intense chaos of Fubar, all the seats were empty in the house as everyone surged forward to soak up this sonic boom. I was happy to let my ears bleed as my head was blown off by this nu-scrap-metal-drunk-punk call it what you like onslaught of unbridled hate filled noize.

My only regret is not having enough money to sign all these bands at once & release the stuff you deserve to hear, instead I have to do it one at a time. Release #4 coming soon.