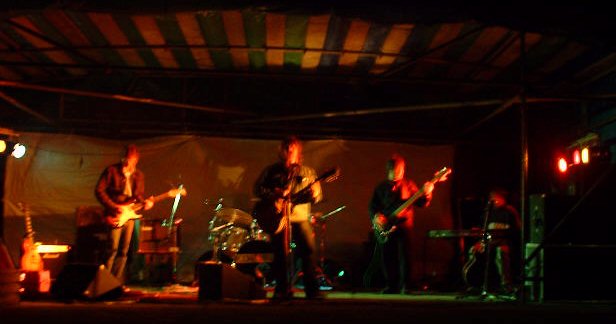 For an evening in early August it was pretty cold, I wondered why there was a brass monkey wandering around this historic town looking for his balls, so praise be to Pocket Venus for warming up the Conwy Festival go-ers on the quay. 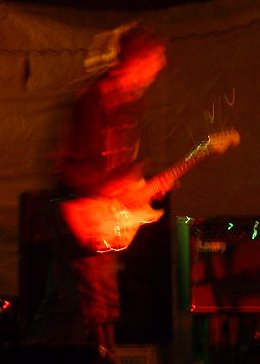 What a great idea; set up a canopy with a PA & lights next to the Liverpool Arms right on the seafront of this picturesque setting & put a couple of bands on every night during festival week. In the past it was the Civic Hall in Conwy that played host to such evenings, which were always hit’n’miss. People didn’t like paying to get in & the beer was from cans at room temperature. Here in the 21st century you have a small but adequately staffed & stocked bar, no admission fee, the pub does a roaring trade & the bands are guaranteed a decent audience.

Festival hopping Venus style – not exactly Glastonbury to Reading, that’s to come next year – but from Pigstock to Conwy; both prestigious in their own rights. With Wayne The Bastard in tow, I had a good barometer to gauge how far Pocket Venus have progressed since those very very dark Supermania days. Having not seen them before WTB’s assessment was they began in a progressive rock style heavily leaning on Pink Floyd before mutating the set into a blinding finale

At Pigstock, guitarist Steve was just in ear-shot, here in Conwy he shot my ears with a top notch performance. They had tonight Matthew let him off his leash & if we were postmen he’d have bit the ankles of each & every one of us (it’s something they put in the Llandyrnog cheese!).

You know that Steve (pic) will never play the same thing twice as he lay his instrument on the stage, took out a revolver, pointed it at the guitar & told it to dance. What a mover!

The band, ever so conscious of their actual playing remarked on a catalogue of mistakes they made. Whereas playing a duff note or a miss-timed chord will linger for an eternity on stage, off stage, if noticed, it’s gone in a flash. It doesn’t matter & in fact adds that bit extra & proves the band are actually human in this awful age of sequenced drums, sequenced synths, sequenced guitars, sequenced dancing & no doubt sequenced dressing room groupie sex. I used to follow The Damned as a spotty teenager & in their earlier wild days, each gig was a chaotic affair. That element of surprise always lingered over their set. Through the years, particularly after the Top 3 hit Eloise they became so polished you couldn’t distinguish between them & their records. I stopped going to their shows, there was no point, as they were highly professional & very boring. Which is why it is important for bands like PV to continue to leave that rough diamond edge to their live performances & let the studio recording show every intricate detail of songwriting & productive prowess.

Songs that make every receding hair on my head stand on end are few & far between. That chord change half way through Catatonia’s Road Rage was the last one to do it for me until the follicles were again aroused on hearing the live performance of the forthcoming Pocket Venus single Shadow of Doubt.

There is not a shadow of doubt that the same will happen to you when it’s released.