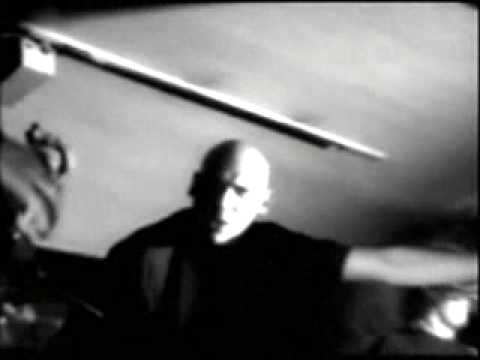 “So which way is it”, I asked. “Just follow the A5 ” she said. Not a great start to yet another adventure, following the diesel-crazed exploits of Rhyl’s favourite, if not only, space age throb rock Sextet. If the Sons had been playing the Shamrock Arms in Holyhead, then this well rehearsed piece of map reading skill would have been the best advice since Neil said “…..and mine’s her mother”.

As it was, we were heading for The Bonding Warehouse in York tonight. So after a shaky start, Neil Crud’s sister, and myself Emma, eventually found our digs in York. After checking out the town planner, we realised we were only 2 minutes from the venue. So with our newfound navigating confidence, we decided that it would be cool to turn up at the gig late. Our thought was to arrive at the gig, to walk past the bulging queue, to push aside the door with the “Sold Out” poster on it and to announce our entrance to ‘Jeff Guest-List’. When we finally arrived, Jeff was indeed there to let us in.

He said, “…so you must be Mike and Emma” as we enquired as to whether we would be spared the £8.00 entrance fee. We must have come in the side entrance as both myself nor Emma can not actually remember seeing the large queue or the sold out poster. Mind you, we were pretty pissed by this stage. We arrived to see the Sons just finishing their sound check. It all looked pretty serious stuff, so we didn’t intervene, we just watched for a while. Steve Sync seemed agitated; he was forever making his usual request of ‘…up just another notch’ to the sound engineer. I say engineer, although I have my doubt’s as to whether he was in fact a qualified engineer or just the bass player from Blyth Power, the headline act. Bonehead looked as confident as ever. If Slash ever gives it all up due to cigarette induced facial burns, then Bonehead would be on the plane to New York faster than you could say the words “Thank you, goodnight Phoenix.” And rightly so! Martin was moving around the stage casually, he appeared to be the most un-affected member of the band. You would have sworn blind that he was just looking for a mate at a primary school disco. The concentration showed on Cumi’s face. His concern about the sound quality of the new click track he had to play to was clearly showing. Then there was Chris, his first outing with the Sons, coming in as replacement for ex-bassist, the talented ice-cream salesman, Antonio Parisello. Toni was obviously going to be a tough act to follow, and I could sense that Chris was feeling the pressure. Neil, however, looked his usual menacing self. He was definitely in control. He was keeping himself to himself, only occasionally checking how the others were getting on. Confidence seemed to be his middle name, and I think the others picked up on his positive and confident attitude.

As for the gig itself, well I don’t remember too much about it. Not through drink but due to Neil insisting that I record the event on VCR. Of what I do recall though, the highlights for me were the increasingly harmonious ‘Our Glass’, a song that just seems to grow and grow. The ever spine tingling ‘Of The First Water’, and, just for the initial looks on the Blyth Power’s fans faces ‘Anxiety’. Emma’s favourite bit, apart from actually finding the hotel, was the adrenaline rush she experienced when Neil sat down next to her during the instrumental break in ‘For Want Of A Better Name.’ She said later that “ I just felt so important, everyone was looking at me.” Bless her. The large crowd seemed to take to the Son’s set. After the initial poor sound quality, due to an absent, incompetent sound engineer/average bassist, and after the shock of not hearing “Wu-Oh-Ho” sung after every lyric (a la Blyth Power), the audience seemed to grow in enthusiasm. The crowd was well and truly fired up by the final track, ‘On A Promise’ which ended with the Son’s exiting the stage to cries of ‘More’. More there certainly was, to my knowledge alone, I saw Steve Sync neck at least 8 more pints. Nice.

A new set, & a new line-up. The new member in an increasing succession of bassists is Chris Bainbridge, who was poached (in a white wine & cream sauce) from the now defunct Supermania.

Teething problems having only rehearsed the new set 3 times & coping with Blyth Power’s ‘chunky’ PA took 3 or 4 songs to even themselves out, but the performance was enough to prove that the forthcoming tour is going to be frightening to say the least! 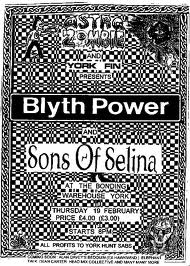 Kicking off with Shower Scene… off the new album & then into Existing Services which for some unusual reason was only getting it’s 1st live performance, & then into On The Horns Of A Dilemma another new song, you could see how the new set is shaping. You could also see the band, particularly Neil getting more & more wound up because of the sound. The lid blew when they realised that the PA man (Blyth Power’s bassist) was sitting in the van outside during the SOS set, Neil went out to get him during the opening of Shower Scene to get him to turn the backing disc up in the monitors, only to find the keyboards had been turned up to ear bleeding levels, a 2nd time Neil pursued the elusive sound engineer & found him in the van again. With the sound now OK & the band suitably wound up, the Sons ripped through their set with frightening results. The mainly anarcho-punk crowd who were throwbacks from a bye gone era of Crass t-shirts & anti-Thatcher slogans didn’t quite know what to make of the band, but politely applauded when they thought it was the right time to.

The band did their usual stop & shop with no money at a motorway service station, filling their pockets with fried bread & bottles of brown sauce!