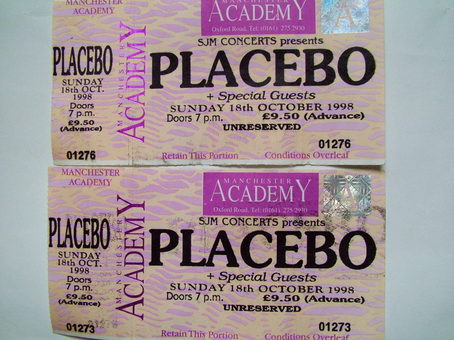 I was so disappointed, I was all psyched up to play football, having scored a wonder goal last week, taking the ball from the feet of Steve Sync, rode the tackle of a defender, drifted to the left of the penalty area & smashed the ball left-footed into the top corner of the near side net, making it a 4-3 victory when our side had been 0-3 down at half time. So when Fatman Slim’s dearly beloved phoned me 2 hours before kick off to say she wasn’t well enough to go to & see Placebo tonight & would I mind accompanying the big boy himself, I of course said yes, wincing at the prospect of missing such a challenging game.
Trying to abuse our privelidge of parking in the BBC car park we found it closed & had to slum it at the nearby hospital facilities.

The past came rushing back to me all too soon, from the days of seeing Alien Sex Fiend in Manchester & being amongst hundreds of goths & rubber bound gothettes in leather jackets, basques & fishnet tights. Only the Bauhaus & Cure logos have been rubbed off big sisters’ old leathers with white spirits & replaced by Placebo, Nine Inch Nails & Marilyn Mansun sportifs.

Every male wanted to be a Brian clone, the dyed black hair parted in the middle with a bit to cover the eyes, the black eye-liner & the black or purple nail varnish. In fact, the Placebo front man himself could have mingled to watch Ultrasound in the crowd, as no one would have recognised him amongst his worshippers. 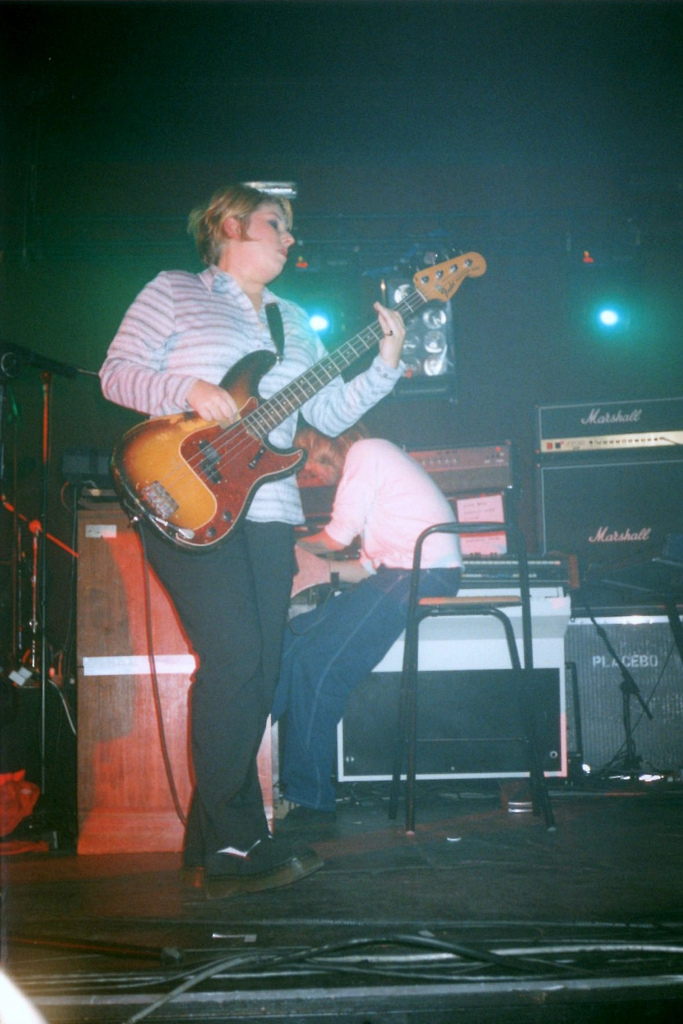 Ultrasound were Fatman’s reason for attending tonight’s bash & I was pretty interested in seeing them, having heard them on Radcliffe’s show, though I must admit none of the songs sounded familar. Fatman described them as a 20 stone Brett Anderson, a mad Bernard Butler, a female bassist (pic above) with a good voice who thought she was great & a keyboardist who’s just finished touring with Hawkwind. And y’know what? He was dead right. They didn’t get on too well with the crowd for some reason, Fatman said they (the band) were having a bad gig; I was oblivious to all this being far more interested in trying not to breath in as a pair on nobheads burped down each others’ earholes right in front of me, & a real horror chick weighing as much as Ultrasound’s mainman who wouldn’t look nice even if I had the beer glasses on, kept bumping those massive thighs against my would be helpless torso. Fatman was right, the bassist did have a great voice & she used it to it’s full potential during the last number as she screeched ‘wankers’ repeatedly at the crowd; no doubt as a reaction to the reaction that I failed to react to.

The lights went down & up went the unfortuate chant of, ‘Brian, Brian, Brian.’ Not exactly the name for someone who’s fast becoming a rock icon, I mean B.R.I.A.N. for God’s sake! It brings on visions of someone out of Monty Python stalking onto the stage. While the Brians & Brianettes hollered for their hero, I went for a piss in the unisex toilets, I’m sure it said Gents on the door & I know a lot of the lads were trying to emulate the effeminity of their on stage idol, but there was definitely a large group of girls in the bogs; they kept telling the urinating males to wash their hands; Fatman quipped; ‘Why, do you want to suck my thumb?’ And I added; ‘But you don’t ask a bloke to wash his cock before you put it your mouth.’ Had I said that 10 years ago I’d been wiped across the piss-soaked floor, but feminism has taken on a new identity of late; it’s now a woman’s world, they call the [money] shots nowadays & catch them in their mouths. Great innit?

Placebo, fair do’s were really good, really loud, with a bass drum sound that felt like you were being kicked in the stomach which is to compensate for the minimum use of lower notes actually played by Placebo. The bassist, sometimes guitarist, revelled in the occasion, looking as cool as a cucumber & like a slim Paul Simonen of The Clash. Brian, as he’s known to his friends had very little to say to the packed Academy apart from threatening to take someone’s head & camera off them for taking photos. He ploughed through the set, changing guitars for each song as the crowd surfers surfed their way towards the bouncers at the front. The girls in the Gents had earlier plotted to storm the stage with the reasoning that there was enough of them to overpower the 5 bouncers; I waited in anticipation to see Brian raped on stage by 15 nubile teenagers in black clothing, but it sadly never happened.

Excellent encore, the last song is a classic. Go & see Placebo for yourself & find out.
The gig was recorded by the Beeb and broadcast on Radio One