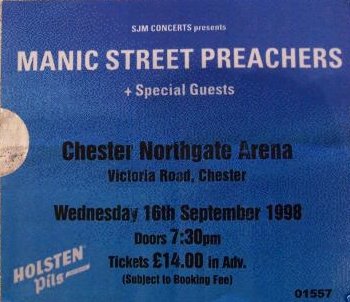 On a tight schedule, had to be at Keith’s by 7pm. Got home, walked if not ran the arse off Devo [my whippet] on the beach, got a McRip-off burger special treatsies tea, dropped dog off at home, tonned it to Bwlchgwyn! Hadn’t accounted for the fact that every man and his Devo drives a tractor out in the leafy suburbs of leafy, picturesque Wrexham. Make it about 10 minutes late.
Got a lift to Chester from Owen, Liz’s younger brother. He taxied Keith, Andy and myself into Chester. To be cool, we fucked off the idea of joining the massive sold out queue, and headed straight to the second nearest pub we could find. Not the closest, due to the fact that they had a complimentary pigeon loft outside for the use of ‘Patrons only!’

So, the Fleece and Fuckin it was! Saw the first half of the Man Utd-Barcelona game in there. Left at half time with Utd 2-0 up, having bumped into Roger Subway and Chris Shark. Small world/penis!

Got to the ‘Venue’, Mogwai had finished, all I can report on them is that apparently the swimming pool had cleared during their set. Apparently the piped live music was disturbing the ‘Ladies night’ veterans of the lagoon pool. Shame! I heard later that they went down well, a good set, apart from the usual sports hall echooooooo!

So there we were, Keith and I, ogling what was left of the ladies night swimmers from the upstairs bar, Roger Subway came over and busted us! Rich coming from him, Chris Shark was spotted in the corner just changing out of his Speedo’s! A man for every occasion.

Upon hearing the bass strings starting to shake the whole of quaint, historic Chester, Keith and I made our way, sharpish, downstairs to the arena. We got in there just in time to see the Manics enter from stage left.

‘Hello to the borders’ was James’s opening line, it went down well, but it has to be said that owing to the popularity of the Manics at the moment, combined with the fact that they were playing a venue 10 sizes too small for their loyal following, had he have said ‘This ones for the children’, it would have drove the elitist audience crazy!

Tolerate opened the set. Hard for me and Keith to make any progress into the mosh pit, as there was no real movement. Un-nerved at being both a mile away from the stage and pint-less, we both stood still and took in the shear atmospheric volume and emotion that the song, not only deserved, but also delivered. And delivery is a rare beast in these types of venues. Respected acts such as Geneva, Mansun, Morrissey and Peter Andre had all found to their cost that a sports hall requires both a quality sound engineer and a smidgen of talent. Fortunately for the Manics, the sound was in the capable hands of Cemaes Bay’s very own Tegwyn Phillips, and as for the talent…Say no more!

Everything Must Go signaled Keith and I’s dash to the ever-developing mosh pit. I got right into the tried and tested, formulaic set that represents a Manics gig. True, they do like to please the punters with a greatest hits package, but they are also very astute in feeding in a few newies, just at the right time, just as the participants of the pit are starting to turn purple, they cleverly chuck in a new song. On this occasion, they included the atmospheric and mesmerizing Ready For Drowning, the beautifully bouncy You Stole The Sun From My Heart, and a calmingly re-assuring version of The Everlasting.

Not wishing to disappoint, if they ever could, Faster was thrown in, purely to change the audience’s position around. A number made their exits by surfing over the crowd, a lot got dragged over the barriers by the ever caring security apes, and most of the headbangers realised that at the ripe old age of 30 something, they should be at home grooming Tiger Tokens!

Enough said! Next up came a blitz of Motown Junk, Kevin Carter and Australia. The latter leaving me on my back in the land of oblivion, only to be saved by a pair of local girls appropriately clad in camouflage gear. Thanks ladies!

I’d lost Keith by now, no worries, we were both on a plane that didn’t require any idle chit chat, no need for niceties, this portion of my night, if not my life was given over to the ultimate in chat down songs, the lowest of the low in terms of Samaritans Christmas parties, the highest of the high in terms of agrophobics weddings, yes it was time for Motorcycle Emptiness.

True, time stands still at moments like this, feelings revert to fetal memories, each heartbeat last for an eternity, each breath breathes deeper than can be imagined, each movement is so under-exaggerated, you almost wonder if you are suspended in animation…

Or are they? Of course they fucking are! They are everything that is aesthetically pleasing, they are that deepest breath of fresh air, they are that foetus floating in a bath of affection, they are that animated suspension and, yes, they are Welsh!

I find Keith again, A Design For Life cements the bond between all of the crowd tonight. Cries of ‘Wales, Wales’ from the audience are silenced with James’s response, ‘There are some English in here tonight!’.

True, there are some English in, but who fucking cares? Wales is no longer depressed, Wales doesn’t have to apologise for their attendance, Wales doesn’t have to bow their heads anymore, Welsh people can use their eyes again, look at us, we can see, we can see the horizon. Let the playing field be like the old home ground of the Connahs Quay Nomads! Slightly tilted in our favour! Let us milk it! Praise be to James, Praise be to Nicky and give it up for Seanus Moorus!!!!!

So back to Keith’s it was, played with Bill Dog for a bit, surfed for a bit of smut, stepped over a female schoolteacher and ended up with aching calves! S.Y.M.M. (FAIRZIFF)