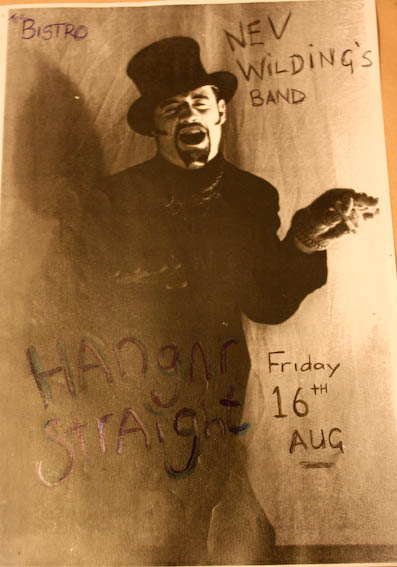 Nev was a psycho hairdresser from Prestatyn who ended up playing in The Fall.

Occasionally a star or two in the making would tread through The Bistro in Rhyl and local anti-hero Nev Wilding was one such star. He ended up plying his trade with Mark E Smith in The Fall.

Nev (who is Spencer Wilding’s brother) had a London based band called Hangar Straight who returned home to play the Bistro on 16th April 1996 and again on 16th August. Jon Treganna played with the band and also recalls appearing in Rhyl at a gymkhana,
‘I remember the flat above the Bistro. Several people sitting in silence handing various substances around a large low table. Totally ignoring us though! Then next day Nev made the whole band and miscellaneous hangers-on jump off the Betws-y-Coed bridge, which was the scariest thing I’ve ever done.
‘He was a talented boy, brilliant lyricist, but unfortunately was living the dream before actually making it. A&R men would turn up to hear us rehearse in Nev’s warehouse in Islington; no sign of Nev. He’d turn up an hour late, totally smashed with a couple of giggly ballet dancers. He’d then tie them up and take Ketamine… At this point we all felt it best to leave.’

In 1989, my fanzine Crud was hitting the headlines left, right and centre, I met Nev through a friend. He was barking fucking mad, but in an ace way. He worked at a hairdresser’s in Prestatyn called the Aqua Clinic and I used to hang out there for a cup of tea and some crazed banter.
They put an advert in my zine that said, “Get Your Hair Butchered at The Aqua Clinic”. Nev and the owner, Mike wanted me join them in a siege, where the shop would be surrounded by armed police and we would make anarchist statements to the media! Just for a laugh…
…Like I said, barking fucking mad!

Despite several drink-drug-addled stories of his Fall days, where he and Mark E Smith would have fist fights, Nev survived to do session work with Miss Dynamite and I’ve also found some of his later work