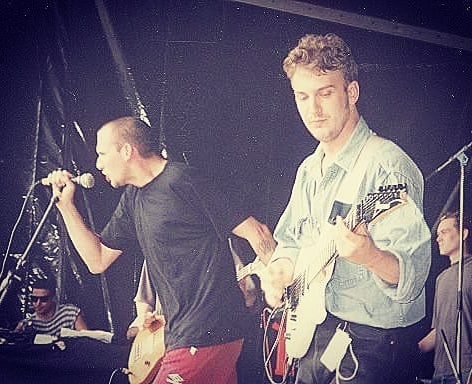 The band tried in vain to get a gig for the inbetween the 3 Dutch gigs but to no avail, so they had a day off sampling the delights of Amsterdam.  There was still animosity from the previous gig, no food, no drink, no towels for the shower. Neil explained;  ‘We all had to use Rob’s towel, I was 4th in the queue so you can imagine what it was like after Martin, Bonehead & Rob had used it, I also felt pretty bad about having money when the majority of the band had none, so I bought them all beefburger & chips to keep them alive.’
Neil had visited Holland over 20 times in the past & he & Steve voted to mind the van, equipment & a crate of bottled lager while the rest went to sample the delights of Amsterdam’s Warlock hemp etc. Bonehead & Martin staggered back a little later & took over babysitting, so that Neil & Steve could spend an hour gawping in the red light district.  There was an offer to spend the night at a squat in Den Haag but the band elected to stop at Katwijk-an-Zee, a religiously quiet seaside resort.

Travelling through the small town with the van’s side doors open roused the attentions of a Traffic Cop, who, in true Judge Dread style told the occupants to get out of the back as it was illegal to travel in the rear of a van with no seats.  So they made their way to the beach & the 2 vehicles soon followed after giving the cop a wide berth, a beach party ensued complete with deck chairs, pot, beer & Martin playing guitar through Robin’s miniature Marshall amp.

The following day:
Cumi, Jane, Claire & Jeff stayed in a hotel & by 9.30am they hadn’t turned up to leave with the rest of the band to travel to Den Haag.  It must’ve been a good party as Martin, Bonehead & Steve slept in the van, Neil slept in Cumi’s car, Wayne slept under it, Rob woke up in a changing chalet & Robin was found ½ a mile away in some sand dunes.
The Sons arrived at The Vlietpop Festival, they were the 3rd band on that afternoon so they knew it wouldn’t be that busy.  Koos Cocaine had arranged a squat gig for the Sons & Kava Kava in the city for the evening, but because it wasn’t due to start until midnight & the band had to be in Calais before 6.30am they had to give it a miss.  The PA man for the squat gig wanted Rob to drive him into the city, drop all our gear off at the squat to enable him to collect the PA from 2 different addresses.  Rob refused.
After an interview with a Dutch magazine the band played the same set as on Thursday night in the searing sunshine, Neil went walkabout during On A Promise which had the Dutch photographers clicking.

After being paid 1,000 guilders the band relaxed for the afternoon by the lake & then dined with the Delerium Records delegates & Porcupine Tree.  Steve Sync also announced that it was pay back time & nicked a crate of beer from their dressing room.
The journey from Holland to France was interesting as Rob the driver realised that smuggling Amsterdam’s finest Warlock cannabis resin into the UK was an offence & had to smoke it all before getting to Calais.  Steve and Neil sat in the front of the van with him; ‘To say I shat myself was an understatement,’ said Neil. ‘Rob’s driving didn’t instill much confidence into us at the best of times, but to sit next to him driving & smoking spliff after spliff after spliff will remain in my memory forever, and neither Steve or myself touched the stuff so we couldn’t help him; he was totally blitzed!’
A swift assault on the Calais hypermarket & another special blag to get Robin through passport control & the Sons were back in Britain.