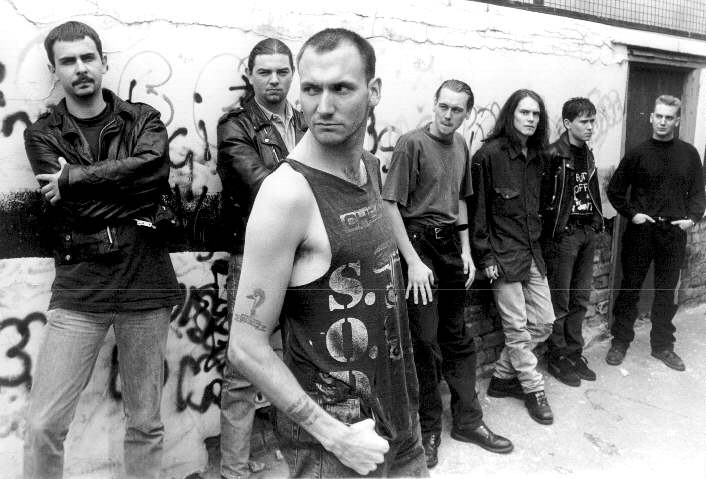 (taken from Crohinga Well magazine – Belgian)
Four years, 3 singles, an album & BBC Radio One session after forming, the Sons Of Selina play their 1st hometown gig. Why?
‘There’s a local band mentality in Rhyl which we try to avoid at all costs,’ explains Neil. ‘Every town has it but you don’t notice so much when you’re from outside the area. Plus I fell out big time with a band I used to play for, to the extent of violence and threats between us.’
He continues. ‘I’ve not had much opportunity in the last couple of years to see any local bands, there’s always a rivalry between local bands for some odd reason; why? What are we competition for, what is there to win?  The only band who I have seen recently & really enjoyed are The Fluff.’

(from ‘This Patch of Land’)
A few days before this show Neil had expressed the wish to project a video he had compiled with Dave The Rave (ex-PSST) onto the stage over the band, this was going to be technically difficult to achieve on a Delerium Records type budget, so Bonehead suggested that they use TV screens set up behind the stage. So at the price of £37 an 8-way booster amplifier was set up & 6 TVs mounted behind the stage with wiring done thanks to Roger Bickley (ex-ZODIAQUE UK see Sync).
Steve Jones (one of many) – he of White Tygerz, Heroes On A Beach, Picture House & almost Sons Of Selina fame did the PA.
‘I remember the soundcheck being over by 9pm & we weren’t on for another 2½ hours,’ said Neil, ‘My biggest fear was that the lads were going to be pissed by the time we were due on stage, Robin was on his 2nd pint & I always remember the PSST incident when he found himself arrested on 7 charges. So I took them all to my house for a couple of hours. It was nice to see over 250 people bustling around the place on our return to The Bistro, at £2 a head I make that £500, £170 paid to us mean’t a nice profit in the Trehearn’s back pocket.’

SOS line up for this gig was Neil- vocals. Robin- guitar. Martin- guitar. Bonehead- guitar. Ken Mayanardis- bass. Steve- keyboards. Cumi- drums.
The following morning the band were ousted from their beds by Delerium who insisted they did a photo shoot, the results of which now decorate their web site.
The NME boasts an advert: SONS OF SELINA: AVAILABLE FOR WEDDINGS, FUNERALS & CHILDRENS PARTIES (WE NEITHER), in the small ad section as well as a ¼ page Delerium advert for Nour D’oui.