Sync were formed in 1990, by Steve Robins (keyboards and programming) (pic above) and Dave Evans (vocals).
Investing their savings in some midi keyboards sequencers and mixing equipment, they took their original sound, to a higher, more professional level, recreating the same sound live as they did on recordings.
In keeping with the same band behaviour & sensibility as the previous bands they had formed, they retained the same low profile & stayed out of the local band scene to concentrate on writing enough good material & rehearsing their live set until they had achieved that special sound they wanted; usually described as synth pop with a hard edge.
Sync knew full well that there was no other band like them in North Wales, so they had a good chance of people & media taking notice of their originality, without the boys themselves trying too hard to promote themselves.
They weren’t desperate for fame & success like other bands around at that time, they preferred to take a back seat position in the local band(wagon) scene, supporting bands rather than organising & headlining gigs. This was to purely show to punters & press that Sync had a far better live sound than most other bands on the scene. This way, they didn’t create too much work & pressure for themselves, after all, Sync was just a pastime which involved a lot of fun & experience in the 4 years it lasted.

Late on in 1990 Sync made their 1st demo tape Machine Against Master & played their 1st gig supporting a local band in the then very popular Bee & Station pub in Rhyl. Steve & Dave had gigged before in previous bands, & had a large portion of the crowd waiting in anticipation for this 1st Sync outing. With their special blend of fast dance beats, guitar samples, sound effects & melodies, Sync went down very well with the crowd, which included people with varying musical tastes.
Sync knew that they had started to achieve their original aims, though, because of the distance they kept between themselves & the local press, they had good reviews but were never hyped like other bands that the papers brown-tongued on a weekly basis. This didn’t bother Sync as they knew that they had something different that gave a breath of fresh air to the North Wales scene- was then full of indie wannabe bands. 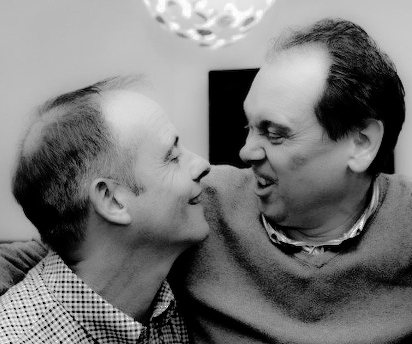 Dave Evans and Steve Sync in 2012 contemplating a Sync reunion
Sync continued to write their brand of songs which started to be influenced more to an industrial sound, playing their tunes live in selected venues up & down the coast. By now Sync were getting more recognition from bands & organisers & were constantly asked to play at various venues, charity events & festivals; of which Sync played very few of because, some of these events were only organised by people who wanted to promote their own bands instead of the charities they were playing for. This wasn’t Sync’s style, instead they played fewer gigs and concentrated more on writing & recording new songs. From this came their 2nd demo tape; Live In The Blue Room. This cassette was recorded in their rehearsal room as a live format meaning, as they would play a live gig but with the quality you’d expect from a studio recording. ‘Blue Room’ included some early songs such as Downfall & Much Too Much & some brand new songs such as Selm3 & ID Smile which showed how their music had matured into a style once described as “Industrial Techno pop!”
Previously to Sync, Steve & Dave with another member- Roger Bickley, formed Zodiaque UK who mainly played cover versions of bands including Depeche Mode, New Order, OMD & China Crisis, who were, & still are big influences. Zodiaque UK only used analogue synths & drum units because they were cheap to buy in the mid-80’s & being 17-18 year olds they couldn’t afford the new digital midi instruments which had taken over. However, the older technology recreated the old synth pop classics such as Depeche Mode’s Just Can’t Get Enough virtually the same as the original. There was always something special about the analogue synths which is why Steve never parted with any of his instruments; in fact he added to his collection whenever he found an analogue instrument at the right price (i.e. cheap!). This inexpensive system soon stopped when analogue came back into fashion in the early 90’s.

By 1992 Steve had been asked to remix some songs by a local indie punk band Psycho Sexual Sex Terrestrials, who had incidentally just sacked Neil Crud as their guitarist. Steve took demos the PSST’s songs & completely re-wrote them on a sequencer using Sync’s instruments & sound. This transformed the original song into Sync’s more modern form. Steve then, along with PSST went into ‘Thunder & Lightning’ Studios (who, as Steve explains; “Was complete bollocks.”) in Blaenau Ffestiniog & recorded the tracks with PSST guitars & vocals over the top.
PSST (Psycho Sexual Sex Terrestrials) then changed their name to KKKK & with this new material started a promotion campaign & with another name change (GMX Stuns) & more members took them onto Welsh TV , got them a management deal.
Soon after this collaboration Steve got asked to work with other bands & through this, met Neil Crud (Birchall) through Andy Fatman. Neil was looking for a keyboard player to use for live work to promote Sons Of Selina’s debut album Nour d’Oui – starting with a live Radio One FM session on Mark Radcliffe’s night time programme. Steve jumped at the chance & after a couple of months of rehearsing he played his 1st gig with the band live on Radio One.
After this the band gained more bookings, taking them to London & couple of dates in Holland, & by this time had achieved the immense wall of melodic sound that is Sons of Selina, particularly on their second album ‘Fire In The Hole.’

Steve’s analogue collection was later widely used on all the Sons of Selina, Affliction and Alien Matter‘s material. You can know find him tapping the keys for Llandudno’s Courteous Thief.