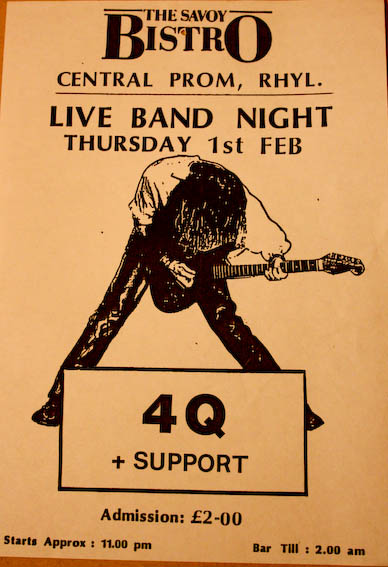 What a way to mark 4Q‘s 50th gig! Alas Y Cyrff didn’t think so, although I quite enjoyed some of their songs, they followed the trend of 4Q support bands and got a bad reception with people shouting our name, which is bad cos it makes us look like twats (or more twattish than we already are…). Promoter Martin Trehearn was shitting himself with people telling him he’s an idiot to put us on as we’d wreck the place. How wrong they were, and slowly but surely we’re beginning to be taken as a serious band without losing that 4Q brand of psychosis.

This was one of our best gigs (I say this all the time). A great set up using The Bistro’s lights and dry ice. The set was the usual one with VD as the encore. The 7th time we’ve played in Rhyl. Gumpsh & Robin’s 5th gig for 4Q, Cumi’s 42nd & Matt’s 30th.

(Neil Crud 2014)
Oh the irony! ‘4Q + support’ – how can you dub a band as prestigious as Y Cyrff as ‘support’ ?! It’s embarrassing now to read back on that Crud Diary entry from 24 years ago; the folly of youth! That over enthusiastic excitement of being in a band; of being heroes in our own backyard.
I don’t think Y Cyrff spoke to us on the night, nor did we speak to them, in fact I don’t recall EVER speaking to them in all the times our paths have crossed. They were too cool and I was too ignorant.
Soon to be propelled to the dizzy heights of No.1 albums and selling out stadiums as Catatonia, they paid sarcastic homage to the seaside town in the song International Velvet, with the lyric (translated) ‘I found true paradise in Rhyl.’

Question is… Did that night at The Bistro inspire the lyric for International Velvet ?

Cyrff never got the same interest as they did elsewhere (it wasn’t the band, it was Rhyl) – as Catatonia they also played in Catz (club under the Westminster Hotel) in Rhyl just before the release of Mulder And Scully.