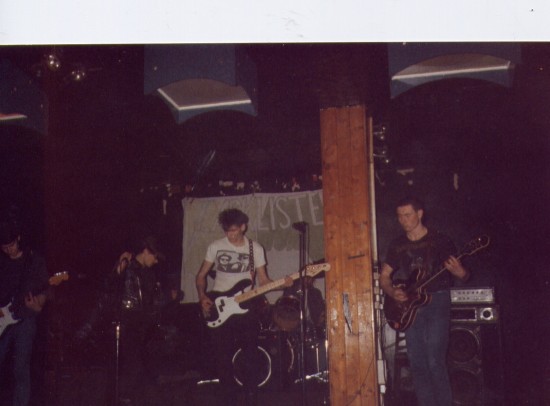 (from Crud Diaries)
When we got there a crowd of about 20 way out punks who had all bought Crud fanzine over the years were there to greet us, so we thought we were in for a busy night. But apart from Danny Williams [later to be Black Grape‘s bassist] , John Casey & friend showing up no one else came!

Black Listed went on first, playing heavy rock with American accents and rock star swaggers! I don’t mean that nastily it’s just that they’d do a lot better being themselves. Still, they’re good for a giggle and put us to shame in the songwriting and playing departments – just the wrong genre!

I enjoyed myself much more tonight in front of 30 people than I did in front of over 500 last week, there was loads of humorous exchanges with the crowd. The set LSD, MENTAL ASYLUM, I HATE TV, BAT GOOCH then we had to resort to STAND BY ME as Matt destroyed his third bass pedal this week (no shit). BURN IN HELL, POO ON MY SHOE, IMAGINE, WE WANT YOU, in which my bass just fell off! 4Q BLUES.

There was a bit of hassle at the end concerning room hire as the landlord appeared with a 7′ wide bouncer asking for £20. Somehow I talked him into accepting a tenner and a promise of forwarding the difference next week, heh heh heh!!