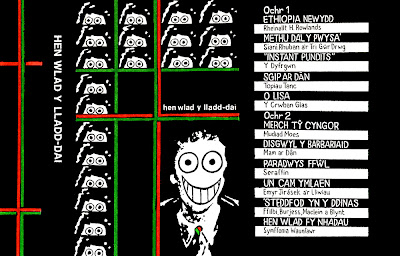 Geraint Jarman a’r Cynganeddwyr‘s 1979 LP Hen Wlad Fy Nhadau (Old Land of My Fathers) is widely considered one of the milestones in the development of contemporary Welsh language rock music. In 1990, the Ankst label decided to pay tribute to the record by commissioning several Welsh acts of the day to reinterpret the songs for a similarly titled tribute album. What we have here is not that album…

Rival record label Central Slate saw the proposed line-up for the tribute album and despite the presence of the excellent likes of Datblygu and Llwybr Llaethog, deemed the selection to be too safe and predictable. Spurred on by a suggestion from Geraint Jarman himself, the label decided to release their own version of the album and sought out eleven far more underground groups to interpret the songs. None of the acts were widely known at the time and in fact only Rheinallt H. Rowlands went on to greater things afterwards (this being his first ever appearance), but the versions on Hen Wlad Y Lladd-Dai (Old Land of Cemeteries) proved to be far wider ranging and far less reverent than those that appeared on the Ankst compilation. In an extra mischievous coup, Central Slate actually managed to release their version a few days before Ankst!

While the acts on the rival release largely stuck to Jarman’s original rock/reggae approach, the acts here take far greater liberties with the songs, displaying the inherent ability of classic songs to allow for endless reinterpretation. From Rheinallt H. Rowlands’ Scott Walker styled orchestrated epic to Symffonia Waunfawr’s Portsmouth Symphonia tribute via Mudiad Moes’ infectious synthpop and Y Crwban Glas’ Madchester groove, the songs take on a new life and became utterly contemporary in 1990’s music landscape. Czech born Welsh learner Emyr Jirásek clearly displays the regard in which The Velvet Underground were held back in his homeland and Ffilbi, Burjess, Maclein a Blynt bring a pummelling industrial groove to ‘Steddfod yn y Ddinas. Here then is a lost classic that showcases the range of truly underground talent that existed at the very peak of the Welsh language music scene.