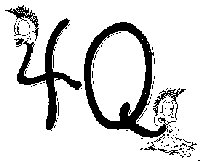 A real one to get their teeth into; in their quest to play in as many obscure places as possible (let’s face it, the mainstream venues wouldn’t put the group on) 4Q make a 2nd attempt to play at The Village Inn, they fell foul to their own publicity when they tried to play here earlier in their career under the name of the Four Quavers, only to be smoked out by an anonymous phone call.  Neil phoned the Village Inn to say he was Ian Bradshaw of SAJ Promotions & that Johnny Rawhide & The Cowhorns were a Status Quo type band with a bit of comedy thrown in!!!
Cumi, being the front man was quite understandably nervous.
They started with a slow version of Nein Werk but after the 3rd song the landlord walked on & asked if they got any better, after a long discussion he told them to knock it on the head & paid them £20.  4Q didn’t mind but the VD Crew who had travelled up were pretty pissed off. Someone mentioned that 4Q would’ve gone down much better in the pub next door, so Matt’s mum (an influential character) asked the landlord of The Castle if this could be done. He agreed as long as the band didn’t swear.

The band quickly set up & Cumi said to the audience who had left the Village Inn empty; ‘We’re not really the Cowhorns, we’re 4Q’ and another set was thrashed out. After the band had murdered God Save The Queen up went the chant ‘VD VD VD’ so the band obliged & the punters finally got up to dance, so 4Q continued.
After a 2nd encore they downed their instruments for the night amidst the shouts for more, but they were knackered.  The landlord said 4Q were welcome back any time provided Cumi doesn’t swear.