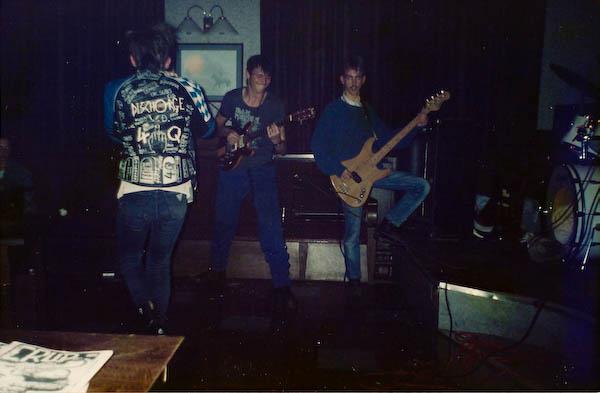 (pic not from gig)

How does a group already banned from a venue play there again?  Easy!  Change their name.  4Q advertised the gig in their home town of Colwyn Bay which ensured a busy night at the Bee.  Neil’s transvestitism took a new turn when he showed up in a flowery dress, fishnet tights & of course jackboots.

This was the best I had ever seen this unit of 4Q play & I truely believe that had these 4 carried on they would have gone places (Runcorn), they were slick, as tight as a duck’s arse, wholly entertaining & an attitude that could turn whichever way the audience reacted.  Tonight the audience reacted with amazement at the professionalism of this once bunch of yobs.  Oh yes, the yobbishness is still there, but you you could tell from the moment Matt jumped on stage & started playing the opening drum beats to the latest 4Q offering Poo On My Shoe then followed by Wayne who pumped out the bassline, that there was an air of confidence even from these 2 normally quiet & reserved half of the 4 piece.  Matt explained later that he was surprised they looked so confident as they had just stepped out of the dressing room (which was the beer cellar) having to get changed next to a tethered alsatian that looked very hungry.

The song Poo On My Shoe is by far the best produced so far by the band & also the 1st that all 4 had written together, with the bulk of their other material having being penned by Neil.  But like I mentioned earlier, it was such a shame that this unit split after only one more performance as they had really got it right this time.