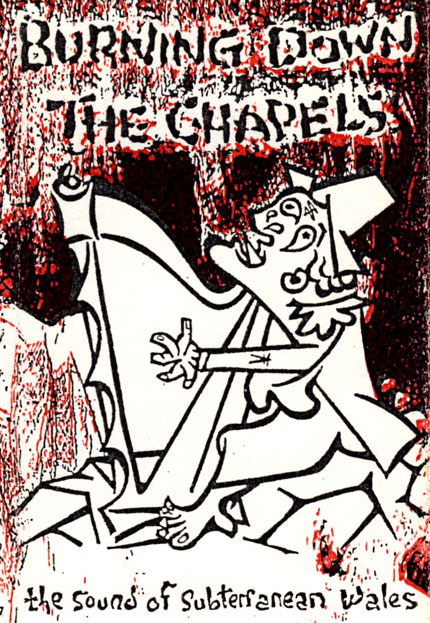 Burning Down the Chapels was a compilation cassette released by Central Slate Records in 1988, containing 19 tracks by 10 of the more interesting Welsh groups of the day. All the songs included were specially donated by the bands and were all unreleased at the time, although Traddodiad Ofnus‘ Hunangofiant was later to appear on a 12″ EP on the Constrictor label. One of the two Crisialau Plastic tracks also appeared on that group’s sole release, a self released four track cassette EP, and The Lungs‘ contributions were included on their retrospective compilation. Apart from those, all these recordings remain otherwise unreleased. 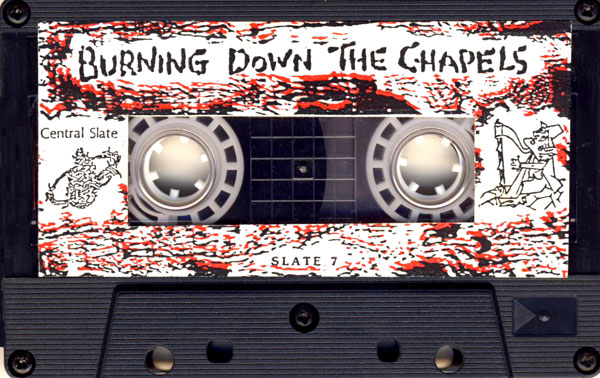 Of particular interest are three exclusive dub remixes by the legendary Datblygu, two of them are the tracks Brechdanau Tywod #1 #2, their already pretty rare contribution to an Artists for Animals benefit EP, and Ynrwsgwrs from their just released debut LP Wyau.

The two Cut Tunes tracks provide a rare glimpse of the line-up that existed between the two vinyl releases from 1985 and 1989. This was a period when the group were playing live constantly and would regularly get out of the area to play London gigs. They are captured here at the peak of their powers.

Although the two Fflaps songs on the compilation appeared on the group’s debut LP shortly afterwards, they are captured here in earlier versions, Chwildroi’n Gam in particular featuring a quite different arrangement.

Two groups, A.P.V. and Radio 23 make very rare recorded appearances here, although both would have been familiar to gig-goers in the Bangor area at the time. Radio 23 was the brainchild of Maeyc Hewitt of The Lungs, and their song It will be familiar as the very same song that appeared almost 20 years later on Nixon & Jarvis‘ 2007 LP Untilted under the title Reason.

A.P.V. or Another Perfect Vegetable in full, were a duo (or occasionally trio) from Anglesey who unleashed a whirlwind of drum machine driven fuzz guitar and garage organ. Taking their name from a line in the Mekons‘ song Beetroot, they came across more like a thrilling hybrid of Husker Du and Suicide. A limited self released cassette entitled A.P.C. was released, containing 8 songs, including a different version of Tell Me Something.

Crisialau Plastic were a short lived trio from Aberystwyth, making one TV appearance performing Pryfaid on S4C and releasing an excellent cassette EP in 1988. Members went on to form Pop Negatif Wastad and Mescalero. 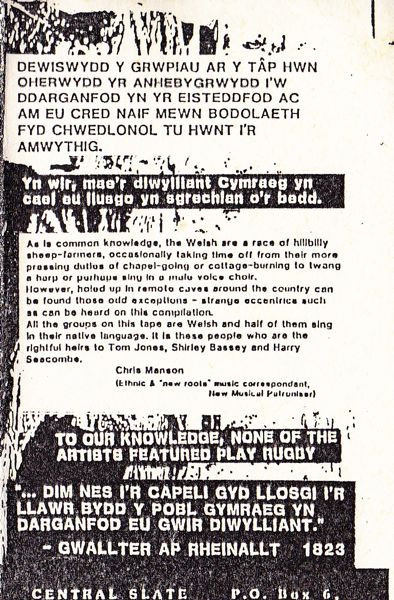