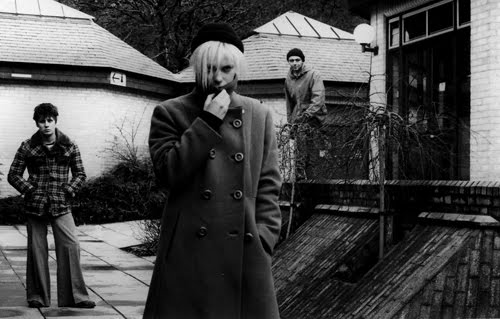 (taken from http://turquoisecoal.blogspot.com)
Fflaps formed at the very end of 1986 as an outlet for the songs of Ann Matthews, who had previously played with Alternative Destinations, Cut Tunes, Kärnarvøn Kästle and a seemingly un-named duo with Scott Saunders in addition to making guest appearances on recordings by Glass, The Casio Kid and Miracle Cave.

Initially named Picasso’s Mind, the group was completed by Alan Holmes from The Lungs and Rick Joslin, previously of Third Spain. By the end of the year, Rick left to be initially replaced by Emyr Tomos (also ex-Alternative Destinations) and then more permanently by Jonny Evans, who had previously been playing with The Paraletics and Harvey Star & The Moonbeams.

The group began playing regularly around the Bangor area and began to add more Welsh language songs to their set after being introduced to the Welsh scene by groups like Anhrefn and Y Cyrff. At the time it was very unusual for a group to be bilingual, the two scenes having very little contact with each other. In breaking down this taboo, Fflaps paved the way for the success of later bilingual groups like Catatonia, Gorky’s Zygotic Mynci and Super Furry Animals. Sadly they were too ahead of their time to reap much benefit from this approach themselves, encountering a degree of ambivalence from both sides of the divide. The only recorded documentation of that period was an unreleased LP… 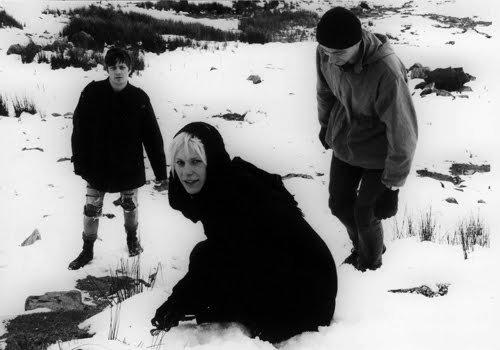 Following a few months of playing around Wales and beyond, the group released a 7″ EP for Anhrefn Records and recorded a session for John Peel’s Radio One show. As a result of John Peel’s interest, Geoff Davies of Liverpool’s legendary Probe Plus Records invited the group to record an LP for his label.

The group decamped to Les Morrison’s Unlucky Søn studio in Bethesda on the 25th April 1988 and recorded their entire live repertoire with a minimum of overdubbing and effects. Les actively encouraged the group to mix up the two languages on the songs, and two days later they emerged with the recordings we have here.
Upon presenting the ‘finished’ LP to Geoff at Probe Plus, it was suggested to the group that maybe they could spend a further day in Liverpool adding some overdubs, and also perhaps that the LP would be more coherent in one language. The Liverpool session with engineer Kevin Wright transformed these recordings into what became the LP ‘Amhersain’. The record was as a result more quirky and psychedelic, but the original mixes by the late great Les Morrison more faithfully capture the live essence of the group at the time. In the highly unlikely event of there being a deluxe expanded 23rd anniversary edition of ‘Amhersain’, this would certainly be disc 2!